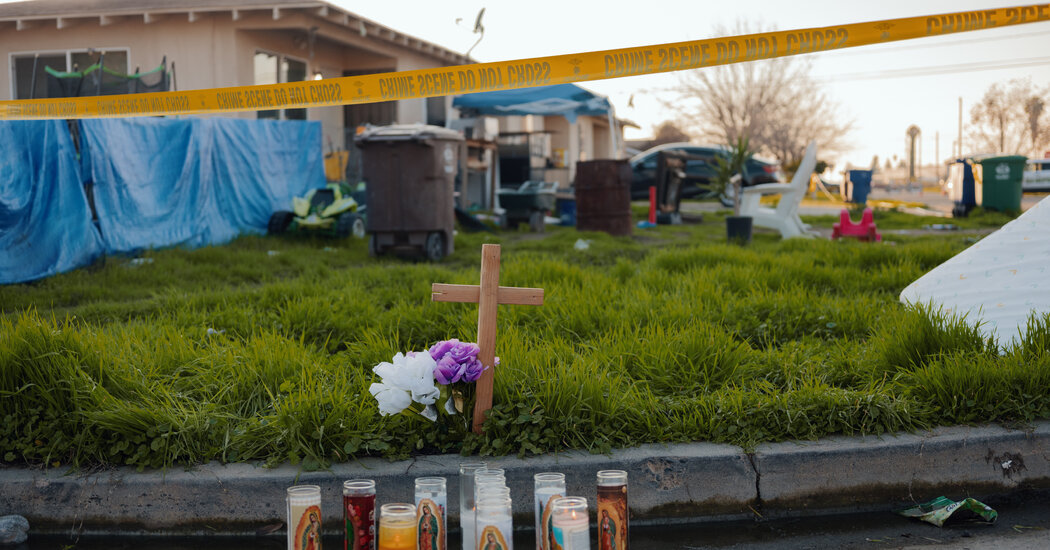 “Cartels try to avoid big, spectacular acts of violence in the United States,” he said.

In the Central Valley, an array of affiliates of the Sureños and Norteños gangs distribute opioids, marijuana and other drugs.

The carnage last week unfolded in a house that was known for drug activity.

On Jan. 3, police officers conducting a parole compliance check found shell casings on the ground outside the house and then returned with a search warrant and arrested the elder Mr. Parraz, who later became one of the victims. They found an assault weapon, a rifle, ammunition, methamphetamine and marijuana at the house, according to court documents.

Mr. Parraz was released four days later, after posting $50,000 bail. Sheriff Boudreaux said it appeared that Mr. Parraz was not the intended target; another man who was not at home when the killings took place was.

One man who has known the family for years, Eric Cortez, said the incident had been a shock for the community. “They were good people who didn’t deserve such an ending,” he said.

The authorities continue to search for two gunmen who fled the scene before deputies arrived, seven minutes after the first call to 911, and they have offered a $10,000 reward for tips that could lead to their arrest.

Among the questions that are still unanswered by what law enforcement officials have disclosed so far: Were drugs being sold on another group’s turf? Were there people at the house who were perceived as police informants? Was someone in debt to drug suppliers?

The Drug Enforcement Administration and the Federal Bureau of Investigation have stepped in to assist. On a recent afternoon, detectives, holding brown bags containing evidence, emerged from the house where the killings had taken place. Unmarked vehicles and sheriff’s cruisers idled in the street, which had been sealed off with yellow tape. On one curb, mourners had placed a dozen candles at the foot of a small wooden cross.