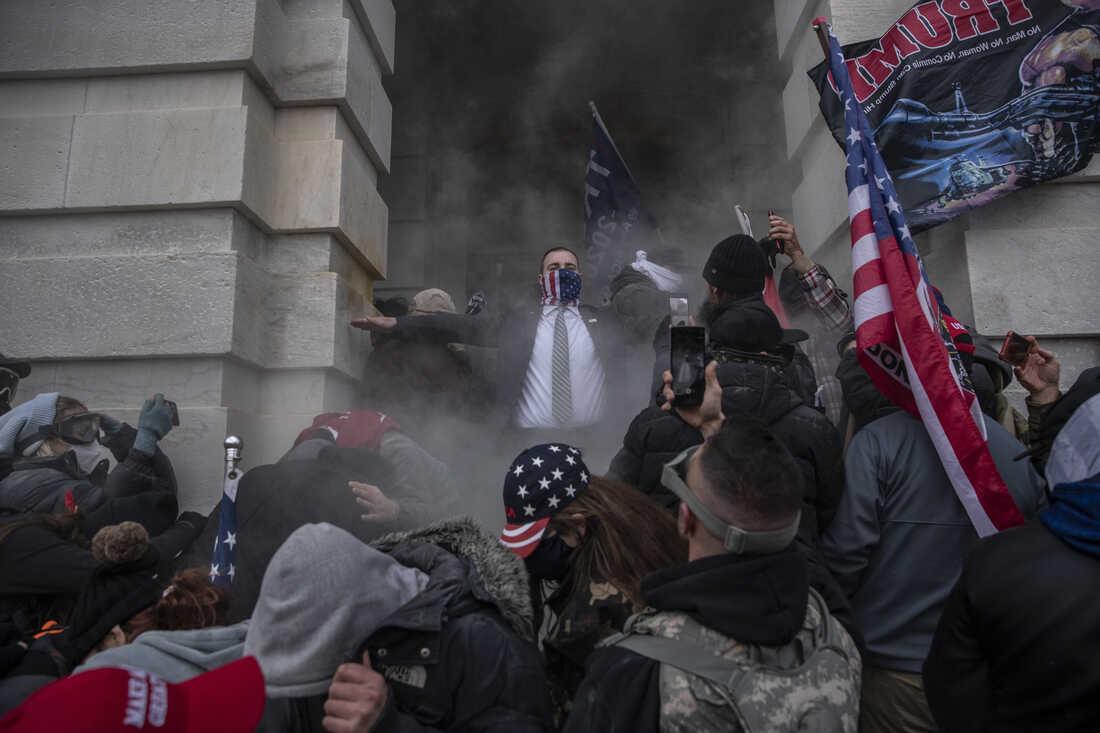 In the year since the Jan. 6, 2021, riot at the U.S. Capitol, federal prosecutors have charged more than 700 people related to the attack. Bloomberg/Bloomberg via Getty Images hide caption 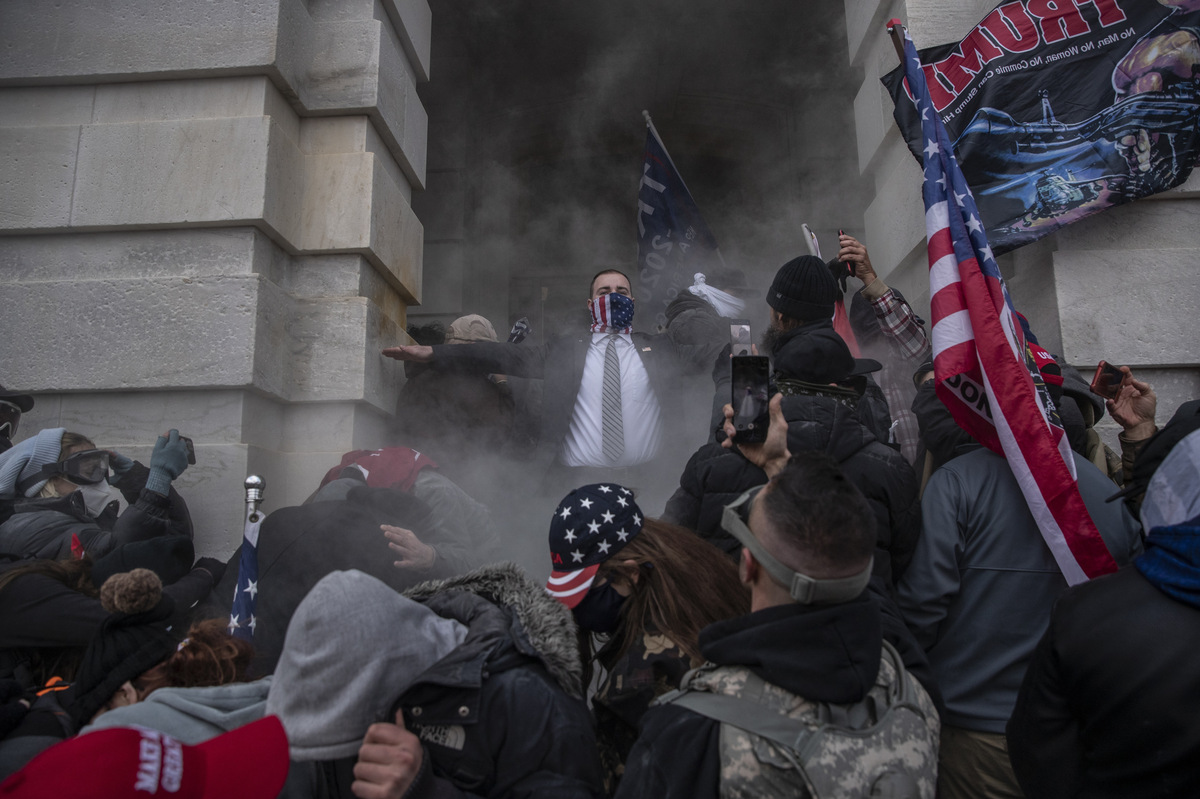 In the year since the Jan. 6, 2021, riot at the U.S. Capitol, federal prosecutors have charged more than 700 people related to the attack.

By now, the date is lodged in the collective national memory: Jan. 6, 2021, when hundreds of Trump supporters stormed the U.S. Capitol in an attempt to disrupt the legitimate transfer of power from the former president to whom they had pledged loyalty to current President Joe Biden. Rioters shattered windows, assaulted woefully undermanned police forces, and sent lawmakers and aides fleeing in fear of their lives.

In the months since, federal prosecutors have charged more than 700 people related to the attack, with new criminal cases introduced every week. NPR has been tracking each of these, collecting information on the people facing charges and following the eventual outcomes of their cases.

Here are some of our main takeaways from that data, one year later.

The rioters came to the nation’s capital on Jan. 6 from all over the country. They traveled to Washington, D.C., by bus, plane, train and car, some traveling thousands of miles to get there.

Those facing charges hail from at least 46 states, plus D.C. So far, no rioters from Nebraska, North Dakota, Vermont and Wyoming appear to have been charged.

Conversely, people from California, Florida, New York, Pennsylvania and Texas account for more than 40% of the rioters charged, with more than 50 rioters coming from each of those five states. It’s important to note, however, that those states are also the most populous in the country and the proportion of rioters from them is not disproportionate.

The group of people charged are difficult to generalize in other ways beyond geography. They work or worked in a wide range of careers, including small business owners, nurses, teachers, the CEO of a marketing firm, and an actor who appeared on the television show Friday Night Lights, among many others.

There does exist one key commonality among the crowd, though it’s one that’s more difficult to attach a definitive number to: The majority of the rioters appear to be white. Many of those charged also appear to be men, though a sizable minority are women.

The rioters were also relatively young. In contrast to a narrative that many of them were “Boomers,” at least three quarters of the rioters charged are under the age of 55 (the youngest Baby Boomers are now 57). According to NPR’s database, at least 134 people were under age 30.

A quarter of those charged are accused of physical violence

Early on, it was clear that the Capitol riot was violent. More than 140 police officers suffered injuries at the hands of the mob. Still, as the Justice Department has released more and more videos of the attack, and additional charges have been filed against rioters, it’s become increasingly clear just how violent that day was.

Prosecutors have charged more than 187 people — roughly a quarter of all defendants — with committing violence, such as assaults on law enforcement or members of the media present that day.

Capitol Police Sgt. Aquilino Gonell was present for some of the most violent clashes that day. He told members of Congress, “What we were subjected to that day was like something from a medieval battle. We fought hand-to-hand, inch-by-inch to prevent an invasion of the Capitol by a violent mob intent on subverting our democratic process.”

Some pro-Trump commentators and politicians have asserted that the rioters were “unarmed.” This is false.

“The objects thrown at us varied in size, shape and consistency, some were frozen cans and bottles, rebar from the construction, bricks, liquids, pepper spray, bear spray, sticks of various widths, pipes, bats, some were armed with guns and some had tasers or something similar,” one unnamed police officer testified to Congress. “I specifically remember being sprayed with bear spray at least 6-8 times while tussling with rioters who were trying to use the bike racks against us as weapons.”

Capitol Police Officer Michael Fanone has said he was shocked with a Taser several times, which led to a heart attack, and that rioters threatened to take his gun and shoot him with it.

Prosecutors have also cited evidence that some defendants brought firearms to the Capitol grounds, though not inside the building itself. Former Drug Enforcement Administration agent Mark Ibrahim was charged with bringing a gun onto the grounds.

Prosecutors have also presented photos in court documents of Guy Wesley Reffitt with a holster on his belt, which the government said held a Smith & Wesson pistol.

Judges have also made clear that they are treating allegations of violence against police as among the most serious stemming from the riot. Scott Thomas Fairlamb of New Jersey pleaded guilty to allegations that he shoved and punched a police officer, took a police baton, and yelled “What patriots do? We f****** disarm them and then we storm the f****** Capitol!” U.S. District Judge Royce Lamberth sentenced Fairlamb to almost three-and-a-half years in prison, one of the lengthiest prison terms so far.

Many of the accused appear to have military or police backgrounds

A few weeks after the Jan. 6 riot, NPR first reported on the disproportionate number of people facing charges who appeared to have U.S. military histories. Back then, we reported that around 1 in 5 people charged had served or were currently serving in the military, which is nearly three times the proportion of veterans in the general population.

Though the percentage has gone down since that initial reporting, it is still high: Around 13% of those facing charges have military or law enforcement backgrounds. Those facing charges served in nearly every branch of the military, including the Marines, Air Force, Army, Navy and National Guard. Among the accused are current and former police officers from police departments serving places as large as Houston and New York City and as small as Rocky Mount, Va. There were friends who served together in the Marines, a cadet at The Citadel, veterans of the wars in Iraq and Afghanistan, and at least one recipient of the Purple Heart.

According to an April 2021 report by the George Washington University Program on Extremism, rioters with military experience were about four times more likely to be part of far-right extremist groups like the Oath Keepers and the Proud Boys than rioters without military experience. In the aftermath of Jan. 6, Pentagon spokesperson John Kirby called the riot “a wake up call” and the prevalence of extremist views in current and former service members “not an insignificant problem.” In late December, the Department of Defense released a report, determining that “extremist activity within the Department of Defense is rare, but even the actions of a few can have an outsized impact on unit cohesion, morale and readiness.”

Dozens are in jail awaiting their trial, and some have been there for nearly a year

Most of the alleged rioters are awaiting the resolution of their cases at home, but at least 76 people are being held in pre-trial detention. Many of them are charged with more serious crimes, like assault or conspiracy. Some have been held in detention for months, and at least 26 have been there for nearly a year, since January and February of 2021.

Several people facing charges have complained about squalid conditions in the Correctional Treatment Facility in D.C., where around 30 alleged rioters are being held. Many of their complaints over the conditions of the jail were verified in a November report by the U.S. Marshals Service. Those substandard conditions aren’t new, according to D.C. Attorney Gen. Karl Racine.

“Concerns about conditions in the jail received little attention until they were raised, of course, by mostly white defendants accused of perpetrating the January 6 insurrection … That’s not because people weren’t complaining,” Racine said at a hearing of the D.C. City Council’s Judiciary and Public Safety Committee after the Marshals Service report.

So far, there have been 74 sentences — and they have varied widely

Judges have handed down sentences in 74 cases so far, and those sentences have varied widely depending on the defendants’ actions, criminal history (if any), and whether they expressed remorse for their crimes, among other factors.

At this point, a little more than half (55%) of the people who have been sentenced received no time behind bars. It’s important to note, however, that many of the defendants who have pleaded guilty at this stage admitted to lower-level crimes.

Judge Trevor McFadden has handed down the most lenient sentences so far, which include no jail: 2 months of probation for Sean Carlo Cordon of Los Angeles and Danielle Nicole Doyle of Oklahoma City. Each separately admitted to entering the Capitol through a broken window and briefly walking through the building without committing violence or property damage. They both pleaded guilty to “parading, demonstrating, or picketing in a Capitol building,” a misdemeanor.

Judge Tanya Chutkan handed down the toughest sentence: more than five years in prison for Robert Scott Palmer of Largo, Fla., who admitted to assaulting police with a wooden plank and a fire extinguisher. He pleaded guilty to Assaulting, Resisting or Impeding Certain Officers Using a Dangerous Weapon, a felony.

In their remarks at sentencing, judges have frequently acknowledged the “unprecedented” circumstances of an attack on the country’s peaceful transfer of power, and that appears to have played a role in some of their decisions.

Jacob Chansley, who is widely known as the “QAnon shaman,” breached the Capitol and made it to the floor of the U.S. Senate, but was not accused of committing violence. Nonetheless, Judge Royce Lamberth gave him one of the lengthiest sentences yet: 41 months in prison. “You didn’t slug anybody, but what you did here was actually obstruct the functioning of the whole government,” said Lamberth. Chansley has taken steps to appeal that sentence.

“Every day we’re hearing of anti-democratic factions plotting violence,” Chutkan said at Palmer’s sentencing. “It has to be made clear that trying to violently overthrow the government, trying to stop the peaceful transfer of power and assaulting law enforcement officers in that effort is going to be met with absolutely certain punishment.”

The first trials of Capitol riot defendants are set to begin this year, and there’s a good chance they will have a major impact on sentences. Because of the controversial principle known as the “trial penalty,” people who take their cases to trial and lose face much stiffer sentences than those who plead guilty. That factor is likely to weigh heavily on the hundreds of people still working their way through the criminal justice system a year after the insurrection.