AUSTIN — Gov. Greg Abbott is resisting staunch conservatives’ pleas that he declare a migrant “invasion” is under way at the nation’s southern border.

Also Wednesday, Abbott disclosed that Texas has donated spools of razor wire to Coahuila, a Mexican border state. For weeks, to deter unauthorized migrants, Texas has been deploying concertina wire on its side of the Rio Grande River.

Appearing on “The Valley’s Morning News” on Edinburg’s KURV-AM, Abbott offered his most detailed explanation yet of why he hasn’t invoked war powers by officially declaring an “invasion” and letting state police arrest and deport undocumented immigrants.

“I’m not afraid of a court fight” with the administration of President Joe Biden, the Republican governor insisted.

However, “if you read every study” of plans for states to argue conditions on the border qualify as an invasion, “which I have, there is one thing that’s clear,” he told conservative talk-show host Sergio Sanchez. “It’s one thing to try to implement it and there’s two problems with regard to the implementation.”

“If I make that declaration and tell law enforcement to do it, and law enforcement does do this, they are subject to potential criminal penalties imposed by Merrick Garland, the United States attorney general and the Biden administration, that would be more than happy to arrest and to prosecute a Texas law enforcement official,” he said. “And so we’re looking forward to greater answers about that before we pull that trigger.”

Also, while state police might drive undocumented immigrants back across the Rio Grande, the migrants simply would “go a mile up the river and cross the border there,” he said. “And so it creates a revolving door.”

Abbott, who is seeking a third term in November, has aggressively challenged Biden’s immigration policies over the past 15 months – even committing Texas to building its own border wall and deploying police and National Guard soldiers to make trespassing arrests of migrants.

But the governor’s “Operation Lone Star,” though it’s on track to spend more than $5 billion of state discretionary funds in the current two-year budget cycle, has drawn little respect from immigration hard-liners. 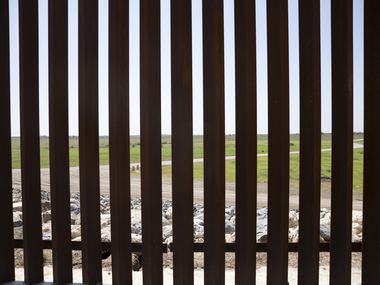 Texas is scrambling to come up with nearly a half-billion dollars to pay the growing tab for its decision to post National Guard soldiers at the southern border. The cost of Gov. Greg Abbott’s border security effort is now on track to exceed $5 billion for the current two-year cycle, up from $800 million last cycle. It includes deploying thousands of state police and Guard soldiers, and building a Texas-Mexico border barrier.

First, in the run-up to the March GOP primary, former Dallas state Sen. Don Huffines, one of Abbott’s challengers, insisted the incumbent was doing too little.

On billboards and in TV spots, Huffines said that if he was elected governor he would invoke Article 1, Section 10 of the U.S. Constitution and declare an invasion has occurred, justifying more state use of force.

The provision is in the section of the Constitution defining Congress’ powers, to include raising armies and declaring war: “No State shall, without the Consent of Congress … engage in War, unless actually invaded, or in such imminent Danger as will not admit of delay.”

Emily Berman, an associate professor of law at the University of Houston, said the theory is based on a constitutional clause that says a state cannot engage in war unless it’s attacked. In the 1990s, several states sued the federal government alleging its failure to enforce immigration law violated the invasion clause. But Berman said courts shot down the cases, ruling the question a political one.

“But they went on to say that when you talk about an invasion, it seemed pretty clear to them they were talking about an invasion by a foreign political entity,” she said, “as opposed to a group of immigrants however large.”

However, Abbott said of the invasion declaration idea, “We haven’t been able to conclude that it is a real solution.”

She also confirmed that Coahuila, a Mexican state that extends from Big Bend National Park down the Rio Grande River nearly to Nuevo Laredo, asked for and is receiving from Texas the razor wire it’s using to repel migrants. Eze did not say how much.

“They are showing a higher level of engagement than ever before,” he told the radio host.