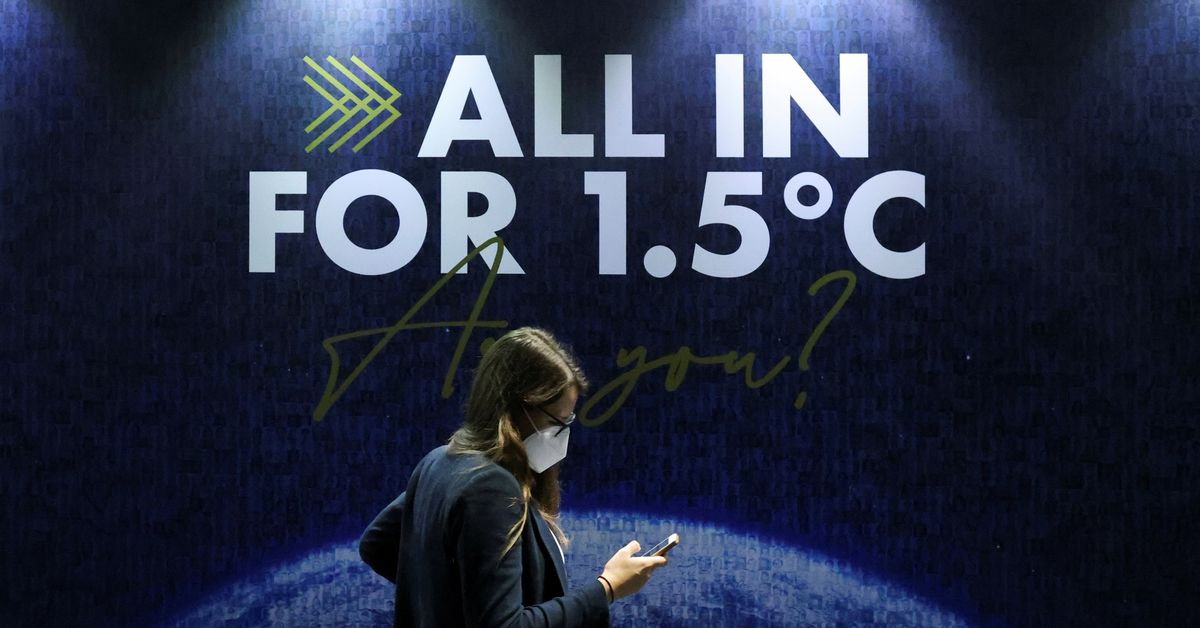 GLASGOW, Nov 12 (Reuters) – A new draft agreement drawn up for the last scheduled day of the U.N. climate conference in Glasgow on Friday presses countries to reach higher in their plans to tackle global warming but also tries to balance the demands of richer and poorer nations.

While retaining a central demand for countries to set tougher climate pledges next year, the draft uses weaker language than a previous one in asking them to phase out subsidies for the fossil fuels that are the prime manmade cause of global warming.

To increase pressure for a strong deal, protesters rallied outside the COP26 venue, where activists had hung ribbons with messages imploring delegates to protect the Earth.

“Action is required from you,” read a note attached to their windscreens. “Go small, Go public transport.”

(Also Read: What to watch on Friday at COP26)

The conference set out with a core aim: to keep alive the 2015 Paris Agreement’s aspirational target to cap global warming at 1.5 degrees Celsius (2.7 Fahrenheit) above pre-industrial levels, and so avoid the worst impacts of climate change.

While there is little hope that new promises to bridge that gap will appear in the final day of talks, negotiators are attempting to set requirements to raise pledges in future, hopefully fast enough to keep the 1.5C goal within reach.

(Also Read: ‘Promises ring hollow’: what they are saying at the climate talks)

The new draft is a balancing act – trying to take in the demands of both climate-vulnerable nations and large economies reliant on fossil fuels.

The retention of a pledge for countries to upgrade their climate targets in 2022 will be welcomed by poorer nations that want more action to tackle worsening floods and wildfires and rising sea levels.

But it was couched in weaker language than a previous text and failed to offer the rolling annual review that some developing countries have pushed for, but Washington in particular opposed.

Countries are currently required to revisit – and preferably raise – their pledges every five years.

A delegate walks past a sign during the UN Climate Change Conference (COP26) in Glasgow, Scotland, Britain, November 11, 2021. REUTERS/Yves Herman

The document also spelled out that scientists say the world must cut the carbon dioxide emissions produced by burning oil, gas and coal by 45% from 2010 levels by 2030, and to net zero by 2050, to hit the 1.5C target.

This would in effect set the benchmark that future climate pledges will be measured against.

“This is a stronger and more balanced text than what we had two days ago,” Helen Mountford of the World Resources Institute said.

“We need to see what stands, what holds and how it looks in the end – but at the moment it’s looking in a positive direction.”

Vanessa Perez-Cirera of the environmental campaign group bemoaned the weakening of pledges to phase out fossil fuels, but was pleased that they still figured in the text.

She said the call for new climate pledges by 2022 “must be matched with short-term action, for example, by agreeing to phase out the trillions being spent on subsidising fossil fuels annually”.

Greenpeace executive director Jennifer Morgan said it was crucial to reinforce the language on phasing out subsidies: “It’s going to be a big fight, but it’s a fight that we have to win.”

After nearly two weeks of talks, the delegations also remain at odds on a range of other issues, and more and more delegates are suggesting the conference could overrun into the weekend.

Questions of finance loom large, with developing countries pushing for tougher rules to ensure that rich countries, whose historical emissions are largely responsible for heating up the planet, offer more cash to help the poorest adapt to climate impacts.

So far, rich countries have failed to meet the goal of $100 billion a year in climate finance that they set in 2009.

The new draft said that, from 2025, rich countries should double the funding they set aside to help poor countries adapt to climate impacts – a step forward from the previous draft, which did not set a date or a baseline.

Ministers are also attempting to finish the contentious rules that will put the Paris accord into practice, requiring agreement on long-standing disputes over carbon markets and transparency.

“If those rules are weak or introduce loopholes, it can undermine the acceleration and ambition and solidarity that we see in the text,” said Yamide Dagnet of the World Resources Institute.

A final deal will require the unanimous consent of the nearly 200 countries that signed the Paris Agreement.