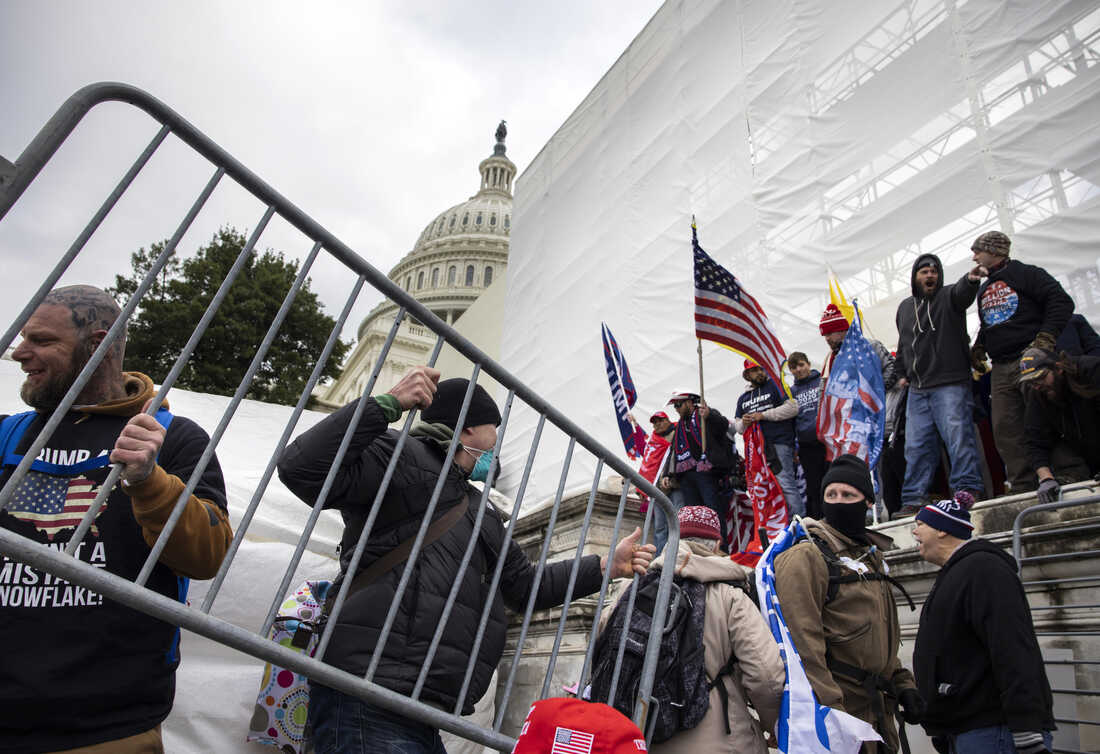 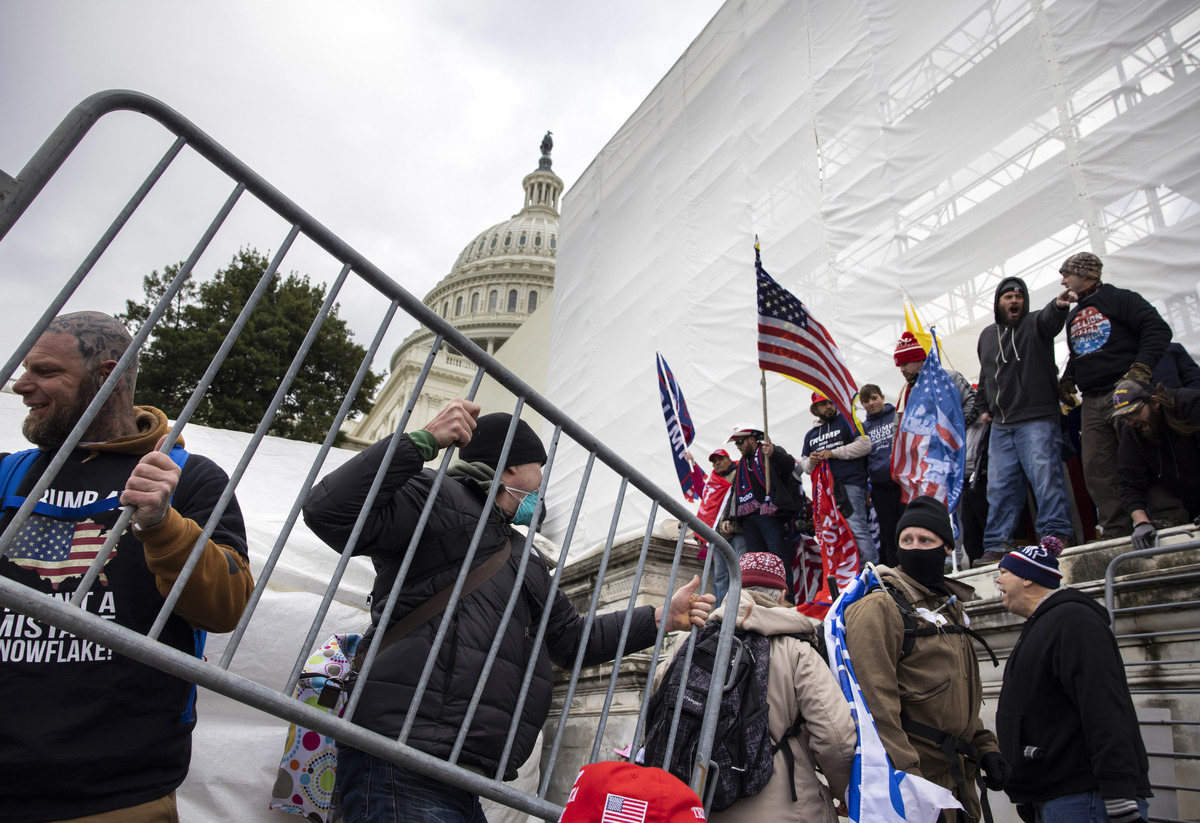 Trump supporters clash with police and security forces as people try to storm the U.S. Capitol on Jan. 6, 2021.

A year after the attack on Capitol on Jan. 6 some lawmakers still can’t believe that Congress itself came under siege.

“More and more it becomes surreal. You become a combination of angry as well as shocked,” Rep. Sheila Jackson Lee, D-Texas, told NPR, standing in Statuary Hall, where rioters stormed through on their way to try to disrupt the electoral count on the House floor.

The insurrection left a mark on lawmakers, staffers, reporters and the Capitol police force, which was overwhelmed by thousands of rioters. Several people died — including police officers who succumbed to their injuries or took their lives in the aftermath. Over 700 people who breached the building have been arrested.

Jackson Lee said it’s become harder to work across the aisle. She added it’s especially challenging when Republicans continue to press false claims about the 2020 election.

“I wish that we had better understanding of each other and we had more common ground for the truth,” Jackson Lee said.

She presided over the House chamber at the conclusion of the electoral vote count at almost 4 a.m., after National Guard troops helped secure the building.

“That’s why we should be celebrating Jan. 6 because we, as members who took at oath to the Constitution, came back and continued our count in the eye of danger.”

Relationships frayed across the aisle

Members and staff say relationships across the aisle have suffered since that day, and it has affected the tenor of the workplace. Democrats say the election of Donald Trump in 2016 and his years in office heightened divisions on Capitol Hill.

“It has certainly accelerated, I think, the polarization and the partisanship and the tension that exists in the House,” he told NPR.

Security fears prompted House Speaker Nancy Pelosi, D-Calif., to install metal detectors to screen members entering the House chamber. Republicans complained they weren’t consulted before they went up and said with the armed security in and around the building metal detectors aren’t needed. But some Democrats said they fear for their safety based on public comments from some GOP lawmakers.

Every time members enter the chamber, it’s a reminder that they don’t trust each other, and it adds to the toxic and polarizing atmosphere in the House.

Freshman Rep Peter Meijer, R-Mich., said the continued use of the magnetometers is “patronizing and it’s a stunt.”

He voted to certify the election results, but 139 House Republicans and eight GOP senators voted to overturn them — hours after the insurrection. Some Democrats now refuse to team up with any Republican who voted against the electoral count.

Pelosi and House Minority Leader Kevin McCarthy, R-Calif., barely speak, and when they do comment on each other it’s usually to deliver a sharply worded barb. McCarthy even publicly began calling Pelosi a “lame duck speaker” as the GOP gains confidence they will regain control of the chamber after the 2022 midterm elections.

Congressman Emanuel Cleaver, D-Mo., told NPR last month that the lack of trust is still a huge issue, and he blames Jan. 6. He’s been a longtime advocate of efforts to promote civility and has focused on ways to do more bipartisan events.

“It makes it far more difficult because I have members in the Democratic caucus who have said to me just outright, ‘I am nervous sitting by this person,’ ” Cleaver said.

Sen. Amy Klobuchar, D-Minn., said she does work with some of the Republicans who supported objections to the count, and she thinks of that every times she sees them.

“I will always remember who the people were who didn’t support the results of the democracy,” she said.

But she also gives credit to those who broke with the former president.

“You get mad, but you still have to acknowledge that there were a number of Republicans who voted to uphold the Electoral College. And I think that’s very important for our country, and that’s why they were there on the inaugural stage.”

In the days after the attack many Republicans, including McCarthy, called out Trump’s role.

“The president bears responsibility for Wednesday’s attack on Congress by mob rioters,” McCarthy said on Jan. 13. “He should have immediately denounced the mob when he saw what was unfolding.”

But as the party’s base has stood by Trump that criticism has faded, and McCarthy opposed a bipartisan bill to create an outside commission to investigate the riot. He boycotted the select committee set up in the House after Pelosi objected to two GOP lawmakers he picked to serve on the panel.

A year later, the vast majority of the GOP’s rank and file are slamming Democratic leaders for security failures on Jan. 6 instead of calling out the former president for inciting a mob. And some Trump loyalists continue to downplay the threat that day, comparing those who illegally entered the building and attacked police to “tourists.” Others in the right wing of the GOP conference have criticized the treatment of those arrested and still being held on charges for assaulting police.

Wyoming Rep. Liz Cheney is a rare Republican who says her party should denounce Trump for failing to tamp things down that day. She is one of two GOP members Pelosi tapped to help investigate Jan. 6. She told ABC’s This Week on Sunday she views that effort as hopeful sign.

“I think that the way that that the select committee is working is nonpartisan, it is very much one that brings together a group of us who have very different policy views, but who come together when the issues have to do with the defense of the Constitution.”

But Cleaver said the divide over Jan. 6 has seeped into events at home, even ones that aren’t political. The former pastor and Kansas City mayor told NPR he was criticized recently by a constituent in his hometown after a Veterans Day event because he mentioned praying for the Capitol police who protected Congress from an attack.

“You cannot even say ‘please pray for police officers,’ ” he said.

In addition to the breakdown of trust, lawmakers are facing an increase in security threats.

Testifying before a Senate panel on Wednesday, U.S. Capitol Police Chief Tom Manger reported that the force has tracked 9,600 threats against members in the last year. That is more than double the amount five years ago.

Lawmakers use money from their office budgets to hire security personnel when they travel back and forth to Washington, and some have a regular police presence with them at events in their districts.