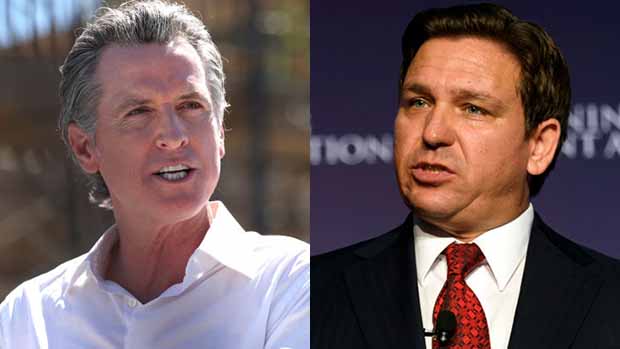 DALLAS (NewsNation) — The feud between California’s Democratic Gov. Gavin Newsom and Florida’s Republican Gov. Ron DeSantis over the U.S.-Mexico border is heating up.

Newsom has challenged DeSantis to a debate after the Florida governor sent nearly 50 Venezuelan migrants to Martha’s Vineyard in Massachusetts last week.

The war of words could be not-so-subtle hints at their future political intentions. Both Newsom and DeSantis are skilled at stirring up their respective parties, particularly, as of late, when it comes to immigration.

“Hey [Gov. Ron DeSantis], clearly you’re struggling, distracted, and busy playing politics with people’s lives,” Newsom said in a tweet. “Since you have only one overriding need — attention — let’s take this up & debate. I’ll bring my hair gel. You bring your hairspray. Name the time before Election Day.”

Election integrity on the ballot this November

Newsom and DeSantis are both running for reelection this year, and DeSantis is considered a top potential presidential candidate for the GOP in 2024. Speculation has also swirled about Newsom running for the Democratic nomination amid doubts that President oe Biden will run for a second term.

The original idea for a debate between the two came from veteran journalist Dan Rather, who has been critical of DeSantis’ move and Republicans in general since the election of former President Donald Trump. Rather said a primetime matchup between the two would be huge for ratings.

As of this writing, the DeSantis camp has yet to respond and no such debate is planned.