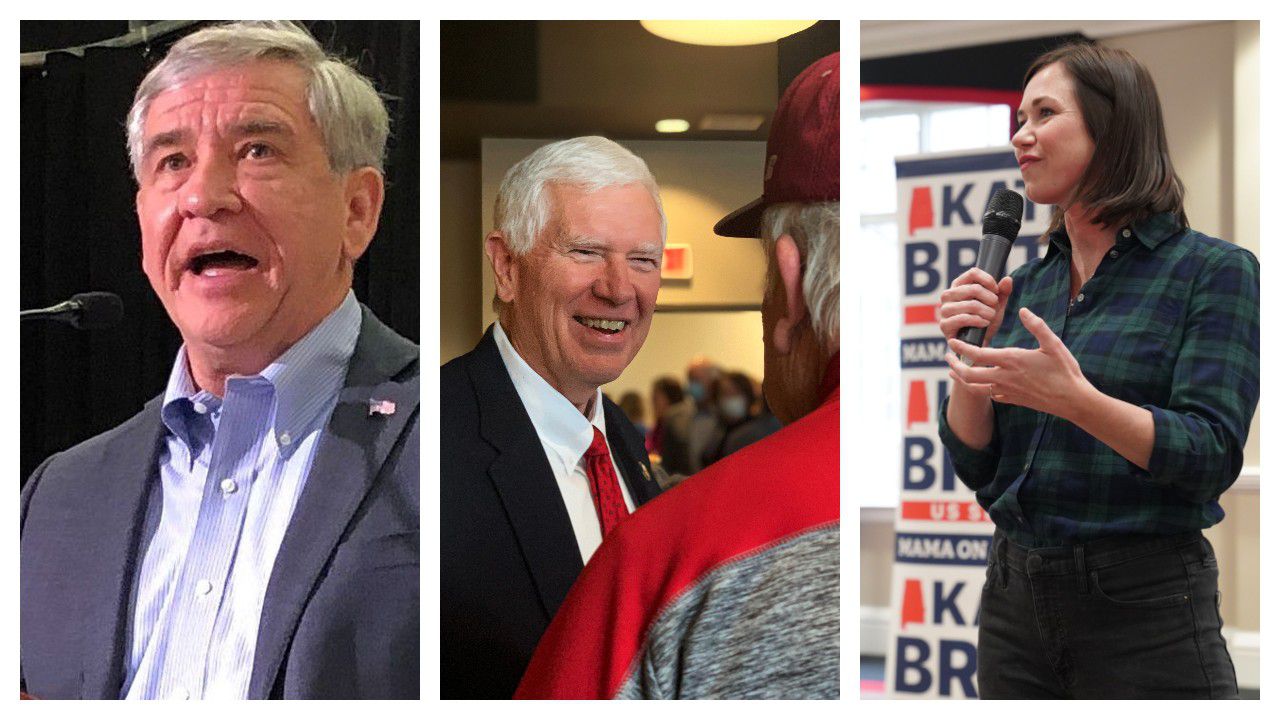 We’ll be providing you with updates throughout the day and night for the Republican and Democratic primaries for governor, U.S. Senate, and other key races across the state.

Polls opened at 7 a.m. and close at 7 p.m. We’ll have the latest on how key races are shaping up as soon as results are available.

Here are all the sample ballots for both Republican and Democratic primaries in all 67 Alabama counties.

Click here for information to help you find your polling place.

Congressman Mo Brooks had a testy exchange with NBC reporter Vaughn Hillyard about his involvement with the Jan. 6 riots at the U.S. Capitol. Brooks, who is running for U.S. Senate, was asked about his claims he wore body armor to address the crowd due to “elements” of Antifa and Black Lives Matter.

“Do you regret stoking, by using those words, by stoking the crowd there that ultimately led to that attack?” Hillyard asked.

“You are distorting my remarks when you say that,” Brooks shot back. “Let’s be real clear. We have had a Barack Obama federal judge who has entered a court order saying there’s no plausible argument that can be advanced that my conduct had anything to do with the attack on the United States Capitol. That ends it. OK?”

The tense exchange continued throughout the interview. You can see more here.

U.S. Senate candidate Mike Durant on possibilities of a runoff.

“It is very likely there will be a runoff. It is very difficult to get 50 percent, plus one with three close candidates competing,” Durant told WAFF. He added if he doesn’t make the runoff, he will endorse Republican Congressman Mo Brooks. Durant and Brooks face former Business Council of Alabama CEO Katie Britt, who is leading in polls heading into the primary.

10:45 a.m. From AP: Four Republicans and one Democrat are on the primary ballot to succeed GOP incumbent John Merrill as Alabama’s top elections officer, secretary of state.

Ed Packard, who worked in the secretary of state’s elections division for nearly 25 years, is seeking the Republican nomination in a field that includes Jim Zeigler, who was barred from running again as state auditor by term limits; state Rep. Wes Allen of Troy, who served nearly a decade as probate judge in Pike County; and Christian Horn, a GOP activist and business owner from Madison County.

None of the four candidates has raised major complaints about election problems in Alabama, which is controlled by Republicans and voted heavily for President Donald Trump in 2020. But all have talked about measures needed to tighten election security, an issue popularized among conservatives by Trump’s false claims that the 2020 election was stolen by President Joe Biden.

10:22 a.m. Lindy Blanchard and Mike Durant have cast their ballots.

10:03 a.m. Mo Brooks spoke to Fox News ahead of today’s primary. ‘“Let me be very clear about what is transpiring. The Democrats and the liberal fake news media, they are racist. They’re the ones who are trying to divide us based on an accident of birth: skin pigmentation,” Brooks said when asked about attempts by Democrats, leftists and liberal media members to tie Republicans to White supremacy,’ the report stated.

9:55 a.m. ICYMI, there are state board of education races on the ballots today.

9 a.m. It could be a rainy primary election day for much of Alabama, Leigh Morgan reports. Isolated severe storms will be possible statewide today. The Storm Prediction Center has expanded a Level 1 risk to cover the entire state in its latest update on Tuesday morning.

8:55 a.m. Columnist Cameron Smith looks at the race for associate justice Place 5 of the Alabama Supreme Court. Former Alabama Republican Party general counsel Greg Cook is facing off against Judge Debra Jones who is now in her second term as circuit judge for Calhoun and Cleburne counties.

8:32 a.m. Details on Amendment 1, from The Associated Press: Voters will decide whether to let the state go into debt for $85 million in bonds to spruce up Alabama’s state parks and historical sites. A statewide constitutional amendment on the ballot would provide $80 million in funding for state park projects that include adding and improving camping sites, adding wireless service, upgrading electrical and water service, replacing playgrounds, constructing swimming pools and repairing parts of Gulf State Park damaged by Hurricane Sally. The remaining $5 million would go to the Alabama Historical Commission for acquiring, renovating and maintaining historical parks around the state. The agency wouldn’t be allowed to use the money at Confederate Memorial Park in Marbury. The park is funded by a tax that was originally intended for needy Confederate veterans.

8:12 a.m. The contest for the Public Service Commission has been a brutal assessment of a government agency that is supposed to serve as an independent regulator of utilities, charged with establishing rates to consumers. Challengers to two incumbent commissioners – Chris “Chip” Beeker and Jeremy Oden – are blasting the group for being beholden to special interests instead of the ratepaying consumers.

8:01 a.m. Another reminder that former President Trump’s influence has played a role in the Senate primary:

7:56 a.m. More from John Sharp on the claim of voter fraud by a candidate for Mobile County D.A.

7:38 a.m. – You will need identification when you vote in today’s primary. You can go here to see a list of accepted IDs. And don’t forget that crossover voting rules apply. That means you can’t vote in one party’s primary and then “cross over” to vote in the other party’s runoff. You can see those guidelines here.

7:28 a.m. This WHNT interview with Mike Durant has been attracting interest on social media. In it, Durant suggests if he loses today it will be due to “misinformation” and if he doesn’t make it to a runoff he will back Mo Brooks.

7:10 a.m. — The prospects of runoffs in Alabama’s two biggest primary contests looms as the biggest storyline for today. The last time Alabama hosted a U.S. Senate and governor’s primary runoff on the same day was in 1978. Another potential first also looms: Katie Britt could be one step closer to becoming the first woman elected to the U.S. Senate from Alabama.

7:07 a.m. — In case you missed it, reporter Sarah Whites-Koditschek asked Katie Britt, Mo Brooks and Mike Durant about their stances on guns, immigration, and abortion.

7:01 a.m. — More from reporter John Sharp on a claim of “voter fraud” made by Keith Blackwood, a Republican candidate for the open Mobile County District Attorney seat.