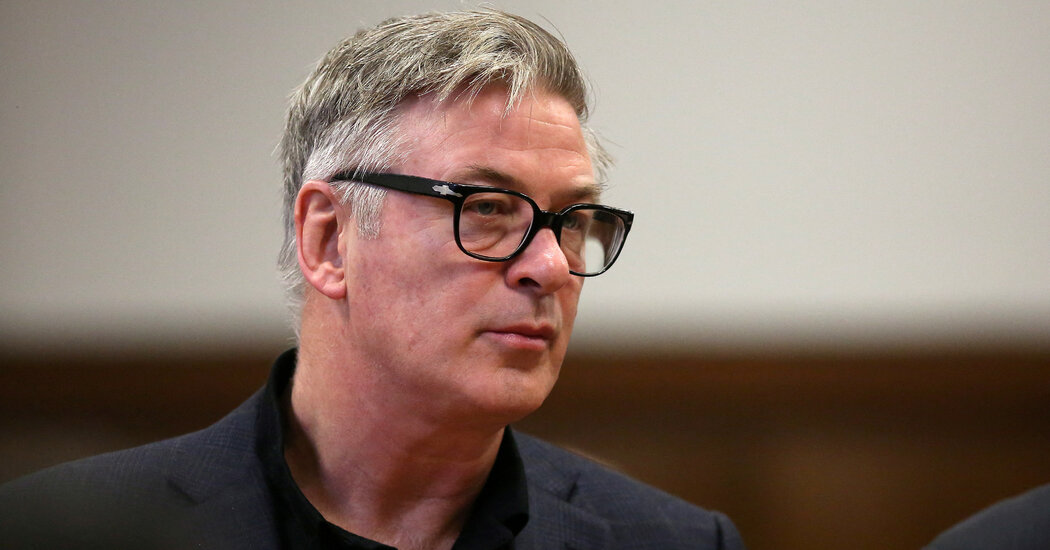 For more than a year, the actor Alec Baldwin has tried to defend himself against the suggestion that he bore responsibility for the fatal shooting of a cinematographer on the set of “Rust,” a low-budget Western he was filming on the outskirts of Santa Fe, N.M.

He spoke to detectives and told them he had been assured the gun he was rehearsing with that day did not contain live ammunition, sat down for an extensive television interview, sought indemnification from financial liability in the case and then sued crew members on the film, claiming that they were responsible for handing him a loaded gun.

But on Thursday prosecutors said that they would charge him with two counts of involuntary manslaughter in the killing of the cinematographer, Halyna Hutchins, 42, saying they believed he had a duty to ensure the revolver was safe to handle.

“We’re trying to definitely make it clear that everybody’s equal under the law, including A-list actors like Alec Baldwin,” Andrea Reeb, a special prosecutor appointed by Santa Fe County’s district attorney to help handle the case, said in an interview. “And we also want to make sure that the safety of the film industry is addressed and things like this don’t happen again.”

The film’s armorer, Hannah Gutierrez-Reed, who loaded the gun that day and was responsible for guns on the set, will also be charged with two counts of involuntary manslaughter. The film’s first assistant director, Dave Halls, who handed Mr. Baldwin the gun, agreed to a plea deal on a charge of negligent use of a deadly weapon.

The criminal charges Mr. Baldwin now faces came as a surprise to many in the film industry and were strongly disputed by his legal team. A lawyer for Mr. Baldwin, Luke Nikas, said the prosecutors’ decision “distorts Halyna Hutchins’s tragic death and represents a terrible miscarriage of justice.”

“Mr. Baldwin had no reason to believe there was a live bullet in the gun — or anywhere on the movie set,” Mr. Nikas said in a statement on Thursday. “He relied on the professionals with whom he worked, who assured him the gun did not have live rounds. We will fight these charges, and we will win.”

Mr. Baldwin, 64, has been a household name for decades as a Hollywood leading man, a TV star who played Jack Donaghy in “30 Rock” and former President Donald J. Trump on “Saturday Night Live,” a co-host of the Oscars and the voice of the New York Philharmonic’s radio broadcasts.

And he has long drawn scrutiny for his offscreen behavior, which have included run-ins with paparazzi, an arrest for riding his bicycle the wrong way on Fifth Avenue, a 2018 arrest over a parking space dispute and feuds waged on social media.

But he has never faced a crisis like the one he faces now.

Ever since the shooting Mr. Baldwin had sought to strike a delicate balance: publicly maintaining his innocence in an effort to preserve his reputation and career while trying to stay out of legal jeopardy.

He appeared on national television, where he said that he had been told the gun he was using that day did not have live rounds in it, and added that he was only following directions when he pointed it at the cinematographer. “Someone is ​responsible for what happened, and I can’t say who that is, but I know it’s not me,” he said in the interview.

Privately, a police report said, he had lamented to a detective who was investigating the case that fall that “if your name becomes associated with something, nobody wants to work with you anymore — nobody.”

If a jury found Mr. Baldwin or Ms. Gutierrez-Reed guilty, it would choose between the two manslaughter charges. The more serious one includes a firearm enhancement and a mandatory five-year sentence; the other charge carries a sentence of up to 18 months.

The criminal charges against Mr. Baldwin are sure to reopen questions about safety on film sets, and who bears responsibility. The district attorney for Santa Fe County, Mary Carmack-Altwies, said in an interview that Mr. Baldwin had a duty to ensure the gun and the ammunition were properly checked and that he should never have pointed it at anyone. “You should not point a gun at someone that you’re not willing to shoot,” she said in an interview. “That goes to basic safety standards.”

Ms. Gutierrez-Reed, the armorer who was responsible for the weapons on set and loaded the gun that day, told investigators after the shooting that she had checked the gun and all six cartridges she loaded in Mr. Baldwin’s gun that day, but she also remarked to investigators, “I wish I would’ve checked it more.”

One of her lawyers, Jason Bowles, said his client was not responsible for involuntary manslaughter, calling the investigation into the case “flawed.”

After the charging decision was announced, some veteran armorers questioned whether the prosecutors’ basis for the criminal charges against Mr. Baldwin was an accurate depiction of the film industry. Larry Zanoff, an armorer who has worked on movies such as “Django Unchained,” said the industry’s go-to safety bulletin does not say the onus was on the actors to ensure a gun was safe to handle.

“The responsibility is on the armorer and the prop master,” Mr. Zanoff said.

The shooting on Oct. 21, 2021, which also wounded the film’s director, Joel Souza, took place in a small set meant to look like a church.

The film’s first assistant director, Mr. Halls, 63, who had taken the revolver from a gray, two-tiered tray set up outside the church by Ms. Gutierrez-Reed, and handed it to Mr. Baldwin, calling out, “cold gun,” indicating that it did not contain live ammunition, according to court papers. He agreed to a plea deal, admitting there was sufficient evidence to convict him of negligent use of a deadly weapon.

A lawyer for Mr. Halls, Lisa Torraco, said in a statement that “he can now put this matter behind him and allow the focus of this tragedy to be on the shooting victims, their family and changing the industry so this type of accident will never happen again.”

The prosecutors said they had determined it was part of film industry standards for actors to ensure that the guns they used on set were safe for them to handle, saying they had interviewed several actors who spoke to the importance of those protocols. Mr. Baldwin has pushed back on that idea in the past, saying that in his experience on film sets it was not the practice for actors to check their own guns.

Ms. Reeb, the special prosecutor, who is also a Republican member of the New Mexico legislature, said Ms. Gutierrez-Reed was also responsible for ensuring that the guns on the set did not contain live rounds, saying in an interview that she should have taken each round out of the gun and shaken them in front of the actor — a practice that helps confirm the rounds are dummies, inert cartridges used to resemble real ammunition in a film.

In the aftermath of the shooting, the authorities found five additional live rounds on the set, including on top of the cart where props were kept and in a belt that Mr. Baldwin was wearing as a costume piece. The investigation by the Santa Fe County Sheriff’s Office did not answer a key question of the case: how live ammunition ended up on a movie set.

Ms. Reeb, the special prosecutor, said that aspect of the case was still unclear. “We may never answer that question,” she said.

The tragedy has resulted in several lawsuits, including from crew members who have accused the production of not properly adhering to safety protocols.

During interviews with the sheriff’s office, some crew members described a lack of consistent meetings devoted to on-set safety. The night before the shooting, most of the camera crew had quit over complaints about overnight lodging and other concerns; in an email to other people on set informing them he was leaving, Lane Luper, the head of the camera department, wrote that the filming of gunfight scenes was played “very fast and loose,” citing two accidental weapons discharges.

A lawyer for Ms. Gutierrez-Reed, 25, who trained on film sets with her father, a veteran Hollywood armorer named Thell Reed, had previously said she filled two roles on the “Rust” set — as armorer and props assistant — which made it difficult for her to focus fully on her job as armorer.

Mr. Baldwin has maintained that he is not responsible for the shooting, saying that Ms. Hutchins had been directing him where to point the gun and that he did not pull the trigger before the gun discharged. He told investigators he had pulled the hammer back and let it go in an action that might have set it off.

“I know 1,000 percent I’m not responsible for what happened to her,” Mr. Baldwin told an investigator, Detective Alexandria Hancock, in a phone call following the shooting.

Ms. Carmack-Altwies, a Democrat who was elected in 2020, said an F.B.I. analysis of the gun showed “conclusively” that the trigger had been pulled.

The prosecutors said the people they intended to charge this month would not be arrested but would be expected to appear for a virtual court appearance. A judge in New Mexico will then oversee a preliminary hearing on the charges and determine whether there is probable cause to move forward.

Ms. Gutierrez-Reed has also accused Seth Kenney, the primary supplier of guns and ammunition for the film, of being responsible for the shooting, alleging in a lawsuit against him and his company that the supply he sent to the set had mixed live ammunition in with dummy rounds.

Mr. Kenney has said he checked all of the ammunition he provided to the production to ensure they were not live, saying in a statement that handling the guns and ammunition on set was Ms. Gutierrez-Reed’s responsibility.

Last year, Matthew Hutchins, the widower of Ms. Hutchins, agreed to settle his wrongful death lawsuit against the “Rust” production. Under the agreement, Mr. Hutchins would become an executive producer of “Rust,” which had been set to resume filming this month. It was not immediately clear how the planned charges would affect those plans.

A lawyer for Mr. Hutchins, Brian J. Panish, said in a statement that he agreed with the decision to bring criminal charges.

“It is a comfort to the family that, in New Mexico, no one is above the law,” Mr. Panish said. “We support the charges, will fully cooperate with this prosecution, and fervently hope the justice system works to protect the public and hold accountable those who break the law.”