Dr. Anthony Fauci on Monday sought to clarify remarks he made over the weekend that it was “too soon” for families to consider gathering in person to celebrate Christmas.

Appearing on CNN, Fauci claimed the comments he made on CBS’s “Face the Nation” were “taken completely out of context,” and that he never intended to convey that people couldn’t spend Christmas with their families.

“It is just too soon to tell,” Fauci told CBS anchor Margaret Brennan on Sunday when she asked if people could gather. “We have to concentrate on continuing to get those numbers down and not try to jump ahead by weeks or months and say what we’re going to do at a particular time.”

Fauci, who was heavily criticized for the remarks, told CNN’s Kate Bolduan that people, especially those who are vaccinated against the coronavirus, could plan to have a “good, normal Christmas” with their families.

“I also said something over the weekend that was taken completely out of context. I was asked what could we predict for this winter, for like December and Christmas,” Fauci said. “I said we don’t know because we’ve seen slopes that went down and then came back up.”

He stated that the best way to ensure the country would be in good shape going into the winter would be for more people to get vaccinated, and that it was “absolutely not the case” that people couldn’t spend Christmas with their families.

“I will be spending Christmas with my family. I encourage people, particularly the vaccinated people, who are protected, to have a good, normal Christmas with your family,” Fauci said. “The way all of the other disinformation goes around, you say something talking about a landmark of a time, and it gets misinterpreted that I’m saying you can’t spend family Christmas time, which is nonsense. You can.” 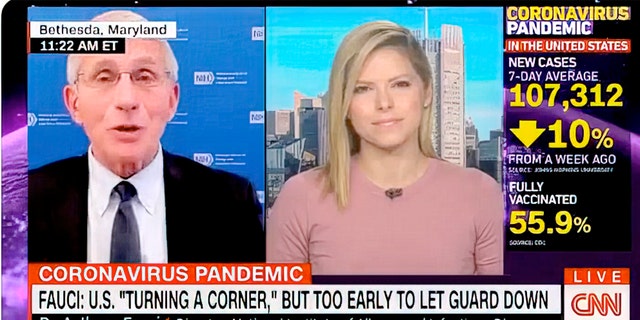 Bolduan attempted to clarify that Fauci actually meant it’s hard to predict the status of things two months out from any given date while in the middle of a pandemic.

“That was, Kate, my absolute point in response to the question that was asked of me. Exactly as you said. I was asked to predict what the state of the pandemic would be when we get to December. And my response was, that’s really dependent on us,” Fauci said.

“It’s difficult to predict, but the one thing we do have within our power to do is to make sure that there are less and less cases, and that diminishing slope that’s going down, continues to go down, and the way we can do that is by getting more and more people vaccinated,” he said. “That was the point that I was making. Not that you’re not going to be able to spend Christmas with your family. I certainly am. That’s for sure.”

The Centers for Disease Control and Prevention (CDC) released updated guidance Monday that advised the safest way possible to celebrate upcoming holidays with friends and family would be either virtually or outside.

“Attending gatherings to celebrate events and holidays increases your risk of getting and spreading COVID-19,” it said. “The safest way to celebrate is virtually, with people who live with you, or outside and at least six feet apart from others.”