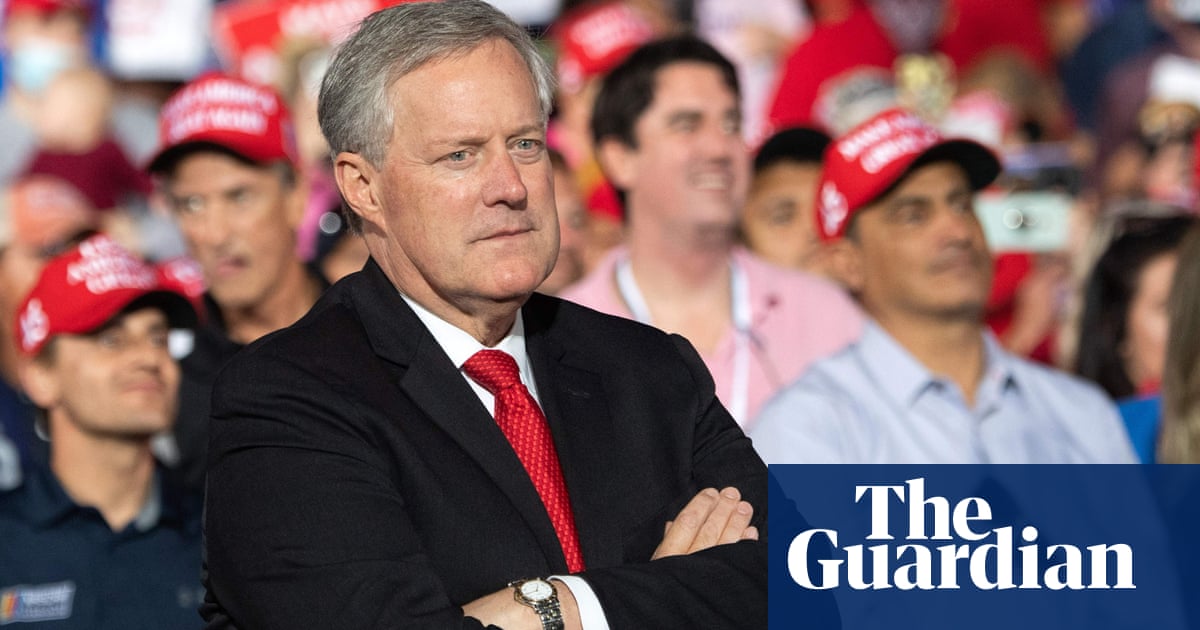 Former Trump White House chief of staff Mark Meadows is facing a criminal referral to the justice department for contempt of Congress should he refuse to appear for an immediate deposition on Friday morning before the House select committee investigating the Capitol attack.

The move to threaten criminal prosecution for Meadows amounts to an abrupt and sharp escalation for the select committee as it seeks to enforce its subpoena against one of Donald Trump’s closest aides first issued in September.

Bennie Thompson, the chairman of the select committee, said in a letter to Meadows’s attorney on Thursday that the panel had exhausted its patience with Meadows, and his failure to appear at the deposition would be viewed as an instance of willful non-compliance.

The chairman said that would force the select committee to “consider invoking contempt of Congress procedures” that could result in a criminal referral to the justice department, as well as the possibility of having a civil action to enforce the subpoena.

But despite the threat of criminal prosecution, Meadows was not expected to attend his deposition, scheduled to take place with select committee counsel in a nondescript House office building on Capitol Hill, according to a source familiar with the matter.

The select committee is targeting Meadows since his role as Trump’s former White House chief of staff means he is likely to hold the key to uncover Trump’s involvement in efforts on 5 January to stop the congressional certification of Joe Biden’s election victory.

The select committee also believes that Meadows remained by Trump’s side for most of 6 January, and was therefore in a unique position to know what the former president was privately thinking and doing at the White House as the deadly attack on the Capitol unfolded.

But after Trump instructed his former aides to defy the subpoenas on grounds of executive privilege, Meadows moved to negotiate with the select committee about the scope of his cooperation – which members on the panel suspect was an effort to stall the inquiry.

Those suspicions among members on the select committee appeared to be bolstered on Thursday after Meadows’s attorney, George Terwilliger, said in a statement that Meadows was “immune” from congressional testimony under justice department opinions.

“Mr Meadows remains under the instructions of former President Trump to respect long-standing principles of executive privilege. It now appears the courts will have to resolve this conflict,” Terwilliger added.

Thompson said in the letter that rejected the notion that Meadows was immune from testifying to the select committee, noting that every federal court has ruled that presidential aides have no such protections in spite of the justice department opinions.

The chairman also noted that Meadows was also yet to produce any materials demanded in his subpoena – including those not covered by executive privilege – though weeks had passed since Terwilliger indicated he would review which records to release.

Thompson said in the letter that his patience had expired and demanded that Meadows appear with the requested documents at a deposition on Friday. Non-compliance by Meadows would force the select committee to pursue contempt proceedings, he added.

The White House on Thursday backed Thompson, notifying Terwilliger in a separate letter that Biden would not assert executive privilege – a power wielded by current presidents – or immunity over the documents and deposition requested by the select committee.

“President Biden has determined that he will not assert immunity to preclude your client from testifying before the select committee,” deputy White House counsel Jonathan Su said in an office of legal counsel letter first reported by the Washington Post.

Thompson’s warning on Thursday was his third threat against a recalcitrant witness since House investigators starting issuing subpoenas to dozens of top former Trump administration officials and pro-Trump activists connected to the 6 January insurrection.

The chairman last week raised the possibility of holding former Trump justice department official Jeffrey Clark in contempt of Congress after he appeared for a deposition pursuant to a subpoena but refused to answer any questions, citing attorney-client privilege.

Last month, the House voted to refer Trump’s former chief strategist Steve Bannon to the justice department for prosecution after the select committee unanimously recommended his referral after he ignored his September subpoena in its entirety.