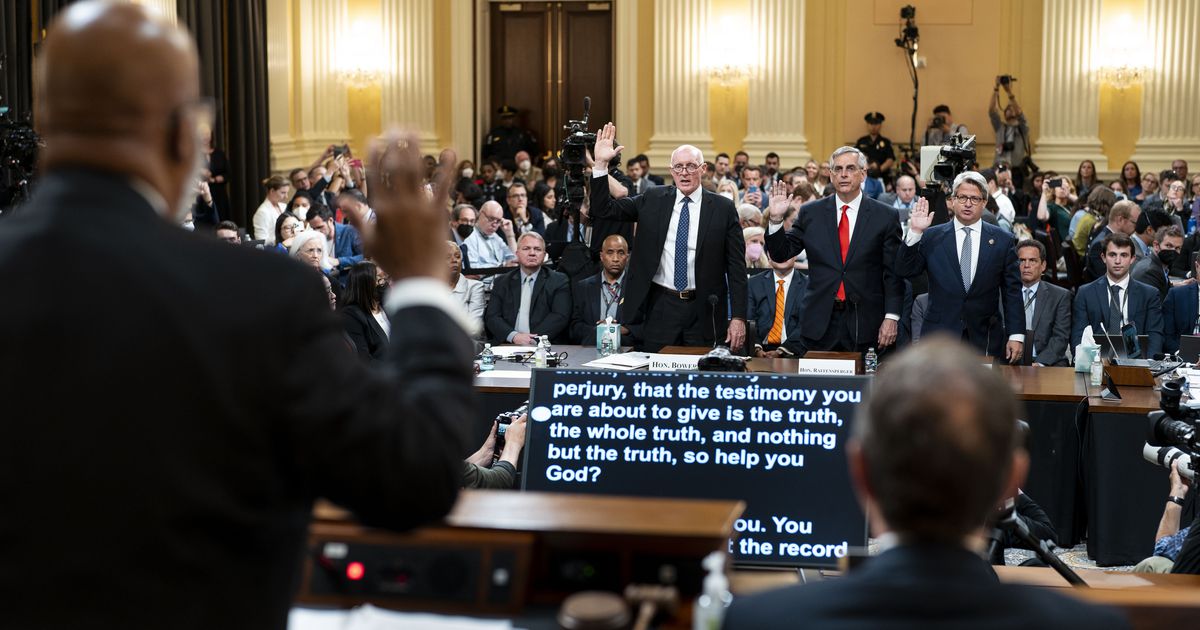 Rusty Bowers, the Republican speaker of the Arizona House, told members of Congress on Tuesday that he refused to participate in a scheme to certify a slate of fake electors for Donald Trump after the 2020 election because of his faith in The Church of Jesus Christ of Latter-day Saints and his reverence for the U.S. Constitution.

The Arizona House speaker’s remarks came during his testimony to the House select committee investigating the Jan. 6 riot at the U.S. Capitol. Bowers was the focus of an intense pressure campaign from Trump in the aftermath of the election.

Bowers gave details about a phone call with Trump and the then-president’s lawyer, Rudy Giuliani, in which they asserted without providing any evidence that the election was marred by fraud. Trump and Giuliani, Bowers testified, asked him to assist in appointing electors for Trump even though Joe Biden won the election in Arizona.

“It is a tenet of my faith that the Constitution is divinely inspired — one of my most basic foundational beliefs. For me to do that because somebody asked me to is foreign to my very being. I will not do it,” Bowers said, at one point fighting back tears.

Bowers, who is a graduate of Brigham Young University, added that he could not violate his oath to the Constitution and remain faithful to his beliefs.

“I do not want to be a winner by cheating. I will not play with laws I swore allegiance to with any contrived desire toward deflection of my deep foundational desire to follow God’s will, as I believe he led my conscience to embrace,” Bowers said, reading a passage from his personal journal.

Arizona Speaker of the House Rusty Bowers, a Republican, appears to choke up when recounting Team Trump’s repeated attempts to get him to toss out Arizona’s electoral votes for Biden. pic.twitter.com/uxeRUHPBmG

Alternate slates of electors were a central part of the plan to derail the certification of Biden’s Electoral College victory put forward by lawyer John Eastman. Had competing electors been introduced Jan. 6, Eastman said, then-Vice President Mike Pence had the power to send the results back to a state or even throw them out. A previous select committee hearing provided evidence that Eastman and Trump knew the alternate elector gambit was illegal.

Bowers said the attempt to come up with those alternate electors reminded him of the novel, “The Gang That Couldn’t Shoot Straight.”

“I just thought this is a tragic parody,” Bowers said.

Asked about meeting to create “fake” slate of electors from Arizona, AZ Houser Speaker Rusty Bowers says, “I thought of the book, ‘The Gang That Couldn’t Shoot Straight.’ I just thought, this is a tragic parody.”

Sen. Mike Lee, R-Utah, also was worried about the Constitution after the 2020 election, but his concerns were different from those verbalized Tuesday by Bowers.

Leaked text messages with former White House chief of staff Mark Meadows suggest Lee was involved in the scheme to persuade lawmakers in battleground states to certify alternate slates of electors in a way that would not run afoul of the election process spelled out in the Constitution.

“I know this will end badly for the president unless we have the Constitution on our side,” Lee texted Meadows on Jan. 3, 2021. “And unless these states submit new slates of Trump electors pursuant to state law, we do not.”

Lee has insisted he was merely investigating “rumors” that states were considering alternate electors. He ultimately voted to confirm Biden’s win.