A former top aide for Atlanta Democratic Mayor Andre Dickens was arrested at Atlanta International Airport after police detained him on charges of terroristic threats issued by authorities in Georgia.

Ali Carter was arrested on Dec. 29 at the Hartsfield-Jackson Atlanta International Airport by officers with the Atlanta Police Department. The responding officers were serving a warrant originally issued by the Douglas County Sheriff’s Department.

“On 12-29-2021 at 2322 hours, Officer Pierre, Officer Mitchell, Officer Mack and I, officer Petreus responded to gate D23, American Airlines, flight #709 in reference to a warrant from Douglas County Sheriffs Department for a Mr. Ali Carter,” a police report provided to Fox News Digital by the Atlanta Police Department reads.

Dickens won a runoff election on Nov. 30 to become Atlanta’s next mayor, riding a surge of support that powered him past City Council President Felicia Moore.

“Upon arriving, we located Mr. Ali Carter on the aircraft, in seat #11F and he confirmed his identity to police by name,” the report, which was written by Officer Lucy Petreus, reads. “Mr. Carter was informed of the warrant and he was transported to the police precinct for paperwork to be completed and to receive confirmation of the warrant.”

A spokesperson for the City of Atlanta told local affiliate Fox 5 Atlanta, “The incident in question is based on a warrant from Douglas County and Mayor Dickens has been made aware of the alleged incident. While Mr. Carter previously worked for Councilmember Dickens, he is not part of the Mayor’s administration and is no longer an employee of the City of Atlanta.”

Fox 5 Atlanta reported that Carter allegedly threatened in September 2020 to use his AR-15 if his ex-wife’s boyfriend touched his child again in a phone call that police say was recorded.

The spokesperson did not clarify Carter’s former job title. However, Carter was previously listed as a “chief of staff” to Dickens when he served as a councilman and Dickens’ “director of constituent services,” according to a 2015 Facebook post.

The Atlanta Police Department released bodycam footage of the arrest Tuesday in which Carter can be heard speaking to the officers. 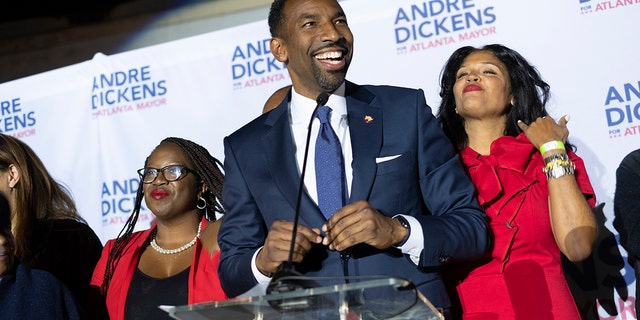 “Do you know who I am?” Carter can be heard asking the officers, who respond by confirming his name.

“OK, well you still have a warrant for your arrest,” the cop recording the arrest responds. “What are we supposed to do?”

“Call the mayor, man,” Carter tells an officer at another point. “I’m chief of staff to our new mayor, man.”

Carter was booked Dec. 30 into the Douglas County Jail and has since been out on bond, Fox 5 Atlanta reported. It appears that Carter was in attendance at Dickens’ inauguration ceremony on Monday, based off a 4-minute video post on his Instagram account.

Dickens has spoken glowingly of his relationship with Carter in the past, writing on Facebook back in 2014, “You guys exceeded my expectations. Keep serving Atlanta! The dream team of Ali Carter, Emil Runge, and yours truly.” 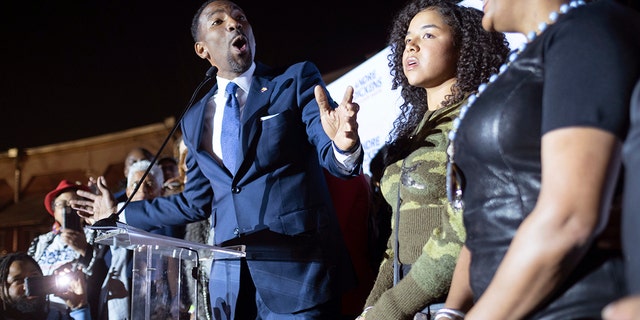 In a 2015 Facebook post, Dickens congratulated his “main man” Carter for his acting role in a feature film. In a 2016 post, Dickens calls Carter a “friend” and “city council staffmember.” In 2018, Dickens refers to Carter as “My friend. My brother. My staff member.”

In October 2021, Carter posted a picture on Facebook of Dickens and him by a podium that had his campaign for mayor sign on it with the caption “Been rocking with @andre4atlanta since 2013 and I am 100% confident in saying that he will make a great Mayor! #choosewisely”

Carter was also tagged in several campaign videos on Facebook from this past fall.

Dickens won a campaign dominated by concern over rising violent crime in the city, arguing he would be more effective than Moore, who had often been a sometimes-lonely critic of previous mayors in her 20 years on the City Council.

Moore had been the leading candidate in the first round of voting on Nov. 2 among 14 candidates in a nonpartisan race. Incumbent Mayor Keisha Lance Bottom didn’t seek a second term.

Fox News Digital contacted Ali Carter and the Atlanta Mayor’s Office for comment but did not receive a response.