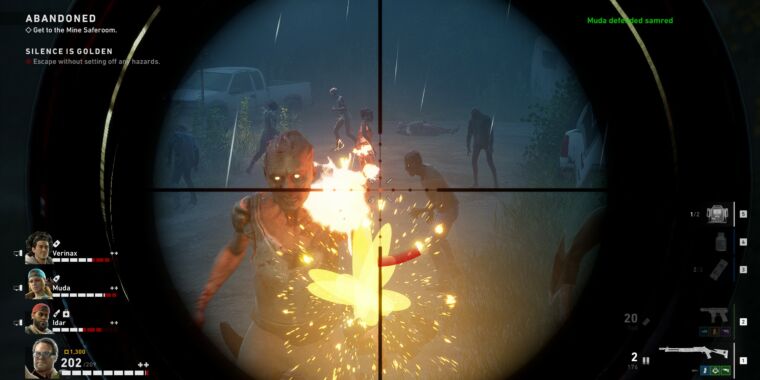 17 with 13 posters participating, including story author

As the new video game Left 4… ahem, Back 4 Blood shambles its way toward launch later this year, this zombie co-op shooter has entered a state that formally counts as a “beta.” I’ve determined this after about six hours playing the game’s latest test version, now live for its preorder customers (or anyone who’s scored early codes). This version will open up to the public on Thursday, August 12. The PvE and PvP modes I’ve tested feel solid and stable, at least on PC, and they make it easier to determine exactly what Back 4 Blood will feel like as a retail game starting October 12.

In short, Back 4 Blood already feels like the Left 4 Dead series learned how to count to three. You don’t have to squint to see the places where the game lacks some Valve-like magic, but it’s not enough to drag down the bloody good times. Back 4 Blood feels like something approaching a worthy sequel, thanks to a ramping up of engine tech, a clever and fair “card deck” system, and surprisingly entertaining tweaks to humans-versus-zombie PvP combat.

Build many decks, kill many zeds

For a primer, rewind to my December 2020 look at the game’s less-polished alpha version, which sets the stage as follows:

Many of B4B‘s concepts are lifted shamelessly from L4D (if the naming convention with a number “4” didn’t clue you in). To wit: each of the game’s “campaign” zones is broken up into smaller levels, and your squad gets an opportunity to rest, heal, and stock up on supplies at a “safe zone” between each level. Use guns, melee weapons, and explosive implements to tear through zombies, and juggle health items and tools to get your team from one safe zone to the next.

That core conceit is still here, while this week’s testing version adds more near-final polish to the experience. The biggest differentiator is a better look at its series of gameplay-modifying card decks, and from what I can tell, Turtle Rock Studios has implemented something that should work without demanding players spend a single additional penny on top of the retail price.

You’ll start the game with a solid inventory of cards, along with an invitation to build 15-card decks. Whenever you dive into either PvE (co-op with friends against computer-controlled zombies) or PvP (a four-on-four versus mode), your first step is to pick one of your custom decks. At the beginning of each campaign phase, some of your cards will be randomly dealt, and you pick one or two of them to augment your battling from there on out.

Most directly benefit your character, with a smaller number of cards giving all teammates some sort of boost. Often, these are simple numerical boosts, ranging from additional health or ammo to special perks that turn on when your character is low on health. Others give your character entirely new attacks or abilities, like a “charged” melee attack that lets you hold the melee button down longer to barrel into zombies.

Each player will choose roughly six cards per session (always in a “deal five, pick one” capacity). This means proper deck-building lets players dial in various gameplay philosophies—without necessarily guaranteeing their dream cards get dealt every time. The earliest deck options in the beta strongly emphasize melee, especially when they stack a health bonus for every zombie killed with a melee weapon. Later card unlocks make it easier to kill from afar, heal and revive allies, or stack up your endurance meter (which runs down when you run or use melee attacks).

As I spent more time playing the beta, I felt genuine excitement in earning the points needed to unlock more deck options. I didn’t want to be a sniper at first, thanks to how much fun I had battling with shotguns and axes, but I grew to long for a deck that would emphasize distance attacks while hand-to-hand duties went to my squadmates. I imagine the beta will expose various math-related tweaks needed for some of the cards, but make no mistake: already, this system adds welcome spice to the dated Left 4 Dead co-op formula. And if publisher WB Games doesn’t screw it up by adding microtransactions to these cards, then we’re in for a good deck-building time.

B4B‘s four-on-four versus mode will look familiar to L4D fans, as it, too, pits teams of “cleaner” humans against teams of super zombies. But where the L4D version could feel overlong and unwieldy, Turtle Rock’s new spin prioritizes quicker, more dynamic combat that’s better built to stave off rage-quitters.

In L4D‘s versus modes, teams of zombies invaded normal campaign maps to interrupt, annoy, and (hopefully) kill the human teams. B4B‘s twist revolves around smaller, versus-specific slices of the campaign’s maps, along with a battle royale-like “safe zone” that moves every 60 seconds. Each team takes turns as the zombies and the humans, one shot at each side per round, and the object is for each team to last longer as humans in a given round.

From what I’ve seen, teams in human mode can last as long as four minutes or as little as 45 seconds per round. Lasting longer as a human team, or ruining the humans’ day as zombies, requires both sides to make wise decisions about map control. In particular, humans can’t rely on hiding in a “safe” corner of a map, as the moving safe zone will usually lead to a poison cloud filling up a formerly useful building or cave. Humans would be wise to maximize any seemingly safe region’s extra ammo, gadgets, and health pickups before they’re covered in poison gas.

Zombies, meanwhile, are seriously overpowered in terms of seeing humans’ outlines on the map at all times. This is arguably a compensation for how slow most super zombies are compared to humans. Thus, a good zombie round will hinge on effective communication and triangulation—as the super zombies do best when they separate human teammates, then take one or two of them down. (Meanwhile, humans, stick together, for god’s sake!)

As a best-of-three mode, B4B‘s versus combat is always in equal reach for both teams until the moment it’s not, as opposed to dragging out obvious team imbalances. Unfortunately, I’m not charmed by the versus mode map design I’ve seen thus far: it’s mostly made up of remixed houses and terrain from the campaign—often with too many easy corner hiding spots for humans to settle into. More verticality and forced movement could go a long way to add legs to this mode, especially since human players can’t expect to use weapon families like sniper rifles in the levels I’ve thus far seen.