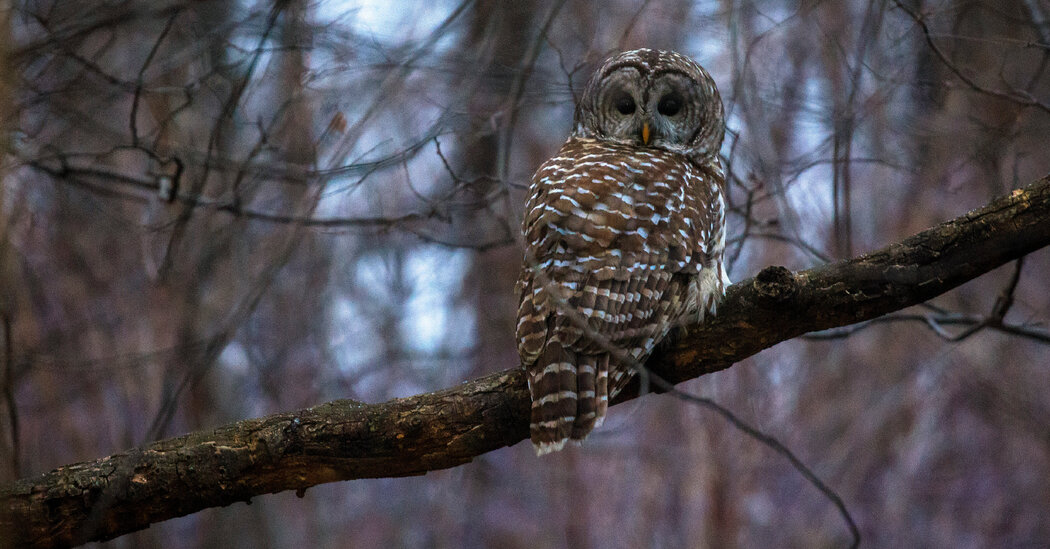 Barry the Barred Owl, whose majestic presence and unusually extroverted demeanor made her a beloved Central Park celebrity, died early Friday in a collision with a Central Park Conservancy maintenance vehicle.

She was most likely just over a year old based on her feather color, according to Robert DeCandido, known as “Birding Bob,” who has guided bird walks in Central Park for more than 25 years. Birding experts had realized in recent months that Barry was female.

Over the last year, as Barry made a home for herself on the branch of a hemlock in Central Park’s Ramble, she developed a cultishly devoted following of birders, photographers, joggers and other New Yorkers who came to depend on her for cheer and comfort during a year of grief for New York City.

Barry died around 2:30 a.m., when she “made contact” with the vehicle of a two-person Central Park Conservancy maintenance crew, the conservancy said on Twitter. The vehicle was driving around the park doing early-morning inspection and cleanup, the conservancy’s chief communications officer, Mary Caraccioli, said.

The owl was most likely flying across Central Park’s West Drive to catch prey, according to the conservancy, and was not in the line of sight of the vehicle driver, who was moving at or below 15 miles per hour, the conservancy said.

“This owl meant so much to so many people,” said Eric Balcanoff, 32, a photographer who started making daily visits to see and photograph Barry last fall. “There’s a lot of us who are devastated today. We always knew she might fly away and start a family, but none of us were prepared for this.”

Mr. Balcanoff’s experience mirrored that of many New Yorkers: Though he hadn’t previously spent much time observing wildlife, he was so drawn to Barry’s charisma that he ended up becoming an avid birder.

“She had such a lovable face and these soulful eyes,” Mr. Balcanoff said.

Barry the Barred Owl was first spotted in the Loch, a tranquil and leafy watercourse toward the park’s northwestern tip, in October 2020. Right away, birders noticed her outgoing personality. As clusters of onlookers gathered, she would boldly swoop down for her prey — small rats, mice, birds and frogs. She wasn’t afraid to perch 10 or even five feet away from her fans.

“We noticed her general lack of wariness about humans,” said David Barrett, who runs the Twitter account Manhattan Bird Alert. “She was quite amenable to the presence of people.”

Dr. DeCandido was one of the first to spot Barry last October. He was leading a group that came upon her in the park’s north end.

He expected her to fly away after a few days and was surprised when she stuck around, he said. As the months wore on, and as quarantine boredom drove New Yorkers to birding in increasing numbers, Barry became a mainstay of Dr. DeCandido’s birding walks. He sometimes played owl calls, had people line up on the path and then watched them react delightedly as Barry swooped down into view.

“She was a real people pleaser,” he said. “There became a cult of Barry.”

She became the longest-staying large owl in known Central Park history and the first large owl to spend a summer there. She followed the famed mandarin duck, or “hot duck,” a celebrity bird who earlier stirred up a frenzy among New York birders, then disappeared.

As the months wore on, local birders were able to gather more data on Barry. Toward the middle of winter, she moved from the Loch to the ramble, where birders were able to get a better view of her hunting. In February, they learned Barry was a female, when she likely began to think about breeding and people first heard her high-pitched hoot, which Mr. Barrett measured using a voice spectrogram.

Local birders also noticed that she was more active during the day than is typical of owls; they suspected that she was unafraid of humans because she was so young.

Owls typically swoop down from their perches at significant speed, so it is fairly common for them to collide with vehicles, according to Dr. DeCandido. But these collisions more frequently occur on roads where cars are moving quickly.

“The chance of this owl contacting this vehicle should be minimal, especially if the vehicle is driving slow,” Dr. DeCandido said.

On Friday afternoon, when the conservancy announced her death, there was an outpouring of memories and mourning from Barry’s social media supporters, and #RipBarry trended on Twitter.

Ms. Caraccioli noted that tragic collisions like the one that killed Barry are rare.

“We were heartbroken, and we knew the community would be too,” she said.