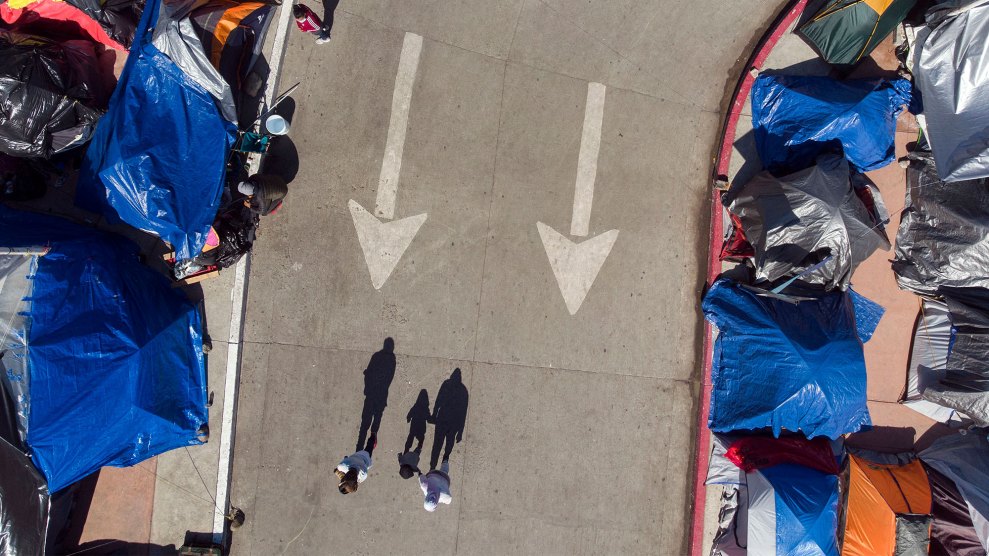 A migrant camp where asylum seekers wait for US authorities to allow them to start their migration process, outside Tijuana, Baja California state, Mexico, on March 17, 2021Guillermo Arias/AFP/Getty

Last month, the Biden administration made a lot of people very angry when it said it planned to restart one of the most high-impact and cruel Trump-era border policies sometime in “mid-November.” But here we are, nearing the middle of the month, and there doesn’t seem to be much, if any, clarity about what the revival of the Migrant Protection Protocols will look like. Many asylum seekers are confused, some migrant aid groups are refusing to work with the administration, and immigration judges don’t have clear guidance on what to expect.

“The lack of clear information is creating confusion and pushing people to risk their lives to try to cross the border in hopes of a chance to request asylum.”

“Asylum seekers at the border want clarity. They want to understand where they should go to request asylum and how the process will work,” says Kennji Kizuka, associate director of research and analysis at the immigrant advocacy organization Human Rights First. “The lack of clear information—and an actual path for asylum seekers to request protection at ports of entry and along the border—is creating confusion and pushing people to risk their lives to try to cross the border in hopes of a chance to request asylum.”

MPP, also known as “Remain in Mexico,” has been called inhumane and illegal by immigrant rights groups and legal experts since it was first implemented back in January 2019. It forced more than 70,000 asylum seekers to wait in Mexico for long periods, leaving them vulnerable to physical violence, sexual assault, and extortion, while their claims were processed north of the border. As I wrote in June, MPP will go down as one of the most significant policies of the Trump era, one that was monumental in shifting how the US handles asylum; the program was designed to wear people down by dragging out the asylum-seeking process to the point that many give up. Biden himself called it “bad policy” when he suspended it his first week in office, saying that “securing our borders does not require us to ignore the humanity of those who seek to cross them.” Back during the 2020 campaign, now first lady Jill Biden filmed an emotional video from one of the migrant camps formed because of MPP, saying “we can’t treat people like this.”

But now, because of a court order, the Biden administration is preparing to put more asylum seekers into this same program. “Reimplementation is not something that the administration has wanted to do. We are doubling down on the affirmation of our decision to terminate MPP. But in the interim, we are under this obligation of the court. And making sure that individuals, when they are returned to Mexico, are treated humanely is of course one of the highest priorities,” an administration official told CBS.

To make the program more “humane”—whatever that means—one would think it would require at the very least good planning and communication. That, though, does not seem to be happening.

Specifically, the Biden administration has said it wants to do things differently by providing lawyers for asylum seekers placed in MPP and resolving their cases within six months. Yet, as judge Mimi Tsanko, president of the National Association of Immigration Judges, tells me, “So far, we haven’t heard anything officially about how the courts will operate this time around. But we know they have a history of being fraught.” (Tsanko, an employee of the Justice Department, spoke with me in her capacity as union president for NAIJ.)

I saw firsthand what a disaster MPP court hearings were in early 2020 when I sat in on multiple proceedings in San Diego’s immigration court. The waiting rooms were packed with families that looked exhausted and confused as guards watched over them, escorting people to courtrooms and restrooms when needed. The group hearings were short and most adults couldn’t follow what was happening. It’s hard to imagine a pandemic-safe way to resume these group hearings and the frequent travel back and forth across the border.

“Our judges must prioritize due process and the obstacles these courts present blink ‘caution red’ at every turn.”

Tsanko says MPP cases were a strain on the already overburdened immigration court system that is backlogged with more than 1 million pending cases. It was concerning, she says, to see how difficult it was for asylum seekers in MPP to access counsel, and it was particularly concerning for “vulnerable respondents.” “Holding proceedings in these circumstances can strain a system that was already stretched very thin even before the pandemic hit,” she says. “Our judges must prioritize due process and the obstacles these courts present blink ‘caution red’ at every turn.”

If the Executive Office for Immigration Review, the Department of Justice branch overseeing immigration courts, has any specific information on how courts near the border would handle new MPP cases, they didn’t share them. In response to my specific question, an EOIR official wrote simply that immigration judges are “prepared to preside over all hearings filed with the immigration courts and will continue to issue decisions that align with the law, including due process.” I also reached out to the Department of Homeland Security for details on the possible reinstatement of the policy; I didn’t get a response.

Beyond the complex world of immigration courts, aid groups that provide critical support for asylum seekers on both sides of the border are also in the dark. Jewish Family Service of San Diego is one of the few legal service providers and migrant aid organizations that have been providing critical assistance to individuals and families impacted by MPP since its inception. As of Tuesday, they also didn’t have any insight into the Biden administration’s pending plans—even though they already engaged in policy work with the White House to ensure a smooth wind-down of MPP. “Never did we think that the plan would be to reinstate this inhumane program,” says Michael Hopkins, the CEO of JFS. “There is no way that MPP can operate safely.”

Last month, more than 70 organizations that help migrants with legal representation signed a letter to the Biden administration saying they “refuse to be complicit in a program that facilitates the rape, torture, death, and family separations of people seeking protection by committing to provide legal services.” The groups added that they are ready to offer legal services to asylum seekers, “were your administration to follow U.S. and international law. But there is no protection in the Migrant Protection Protocols.” Also, dozens of immigrant rights advocates recently did a virtual walkout during a meeting with DHS and White House officials, protesting their plans to bring MPP back and what advocates see as broken promises at the border. The lack of coordination and cooperation from these aid groups would likely have a direct and immediate negative impact on the lives of any asylum seekers placed in MPP.

“Never did we think that the plan would be to reinstate this inhumane program. There is no way that MPP can operate safely.”

With just days left before a possible reinstatement of Remain in Mexico, it’s unclear even how the policy will be implemented and who would be enrolled in the program. Public health rule Title 42 is still being used to turn away almost everyone who comes to the border—notably, without the chance to exercise their legal rights to petition for asylum. After the Trump administration instituted Title 42 in March 2020, there was a monumental drop in MPP cases.

But in a hypothetical post-Title 42 reality, MPP would still create a huge mess. During the Trump era, before being able to walk up to the port of entry to request asylum, people had to put their names on waitlists on the Mexican side of the border, some of which were thousands of numbers long. It could take weeks or months before their number was called, depending on how many people US border officials decided to take on any given day because of a Trump-era policy known as “metering.” But last week DHS ended that policy, directing border agents to “increase capacity to process undocumented non-citizens,” including those seeking asylum, and to stop telling migrants to leave the port and come back at another time. But for the time being, because Title 42 remains in effect, border officials can continue to turn migrants back, saying it’s a matter of public health risk. All this, though, drives home a bigger point: It’s hard to imagine an orderly, let alone “humane,” way to reinstitute MPP.

“At the moment we don’t have any information about how MPP will operate and who it will apply to, if it resumes,” Kizuka tells me. “NGOs at the border and around the country have made clear to the administration that we will not be complicit in re-implementing MPP. The veneer of legal representation cannot and will not protect people placed in MPP from rampant kidnappings and other violence that was and remains an inherent feature of the policy.”

All this MPP murkiness from the Biden administration could, at least in theory, not matter much in the end, as there are forces at play that could end the program once and for all that are outside of Biden’s control. First, a federal judge could still decide to let the Biden administration end MPP, as it wants to do and as DHS Secretary Alejandro Mayorkas has been arguing for in several memos, including one as recently as last month. Or, in another possibility, Mexico’s president, Andrés Manuel López Obrador, could just say he won’t allow MPP to resume. The policy relies on Mexico’s cooperation, as it would have to agree to take back asylum seekers who are not Mexican citizens. Initially, Mexico had called MPP a unilateral move imposed by the Trump administration. Still, it went along taking in non-Mexican asylum seekers after Trump threatened to hit Mexico with tariffs and with border closures. (Mexico did place some exceptions on who it wouldn’t take in, including unaccompanied children and people with disabilities, but as BuzzFeed News has reported, US border officials often ignored these guidelines.) Reuters reported last month that the Mexican government has expressed concerns “around due process, legal certainty, access to legal aid and the safety of migrants”; a senior Mexican official said “there is no decision at this point” about the program’s restart. It’s unclear if anything has changed.

So while we wait to see what happens, the country will also be waiting to see if Biden can in fact deliver on his promises to create a more humane immigration policy broadly, and on MPP specifically. As an administration official told the Washington Post recently, “We’re completely committed to do it in a humane way, and there are so many obvious ways it can be better than last time.” But as Kizuka tells me, “The administration can tinker with MPP all it wants. But at the end of the day nothing can fix a policy that is fundamentally illegal, inhumane, and dangerous.”