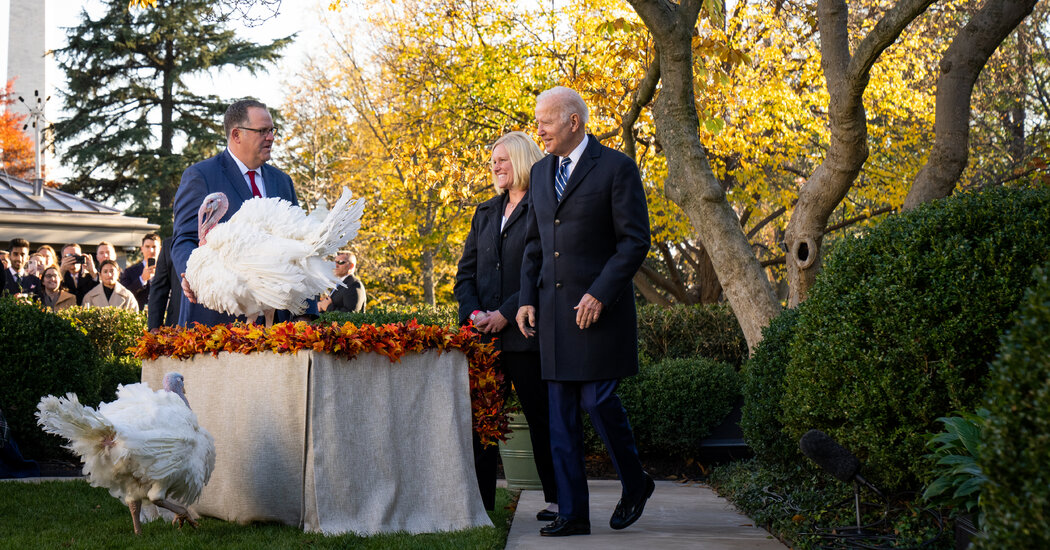 “Turkey is infrastructure,” Mr. Biden said. “Peanut Butter and Jelly are going to help build back the Butterball.”

On Thursday, Peanut Butter and Jelly were unveiled in a ceremony at the Willard InterContinental hotel. The birds pranced about the ritzy hotel as Phil Seger, the chairman of the National Turkey Federation, and Andrea Welp, a turkey grower based near Jasper, Ind., introduced them to the public.

The pair’s training to become the turkeys pardoned by the president included a regimen of listening to loud music in order to master the stress that comes with visiting Washington in 2021, which, for anyone who has been here lately, feels relatable.

Their visit concluded on a happier note than that of some of their predecessors: Earlier presidents, including Truman, tended to eat the birds that were presented to them. The practice of granting freedom to turkeys dates back to the Kennedy era, though President George H.W. Bush was the first to formalize the process and recognize it as an official pardoning. Mr. Biden said that, once pardoned, Peanut Butter and Jelly would convalesce at Purdue University in West Lafayette, Ind.

In recent years, the turkey pardoning tradition, which has been hailed as America’s dumbest, has provided a dissonant backdrop to presidents dealing with political division and an impeachment or two. Indeed, it was only one short year ago that the cornball proceedings suddenly had news value when an open question swirled: Would President Donald J. Trump pardon himself, along with turkeys Corn and Cob? (He didn’t.)

In the year since Corn, Cob and Mr. Trump went free, Mr. Biden has established himself as a different kind of president, running a very different White House, one that tries to be more attuned to the human toll of the coronavirus, and the hole it has ripped in American life.

But for about a half-hour, Mr. Biden, who has allowed himself few ceremonial indulgences as president outside of gunning a Jeep down the White House driveway, basked in the bad puns and dad jokes. And he appeared at ease in a setting where his only concern was speaking over the gobbling heckles of a turkey.

“Folks, as I’ve said before, every American wants the same thing: You want to be able to look the turkey in the eye and tell them that everything is gonna be OK,” Mr. Biden said. “Folks, it’s gonna be OK.”