President Biden responded to the confrontations Democratic Sens. Joe Manchin and Kyrsten Sinema have faced in recent days amid their lack of support for critical items in his agenda, saying he doesn’t think the tactics used against them are “appropriate,” but said it is “part of the process.”

Manchin, D-W.V., and Sinema, D-Ariz., were confronted by activists over the weekend amid a fight to increase the debt ceiling and support Democrats’ $3.5 trillion spending bill.

MANCHIN CONFRONTED BY KAYAKERS IN HIS DC HOUSEBOAT

When asked Monday for a response to the incidents, Biden said: “I don’t think they’re appropriate tactics, but it happens to everybody.”

“The only people it doesn’t happen to are the people who have Secret Service standing around them,” Biden said.

Manchin, who was on his boat over the weekend, was confronted by a group of kayakers.

“We’re working hard, we really are,” Manchin responds to the group. “We’re going to continue to in good faith. I really want to get a good bill that’s a balanced bill, that’s well done. And I know it won’t be enough for some. It will be too much for others in West Virginia.” 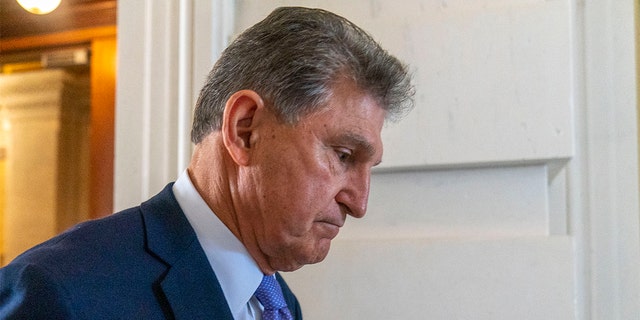 At issue is Manchin’s continued opposition to the size of the $3.5 trillion socialist spending bill championed by his party, which Manchin would like to see cut down to $1.5 trillion.

And Sinema, on Sunday, was confronted in a classroom at Arizona State University outside Phoenix. She was then followed into a bathroom, and filmed as she entered and closed a stall, as they argued she should back Democrats’ spending agenda.

Sinema ignored them as they spoke – the sound of a flushing toilet at one point could be heard as they continued talking.

Sinema’s office released a statement Monday criticizing the behavior of the activists for disrupting her class and bothering her ASU students.

“Yesterday, several individuals disrupted my class at Arizona State University. After deceptively entering a locked, secure building, these individuals filmed and publicly posted videos of my students without their permission — including footage taken of both my students and I using a restroom,” she said.

“In Arizona, we love the First Amendment. We know it is vital to our democracy that constituents can freely petition, protest, or criticize my policy positions and decisions. The activist group that engaged in yesterday’s behavior is one that both my team and I have met with several times since I was elected to the Senate, and I will continue engaging with Arizonans with diverse viewpoints to help inform my work for Arizona.

“Yesterday’s behavior was not legitimate protest. It is unacceptable for activist organizations to instruct their members to jeopardize themselves by engaging in unlawful activities such as gaining entry to closed university buildings, disrupting learning environments, and filming students in a restroom.

“In the 19 years I have been teaching at ASU, I have been committed to creating a safe and intellectually challenging environment for my students. Yesterday, that environment was breached. My students were unfairly and unlawfully victimized. This is wholly inappropriate.

“It is the duty of elected leaders to avoid fostering an environment in which honestly-held policy disagreements serve as the basis for vitriol — raising the temperature in political rhetoric and creating a permission structure for unacceptable behavior.”