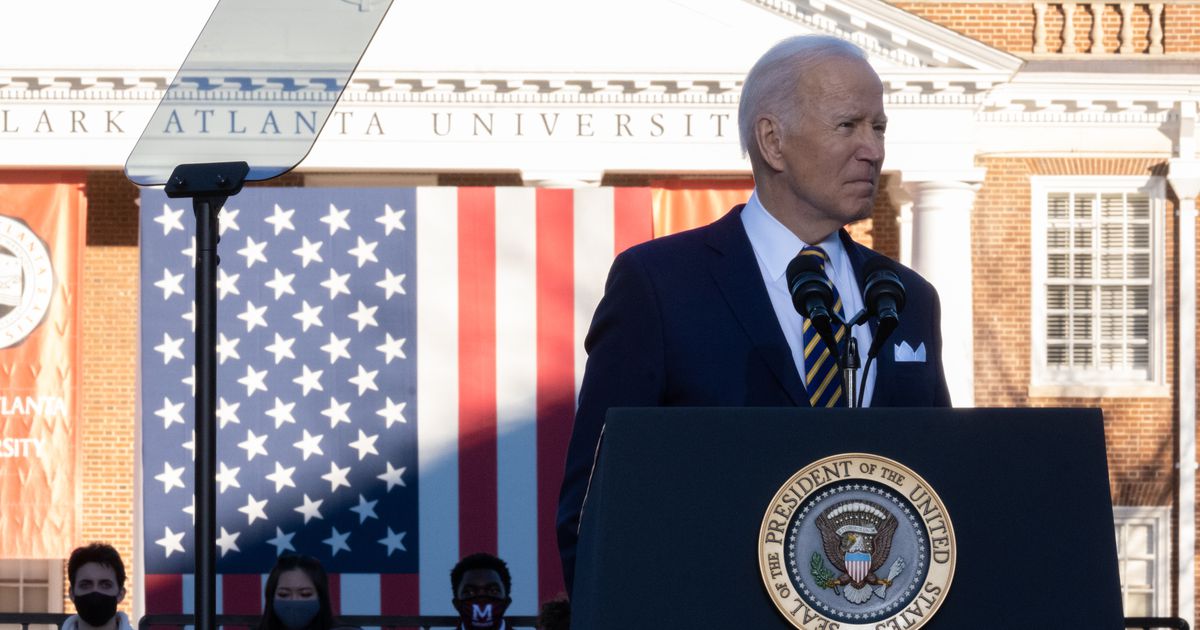 Biden is expected to celebrate what he was able to achieve during his first two years in office when Democrats controlled the White House and both the U.S. House and Senate. His administration is now focused on implementing those laws that are intended to boost spending on infrastructure, domestic manufacturing and green energy while also addressing health care costs and affordable housing.

But the speech — which falls on what would have been King’s 94th birthday — will also reflect the president’s continued focus on voting rights and strengthening American democracy, two issues that have become recurring themes of his presidency but have gained little traction in a divided Congress.

White House adviser and former Atlanta Mayor Keisha Lance Bottoms has been assisting Biden with writing the remarks and told reporters on Friday that he will address that inaction head on.

“You can’t come to Atlanta and not acknowledge the role that the civil rights movement and Dr. King played in where we are in the history of our country,” she said. “But we still have to push forward; we still have more work to do.”

The trip comes just over a year after Biden and Vice President Kamala Harris delivered speeches on voting rights and election reform from the Atlanta University Center, a consortium of historically Black colleges.

U.S. Rep. Nikema Williams, who also serves as chairwoman of the Democratic Party of Georgia, said Biden can build upon those themes in this return.

“We’re at a pivotal point in our country, and if you look at the legacy and the work of Dr. King, he both talked about the voting rights and the civil rights, but he was all about income inequality,” said Williams, whose district includes Ebenezer. “What better place and what better legacy to uplift in having this conversation than right in Atlanta in church and the sacred area that Dr. King preached from?”

Biden and Warnock spoke last week as part of preparation for Sunday. Warnock’s election to the Senate has been key to helping Biden carry out his agenda, and his runoff victory in December solidified a true Democratic majority that will make it easier for Biden to continue adding diversity in federal courts.

But Republicans’ gains in the House during the midterms gave the party a slim majority for the next two years, and its far-right members have become more empowered. That means there is very little hope that meaningful legislation will pass through Congress for the remainder of Biden’s term, and using his executive powers to implement policy shifts are likely to be challenged in court, as seen with his student loan forgiveness plan.

That presents another test for the president: how to celebrate what he has accomplished while also acknowledging the difficult path ahead to do more. Some grassroots activists boycotted his voting rights speech last year, saying the words weren’t being accompanied by enough action in Washington.

Gerald Griggs, the president of the Georgia NAACP, plans to be in the audience at Ebenezer on Sunday. Griggs is supportive of Biden but is hoping for a message that outlines how he will further address the needs of the people who put him in office, especially when it comes to voting and police accountability.

King’s father, Martin Luther King Sr., was an executive committee member of Atlanta’s NAACP chapter and the younger King worked closely with the organization throughout his career as an activist and on such events as the March on Washington.

Atlanta came to be known as the “cradle of the civil rights movement” because so many activists and organizers resided in the city and based their organizations in the Sweet Auburn neighborhood that includes Ebenezer.

Atlanta Mayor Andre Dickens said the city is ready to receive money for roads, bridges and affordable housing that has already been signed into law, and that’s something he wants to thank the president for in person.

But he also has a political ask: The mayor continues to lobby the Biden administration to support bringing the Democratic National Convention to the city in 2024. Any moments he gets with the president will include some time talking about that, Dickens said Saturday.

“Atlanta is symbolic of the progress that has been made in the South by the Democratic Party,” the mayor said. “And we are the center of the political universe.”