President Biden is spending his Thanksgiving holiday at a private equity billionaire’s Nantucket home, prompting Republicans to slams him as out of touch as inflation soars.

The Bidens touched down on the Massachusetts island Tuesday night and will spend Thanksgiving at the compound of David Rubenstein, a Carlyle Group co-founder. 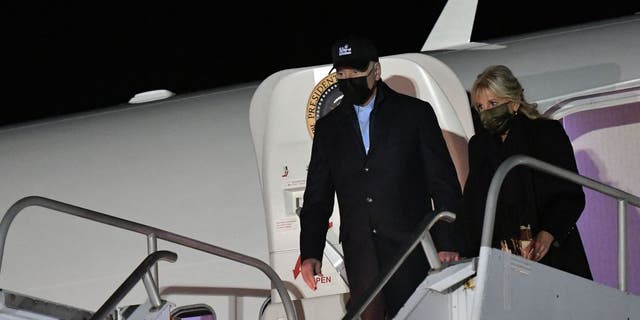 President Biden and first lady Jill Biden step off Air Force One upon arrival at Nantucket Memorial Airport in Nantucket, Massachusetts, on Nov. 23, 2021. (Photo by MANDEL NGAN/AFP via Getty Images)

Spending Thanksgiving in Nantucket is a tradition of the Biden family dating back decades, but it was put on hold last year due to the pandemic. The White House told reporters earlier Tuesday that the Bidens have previously stayed at Rubenstein’s home.

Meanwhile, inflation has hit a three-decade high and the average cost of this year’s classic Thanksgiving feast has jumped more than 14% from last year’s average, according to the American Farm Bureau Federation’s annual Thanksgiving dinner cost survey. That’s in large part because the cost of a turkey is up nearly 24% from last year. The cost of chicken breasts, meanwhile, has jumped 26% over the past year, according to Labor Department data.

The industry has largely blamed the price spike on supply chain disruptions and high demand for food, particularly meat. 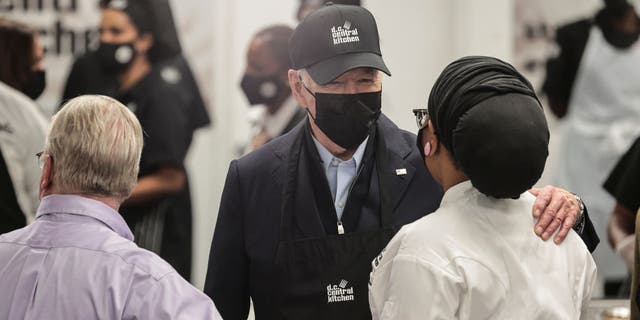 President Biden speaks with a worker before participating in a service project at DC Central Kitchen in Washington, D.C., U.S., on Tuesday, Nov. 23, 2021. (Photographer: Oliver Contreras/Bloomberg via Getty Images)

Fox News reporter Peter Doocy asked White House press secretary Jen Psaki on Tuesday about the message Biden is sending to the middle class by taking time off at a billionaire’s compound during the “most expensive Thanksgiving ever.”

Psaki bizarrely downplayed the price hike on turkeys, saying “a 20-pound turkey is a pretty big turkey” and that they only cost $1 more than last year.

“Not to minimize that – any increase in prices is something the president is concerned about,” she said.

Biden’s trip has sparked criticism on both sides of the political aisle, but conservatives have been the most vocal. The Republican National Committee (RNC) published a blog post slamming the president as an out-of-touch “limousine liberal” who “would make Marie Antoinette proud.”

“As Biden spends Thanksgiving in ritzy Nantucket, food pantries around the country are struggling to serve those most in need because of his rising prices and supply chain crisis,” RNC Chairwoman Ronna McDaniel tweeted.

“Dear President Biden, While you are in Nantucket, enjoying your meals at a billionaire’s compound, here are the prices that Americans are paying for their Thanksgiving dinner—the most expensive one in history,” House Minority Leader Rep. Kevin McCarthy, R-Calif., tweeted.

“As @POTUS hurries off to his Nantucket vacation, he’s leaving American families to struggle with skyrocketing prices and a brutal energy crisis — resulting in the most expensive Thanksgiving in the history of the holiday. A total disaster,” Rep. Greg Murphy, R-N.C., tweeted. 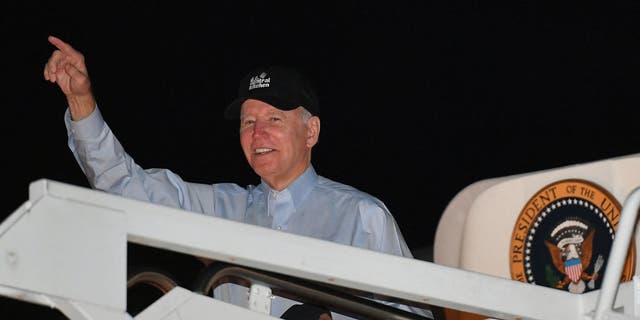 “Joe Biden is enjoying his Thanksgiving at a billionaire’s home in Nantucket,” tweeted Republicans on the House Judiciary Committee. “Regular America? Enjoy the expensive gas and groceries!”

Even journalists took issue with the optics of the Bidens’ visit. Some critics have pointed out that Republican Virginia Gov.-elect Glenn Youngkin, who handed an embarrassing defeat to Democrat Terry McAuliffe earlier this month, used to be co-chief executive of the Carlyle group and stepped down last year before announcing his candidacy.