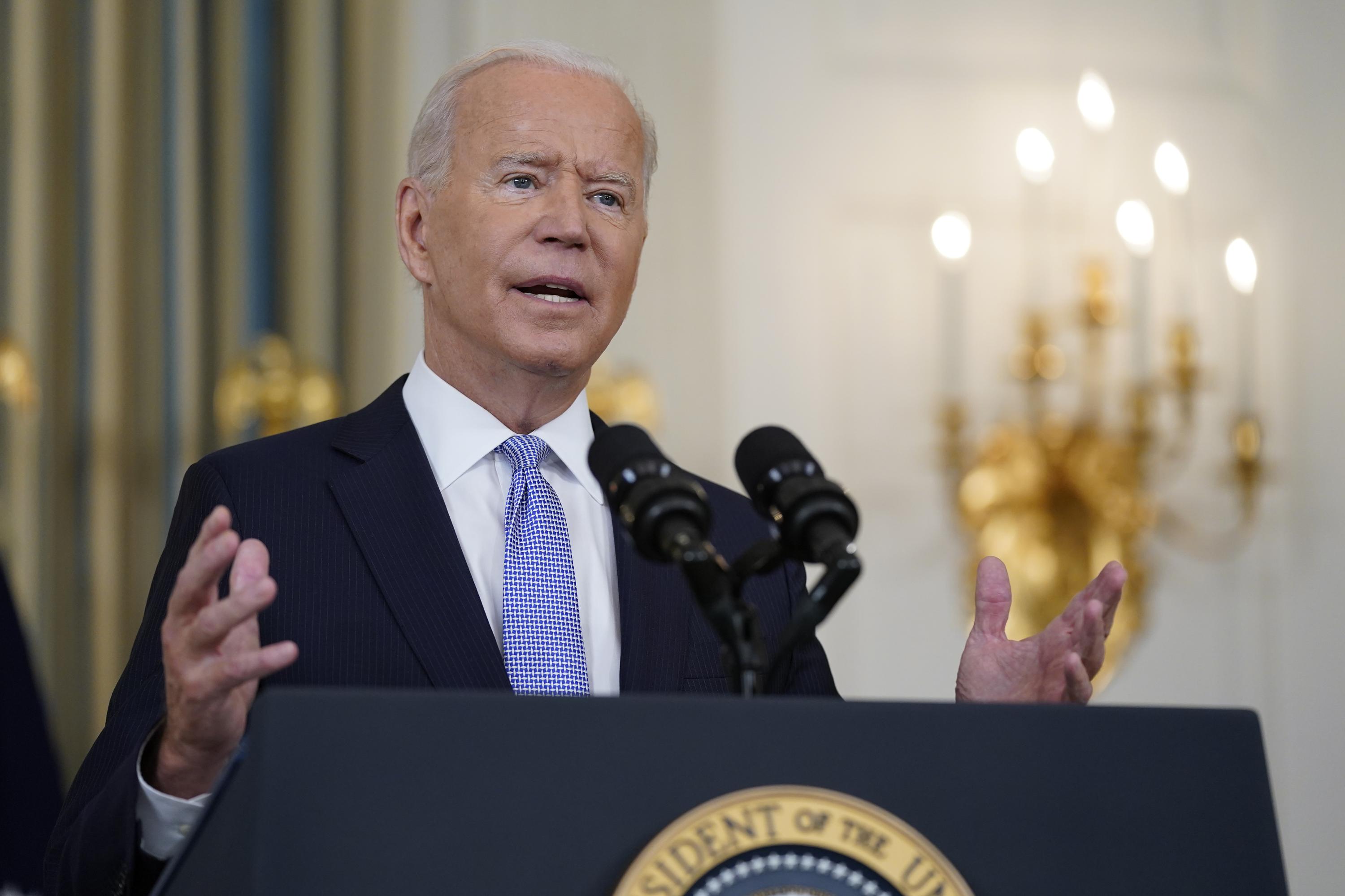 WASHINGTON (AP) — President Joe Biden’s plan for a massive expansion of social programs is being framed by supporters as such a high-stakes endeavor that it’s “too big to fail.” It also may be too big to describe.

That’s a particular challenge as the White House struggles to sell the public on a wide range of initiatives packaged under the imprecise slogan of “Build Back Better.”

A series of crises, from Afghanistan to COVID-19, along with the convoluted legislative process have hampered the White House’s ability to promote the $3.5 trillion package or even say definitively what’s in it. The price tag is sure to shrink and it’s possible that components could change.

The package, now the subject of furious negotiations on Capitol Hill, would fundamentally transform the government’s relationship with its citizens and dramatically expand the social safety net.

It sets out to broaden well-known programs — for example, adding dental vision and hearing aid benefits to Medicare and continuing the Obama-era health law’s temporary subsidies that helped people buy insurance during the pandemic,

But anxiety has risen among congressional Democrats during the negotiations, with some blame placed on Biden. He had planned to spend recent weeks driving support for the legislation but was sidetracked by the tumult in Afghanistan and the surge in coronavirus cases.

Some Democrats worry the president’s pitch on the package doesn’t always click with people looking for a more concrete idea of what’s in it for them.

“This is a case where the parts are greater than the sum: It’s important for people to know what the parts are, they are very popular and would have a very positive impact on people’s life,” said David Axelrod, former senior adviser to President Barack Obama. “But it’s become a battle over price tag and that’s unappealing. That’s the battlefield where Republicans want Democrats to fight.”

Polling suggests that elements in the bill such as child care and infrastructure are popular with large parts of the public. But advocates worry the voters don’t know that those things are in the plan.

“‘Building Back Better’ doesn’t say to people what we are building back — at least when you talk about bridges, people have an idea,” said Robert Blendon, a longtime public opinion analyst at the Harvard T.H. Chan School of Public Health. “It’s the price you pay when you are not dealing with a single issue. … ‘Building Back’ is the slogan, but there’s just no evidence that the public grasps what is in this bill.”

The need for a reset was so clear that the West Wing decided that White House press secretary Jen Psaki would begin her Monday briefing by delivering a detailed rundown of just what’s in the bill. That’s according to two of the more than a half-dozen White House aides and Democrats close to the West Wing who were interviewed for this story but spoke on condition of anonymity because they were not authorized to publicly discuss private conversations.

Psaki began the briefing by stating: “I wanted to take the opportunity just to remind everyone, specifically in the public, of what we’re talking about in these packages and why the president is fighting so hard to get his agenda forward.”

Then she went through elements of the package, including plans to address climate change, lower education costs and promote access to child care.

White House aides say this is not the right time for Biden to be barnstorming to promote his agenda. They note that key Democratic Sens. Kyrsten Sinema of Arizona and Joe Manchin of West Virginia are not generally responsive to national political pressure — and certainly not to presidential demands.

Aides believe it’s a better for Biden to talk through exactly what will be necessary to get those two Democrats on board. The president canceled plans for a Wednesday visit to Chicago to promote vaccinations so that he could remain in Washington as negotiations reach a critical stage.

The Biden administration has found itself constantly pulled off its intended message of a nation rebounding to new heights. Initial signs of an economic boom from the $1.9 trillion coronavirus relief package ran headfirst into a shortage of computer chips and other goods that have caused higher inflation, a persistent problem that was largely unforeseen by Biden’s team, according to one administration official.

Some Democrats are pushing back on the hand-wringing over how to sell the big bill, believing the details should not come as much of a surprise.

Beyond the new programs, the package is made up of long-standing Democratic priorities on health care, education and climate change on which many lawmakers have campaigned.

“This agenda is not some fringe wish list: It is the president’s agenda, the Democratic agenda, and what we all promised voters when they delivered us the House, Senate, and White House,” Washington Rep. Pramila Jayapal, the chair of the Congressional Progressive Caucus, said in a statement.

That hasn’t satisfied some Democratic allies.

For example, $10 billion for high-speed rail was shifted from a $1 trillion bipartisan infrastructure bill into the larger package of spending initiatives. Andy Kunz, president and CEO of the U.S. High Speed Rail Association, urged Biden and Transportation Secretary Pete Buttigieg to more forcefully sell it “If they were talking about it more, that would definitely help in letting the American people know what’s at stake here,” he said.

With hurricanes, floods and wildfires dominating local news most of the summer, the machinations in Washington have not broken through to where people are actually following the debate.

“The top concern about messaging is that it’s not getting far and wide enough,” said Margarida Jorge, campaign director for Lower Drug Prices Now, a coalition backing a component of Biden’s bill, authority for Medicare to negotiate prescription drug prices.

“Mostly people in the states have not been reading about the content of the bill,” Jorge said. “If they’re reading anything at all it’s about the size.”