Bjarke Ingels Group has collaborated with NASA and ICON to create Mars Dune Alpha, a 3D-printed research habitat that will provide long duration habitation for astronauts on missions to Mars. The 1,700 sq.ft. structure, which is currently located at the Johnson Space Center in Houston, Texas, is designed by the award-winning architecture firm, 3D printed by construction developers ICON, and will soon be home to NASA’s future crew. 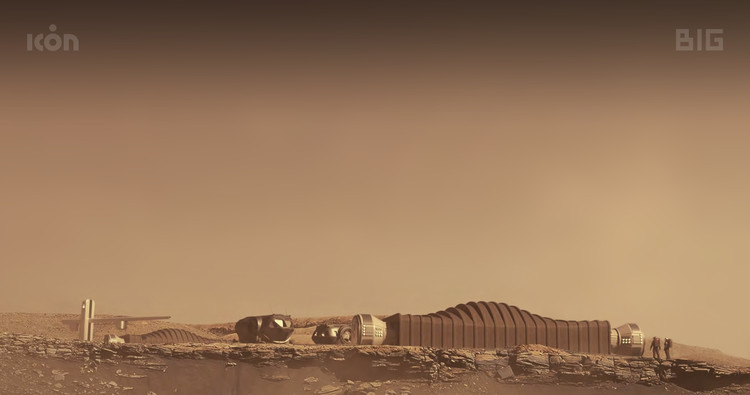 The project is a ground-breaking step closer to realizing habitation and civilization on Mars. The structure is designed with a “gradient of privacy”, with four private crew quarters on one end, and dedicated workstations, medical stations, and food-growing stations on the other, with shared living space in between. Ceiling heights are vertically divided by an arched shell structure to frame each unit. To avoid having a monotonous environment, modular and movable furniture pieces are installed, along with customizable lighting, sound, and temperature, giving the astronauts total freedom to organize their space as they please.

This is the highest-fidelity simulated habitat ever constructed by humans. Mars Dune Alpha is intended to serve a very specific purpose–to prepare humans to live on another planet. We wanted to develop the most faithful analog possible to aid in humanity’s dream to expand into the stars. 3D printing the habitat has further illustrated to us that construction-scale 3D printing is an essential part of humanity’s toolkit on Earth and to go to the Moon and Mars to stay. — Jason Ballard, co-founder and CEO, ICON

The Red Planet: Design on Our Race to Mars

Mars Dune Alpha is part of NASA’s Crew Health and Performance Exploration Analog (CHAPEA) program, which provides valuable insights for NASA’s space food system, along with physical and behavioral health and performance analysis for future space missions. Data obtained from CHAPEA will be used by the space agency to evaluate the living conditions and crew’s health throughout their entire mission.

Together with NASA and ICON, we are investigating what humanity’s home on another planet will entail from the human experience. The data gained from this habitat research will directly inform NASA’s standards for long-duration exploration missions, and as such will potentially lay the foundation for a new Martian vernacular. Mars Dune Alpha will take us one step closer to becoming a multiplanetary species. –Bjarke Ingels, Founder and Creative Director, BIG-Bjarke Ingels Group.

NASA has already begun its recruitment for the long-duration Mars mission analog study inside the 3D-printed habitat, which will commence in Fall 2022. In addition to the Mars Dune Alpha, ICON has also received funding from NASA to launch the “Project Olympus”, the research and development of a space-based construction system to support future exploration and missions on the Moon.

Mars is at the center of this discourse, the most habitable planet in our solar system after Earth. Proposals for the red planet explore how we can create new realms of humanity in outer space. In 2017, a team of engineers, scientists, and designers from the Mohammed bin Rashid Space Center in collaboration with BIG architectural office, developed a project simulates Martian conditions right here on Earth, facilitating research and testing of different building strategies to best withstand Mars’ heat and radiation. The project, aptly named Mars Science City, was built using 3D printing techniques and sand from the Emirati desert.