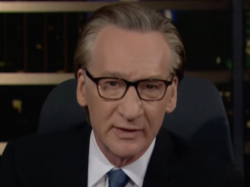 Bill Maher ended Friday’s episode of “Real Time” on HBO by laying out his nightmare scenario in which Donald Trump could return to the White House in 2024 by “figuring out how to pull off the coup he couldn’t pull off last time.”

“He’s like a shark who’s not gone but has quietly gone out to sea. But he’s been eating people this whole time, methodically purging the Republican party of anyone who voted for his impeachment or doesn’t he agree he’s the rightful ruler of the Seven Kingdoms,” Maher cracked about the former president.

“The Ding Dongs, who sacked the Capitol last year? That was like when Al Qaeda tried to take down the World Trade Center the first time with a van,” he also said. “It was a joke. But the next time they came back with planes.”

“I hope I scared the shit out of you,” he said.