A Northern California police officer has been placed on leave over an allegation that he masturbated inside a family’s home where he was dispatched for a disturbance as his department grapples with a series of recent controversies involving its personnel, authorities said.

San Jose Officer Matthew Dominguez, 32, was arrested Thursday on suspicion of misdemeanor indecent exposure for an incident that allegedly occurred on April 21.

Dominguez, a four-year veteran of the force, responded with two other officers to a home for a call about a person with mental illness being violent toward family members. After beginning an investigation, Dominguez sent the other two officers to locate the person. 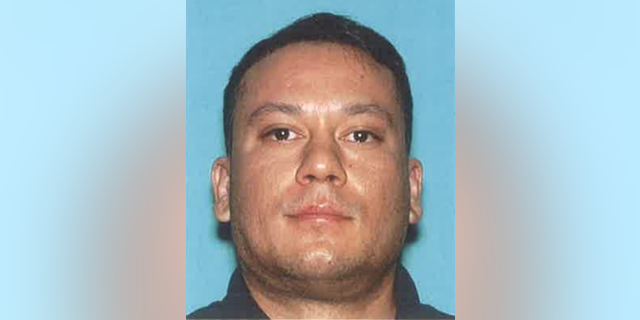 San Jose Police Officer Matthew Dominguez, 32, is accused of exposing and touching himself in front of at least three women inside a home during an April 21 response call  (Santa Clara Office of the District Attorney)

He then touched himself in front of two female family members and exposed himself to the mother, authorities said. The victims fled and reported the incident to two male relatives nearby. One also witnessed Dominguez allegedly exposing himself in the dining area of the home.

“Last week I said that when an Officer violated the public’s trust or engages in criminal conduct I would personally walk that Officer out the door. Today I did it,” he said in a statement.

The arrests came amid a series of controversies that have engulfed the San Jose Police Department in recent weeks.

Another officer has been placed on leave after an allegation he traded a meth pipe with a woman in exchange for information.

The alleged incident has been under investigation since December, San Jose police Sgt. Christian Camarillo told Fox News. He did not reveal the officer’s name or details of the case, saying it was a personnel matter.

On Friday, an off-duty officer was arrested on suspicion of driving under the influence of alcohol before a two-car collision, The Mercury News reported.

Also last week, the Santa Clara County Medical Examiner’s Office confirmed that San Jose Officer De’Jon Packer died from a fentanyl overdose. He was found dead in his Milpitas home on March 13, according to the newspaper.

Another officer is being investigated for allegedly being under the influence of alcohol while on duty and working a case in which a 3-month-old baby was abducted.

The child was found unharmed a day later. On Thursday, Mata said he wants to propose changes to the disciplinary process and that any misconduct could result in termination as quickly as possible as well as criminal prosecution and the decertification of a police officer. .