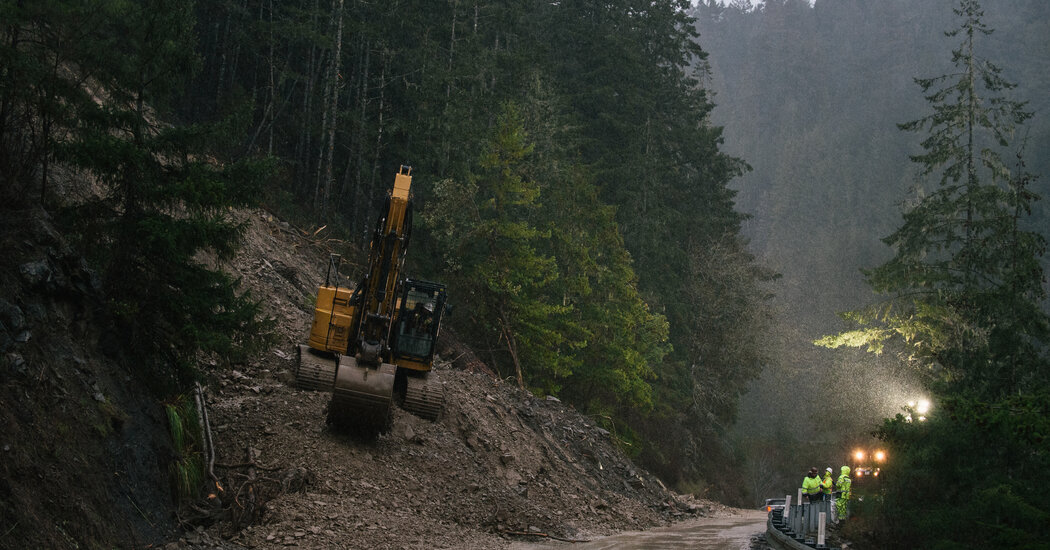 SAN MATEO, Calif. — More than two weeks of storms have already hammered California, and one more arrived over the holiday weekend. The relentless downpours and their impact — flooded homes, flattened cars, downed power lines and more — have killed at least 19 people and disrupted the lives of millions more since late December.

Experts have said that almost none of the storms, on its own, would have been considered catastrophic, but the continual pounding has taken a toll on California’s landscape. Soil now struggling to hold water is more vulnerable to mudslides. Days of strong winds have sent trees tumbling. And the relentless precipitation has turned trickling creeks into raging waterways.

Here is a rundown of a few areas officials are watching closely.

The signature coastal perch of Monterey County, the peninsula about 100 miles south of San Francisco that is home to 50,000 residents, is a world-renowned tourist destination that includes the towns of Carmel, Monterey, Pacific Grove and the golfing destination Pebble Beach.

With storms pounding the Central Coast, the peninsula and the roads that give access to it have been under close watch. Rain will continue on Monday after a stormy Sunday.

Disaster relief workers have seen widespread flooding in the Salinas Valley, inland from the peninsula, and the county still has active evacuation orders for some areas along the Salinas and Carmel Rivers. On Saturday, more than a hundred people were in evacuation shelters, according to Maia Carroll, the communications coordinator for Monterey County. Some residents have been out of their homes since floods began last Monday.

There were no evacuation orders on the Monterey Peninsula on Sunday, but officials remained on alert across the county for more flooding along the major rivers.

The concerns brought back memories of 1995, when roads into the peninsula were flooded, cutting the region off completely from the rest of the county. The main routes into the region are Highways 1 and 68, which are at risk of flooding if the Salinas River overflows.

Concerns across hard-hit Santa Cruz County, a coastal region south of San Jose, include flooding in the lowlands, a rising tide at the coast and falling trees, but the county’s mountains were uniquely vulnerable to the effects of more rain, said Dave Reid, the director of the Santa Cruz County Office of Response, Recovery & Resilience.

“The challenge for us right now in mountain regions is that any amount of rain, even modest rains, could cause road failures, landslides,” he said. The ground has been saturated with rain for weeks and cannot absorb much more, adding to the potential for mudslides and damaged roads.

Rain and Floods in California

For weeks, a string of major storms have hit California, causing extreme flooding and damage across the state.

Rain was expected into Monday morning in the Santa Cruz Mountains, with a chance that it would continue into the afternoon. Falling trees and mudslides are Daniel DeLong’s primary concerns.

Mr. DeLong, 56, a retired firefighter who lives in Ben Lomond, Calif, a rural town in the Santa Cruz Mountains, describes the recent storms as “much more extreme” than anything he has experienced in three decades living there. His family resides on acres of land full of towering Redwoods and Douglas firs.

“They could just come down and cut your house in half,” Mr. DeLong said. A couple of smaller trees have fallen on his property in the past two weeks but did not cause major damage.

His property is less vulnerable to falling rocks and mud, but the area has experienced road closures from mudslides. Mr. DeLong said it was possible that his family could get trapped on their property should more roads fail.

More than eight feet of snow has accumulated in the Sierra Nevada in the last week. Mountain communities in the Lake Tahoe region, with a fleet of snow removal equipment and avalanche professionals, are built to withstand big winter storms. Problems mount, however, on a holiday weekend when that much snow coincides with the arrival of thousands of people looking for a winter getaway in the Tahoe area, one of the most popular places for downhill skiing in the country.

On Sunday morning, bumper-to-bumper traffic inched up two-lane roads toward the ski resorts located north of Lake Tahoe. The National Weather Service expected another eight to 18 inches of snow to accumulate by Tuesday, with wind gusts up to 80 miles an hour on exposed ridge tops in the Sierra.

When Interstate 80 and Highway 50 were experiencing delays and intermittent shutdowns during heavy snowfall on Saturday, Mr. Mohtes-Chan said the roads were “wild” with multiple spinouts and accidents. While stuck in traffic, people jumped out of their cars to play in the snow, forgetting that they were situated on a major thoroughfare where large snowplows and heavy equipment need access. “People need to slow down and be patient, and they’ll get to their destination,” Mr. Mohtes-Chan said.

On the positive side, the amount of water now in the snowpack rivals that during some of the biggest winters in decades. The Sierra is essentially a large reservoir for all of California — roughly 30 percent of the state’s water supply, on average, comes from the Sierra snowpack — and melting snow in the spring is what keeps water flowing downstream when the weather turns dry.

Downtown Los Angeles received 1.8 inches of rain on Saturday, breaking a record for Jan. 14. The storm inflicted only limited damage: A tree crushed several cars; a boulder and other debris from a mudslide shut down traffic. Near the ocean, surging tides caused up to six inches of water to form ponds in streets, including in Long Beach. And a sinkhole that swallowed two vehicles last week in the Chatsworth neighborhood of north Los Angeles kept growing to nearly the entire width of the road.

Overall, Mark Pestrella, director of Los Angeles County Public Works, described the situation as “10,000 small cuts across the county.” But they all add up. The road system, he said, with the sinkholes and damaged pavement, will cost nearly $200 million to repair, he estimated.

Still, Los Angeles has fared a lot better than other parts of the state, according to Capt. Sheila Kelliher-Berkoh of the Los Angeles County Fire Department. “We’re definitely having our share of things, but it could be worse,” she said.

Ms. Kelliher-Berkoh said that one of the biggest priorities for the department was the Los Angeles River. Often just a dry concrete channel cutting south through the heart of the city, the river became a 10-foot deep torrent during the storms, she said. That flow can be particularly dangerous for people who underestimate the power of the current, especially children and homeless people camping near the banks.

The county, which sits roughly 130 miles east of San Jose in the San Joaquin Valley and is home to nearly 300,000 people, has endured some of California’s most punishing weather conditions. Last week’s flooding forced hundreds of people to evacuate from their homes. Among the hardest-hit areas was Planada, a small farming community 90 minutes’ drive from Yosemite National Park.

The county has already received more than 200 times as much rainfall this month as it did last January. Storm conditions in the area eased on Sunday, but residents braced for another round of heavy rain and possible flooding through Monday.

During a brief respite over the weekend, the California National Guard worked with the county’s Office of Emergency Services to repair and fortify the region’s major waterways, including Bear Creek, which flooded last week.

Evacuation orders in Merced County were lifted and roads began to reopen over the weekend, giving Red Cross workers, local volunteers and members of the Merced County Sheriff’s Office an opportunity to distribute food and water to weary neighbors.