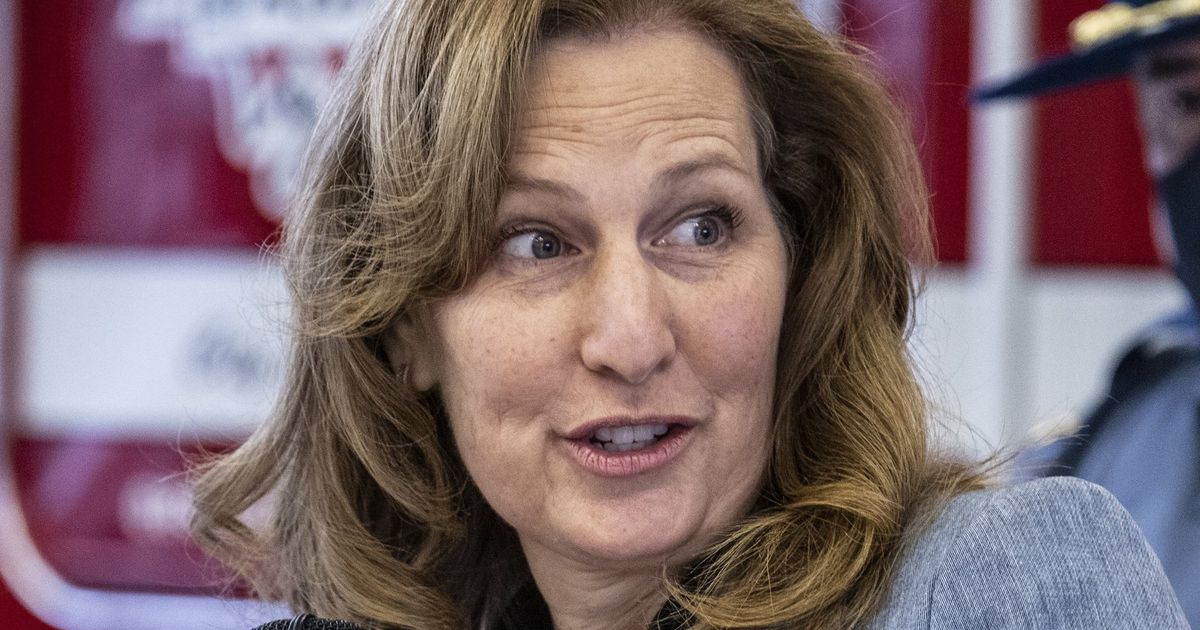 But midterm backlashes flow both ways.

As the 2022 election looms, rising inflation, a continuing pandemic and discontent with President Joe Biden are fueling a potential Republican wave that could sweep Schrier out of office and cost Democrats the House majority. Recent polls have shown a narrow majority of voters favor putting Republicans in control of Congress.

In addition to national trends, new maps drawn by Washington’s bipartisan redistricting commission did nothing to shore up Schrier’s prospects, leaving her in a precarious position next fall.

Schrier was matter-of-fact about her prospects for a third term in an interview last week at a North Bend coffee shop, speaking after a news conference at a nearby fire station to promote the recently passed $1 trillion infrastructure bill.

“The political landscape — it’s a swing district. It’s always going to be a swing district,” she said. “But when people vote, they look at their member. You know, ‘Are they here? Are they working hard? Are they listening?’

“The people in the 8th District know me. They’ve gotten to know me really well.”

Schrier pointed to the infrastructure bill, which could fund amenities across the district, including the project she was in town promoting — a $600 million widening of a notoriously dangerous stretch of State Route 18 near the Interstate 90 interchange.

She also cites a dozen bills she has sponsored that have been signed into law, including one signed by Biden this month delaying scheduled cuts in Medicare payments to doctors.

Republicans, including her challengers, have attacked the infrastructure bill, as well as the 10-year, $2 trillion “Build Back Better” act, a sweeping environmental and social spending package which was passed by the House in November. They argue those measures spend irresponsibly and amount to a massive expansion of government reach.

Schrier said she is not bothered by the price. “It’s paid for,” she said, noting the tax increases aimed at the wealthy in the Build Back Better proposal. She emphasizes benefits such as the extension of a $250- to $300-per-month child-tax credit, $14 billion for wildfire preparedness and historic investments in clean energy.

The Build Back Better proposal was dealt a potentially fatal blow this week by Sen. Joe Manchin, D-W.Va., who said in an appearance on Fox News Sunday that he could not vote for the plan.

The Congressional Budget Office estimates the measure as passed by the House would add $367 million to the federal budget deficit over 10 years, not counting any new revenue from stepped-up IRS tax enforcement funded by the bill.

The playing field for the 2022 election looks largely familiar for Schrier. According to maps drawn by the redistricting commission, the 8th District will continue to span the Cascade Mountains, joining east King and Pierce counties with Kittitas and Chelan counties.

The commission maps were delivered after a Nov. 15 deadline, but the state Supreme Court signed off, declining to redraw them. Government transparency advocates have filed lawsuits over the commission’s secretive final talks.

The new map sheds portions of Pierce County, including much of Auburn, while picking up a large swath of Snohomish County along the U.S. Route 2 corridor. That leaves the new district as one that gave Biden about 52% of the vote last year, but also narrowly backed Republican gubernatorial challenger Loren Culp over Gov. Jay Inslee.

“Assuming the map stands, it’s a toss-up,” said David Wasserman, senior editor for The Cook Political Report, a top national election forecaster. Schrier beat Jensen by just a few percentage points in 2020, he noted, “and the political environment is better for Republicans now.”

Wasserman noted Republican wins this year in New Jersey, where a top Democratic legislator was beaten by a truck driver who spent $153 on his campaign, and Virginia, where Republican Glenn Youngkin was elected governor, as powerful indicators.

“If the elections were held next week, my guess would be that Republicans would pick up between 20 and 30 seats [in the House],” he said.

Democrats now hold a 221-213 advantage in the House (with one vacant seat due to the death of Rep. Alcee Hastings, D-Florida).

“Given those numbers I think we are still feeling good about Kim, and we will move heaven and earth to make sure she can win,” she said. “If she can beat Dino Rossi, she can definitely beat any of these three guys on the ticket.”

A member of the House’s centrist New Democrat Coalition, Schrier serves on the Agriculture and Energy and Commerce committees. She has voted with the Biden administration position 100% of the time in 2021, according to FiveThirtyEight.

Schrier’s challengers, as well as national Republican groups, have targeted her regarding rising crime, at times seeking to tie her to scenes of open drug use and disorder in Seattle, which is not part of the 8th District.

Larkin has garnered attention on Fox News with his slogan “Make Crime Illegal Again” and says problems in Seattle are seeping into surrounding communities.

Republicans also have sought to link Schrier to efforts to defund the police, which she says she has never supported. “Anybody who tells you that I want to defund the police is not telling you the truth,” she said, adding that she’s supported funding for local police departments to obtain body cameras and has done ride-alongs with officers in Bonney Lake, Auburn and Kent.

Schrier also has come under fire for failing to promptly disclose a major stock purchase, as required by a 2012 law, known as the STOCK Act, designed to prevent insider trading by members of Congress.

She and her husband bought between $500,000 and $1 million worth of Apple stock July 27, but did not disclose it until a filing Nov. 12, more than two months after the 45-day legal deadline under the law.

Schrier has apologized for the error and said in an interview her husband, David, did not initially tell her about the purchase. “David handles all of the investments,” she said. “We have our own lanes.” Once he told her, she said she reported the transaction.

Schrier said she and her husband will put their investments in a blind trust to avoid any future problems or appearances of a conflict of interest.

The National Republican Campaign Committee slammed the STOCK Act violation as “shady” in a statement, contending Schrier “would rather use her official position for personal profit than help Washington State Families.”

An investigation by Business Insider reported Schrier is among 52 members of Congress who have violated the STOCK Act, flagging her as the only member of Washington’s delegation to do so.

The trio of GOP challengers have started to scrap for advantage in next year’s August primary, where they’ll battle it out to face Schrier in November.

Dunn’s entry into the race this month came with the endorsement of former U.S. Rep. Dave Reichert, whose retirement in 2018 opened the door for Democrats to flip the traditionally Republican-held seat.

In announcing his candidacy, Dunn spoke of his mother, the late Rep. Jennifer Dunn, who represented the 8th District for six terms, saying “we’re going to go take Mom’s seat back.”

That presumptiveness drew blowback from Jensen, who said he can contrast himself as an outsider heeding a “call to service.” He served four combat tours as an Army Ranger and was awarded two Bronze Stars. In recent months, he has worked with other veterans to help evacuate Afghans who helped the U.S. war effort.

“I am not running for a promotion, nor am I running on the biography of my mother,” Jensen said.

Larkin, who worked briefly as a deputy prosecutor before taking a job as an executive at his family’s manufacturing company, said he’s the true conservative in the race, citing Dunn’s embrace of abortion rights and same-sex marriage.

“I am the only one who is pro-life … There are certain things like that where it is a clear lane for us,” Larkin said.

As she gears up for the campaign, Schrier said she believes her years of traveling across the district — and going to bat for apple growers and hay farmers — have helped her make inroads even in the more conservative counties.