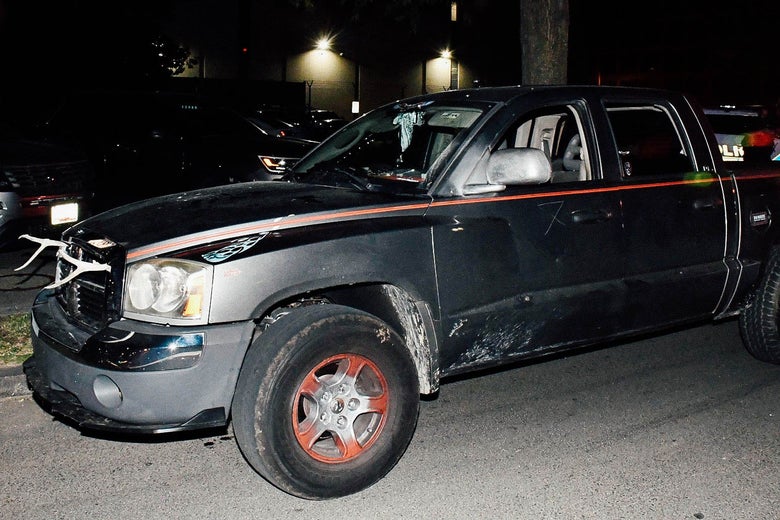 Seems like the U.S. Capitol Police probably got this one right:

“This is good police work plain and simple,” said Chief Tom Manger. “We applaud the officers’ keen observation and the teamwork that resulted in this arrest.”

Around midnight, a Special Operation Division Officer was on patrol when he noticed a Dodge Dakota pickup truck, with a swastika and other white supremacist symbols painted on it, outside of the DNC headquarters. The truck did not have a license plate. Instead, a picture of an American flag was placed where the license plate should have been. The Capitol Police officer pulled over the truck along the 500 block of South Capitol Street, SW.

The officers noticed a bayonet and machete, which are illegal in Washington, D.C., inside the truck.

Keen indeed! It does seem like the kind of truck one would want to keep an eye on, law enforcement–wise.

The statement says the suspect began speaking about “white supremacist ideology” when confronted, but that it’s not yet known whether he was “planning to attend any upcoming demonstrations or if he has ties to any previous cases in the area.” This is an allusion to the right-wing rally called “Justice for J6” planned for this Saturday in the District of Columbia; its purpose is to support the individuals who were arrested and charged for crimes related to the last major right-wing D.C. rally, on Jan. 6 of this year, which culminated with a violent attack on the Capitol building.

A daily email update of the stories you need to read right now.

Speaking of Jan. 6, on Monday, Politico published a teaser from an upcoming book by former White House press secretary and Melania Trump chief of staff Stephanie Grisham. It includes this alleged exchange on the day of the Capitol riot:

“Do you want to tweet that peaceful protests are the right of every American, but there is no place for lawlessness and violence?” Grisham asked the first lady.

A minute later, Melania replied with a one-word answer: “No.” At that moment, she was at the White House preparing for a photo shoot of a rug she had selected

Despite their rather different personal aesthetics, the former first lady and the white supremacist antler-truck nightmare man are political allies. Her family’s work—enriching itself and punishing perceived enemies—benefits from the collective voting power and physical threat of conspiracy-fueled nationalist rage. At the same time, violent nationalists benefit not just from policies that perpetuate conservative white dominance but (except in extreme cases like this one) the protection afforded by their importance to a major party. It’s at this point the mainstream Republican position, for example, that social media companies shouldn’t try to limit hate speech on their platforms and that states and localities shouldn’t have the right to prevent heavily armed gangs and “militias” from making shows of force in public spaces. That’s coalition politics, baby!