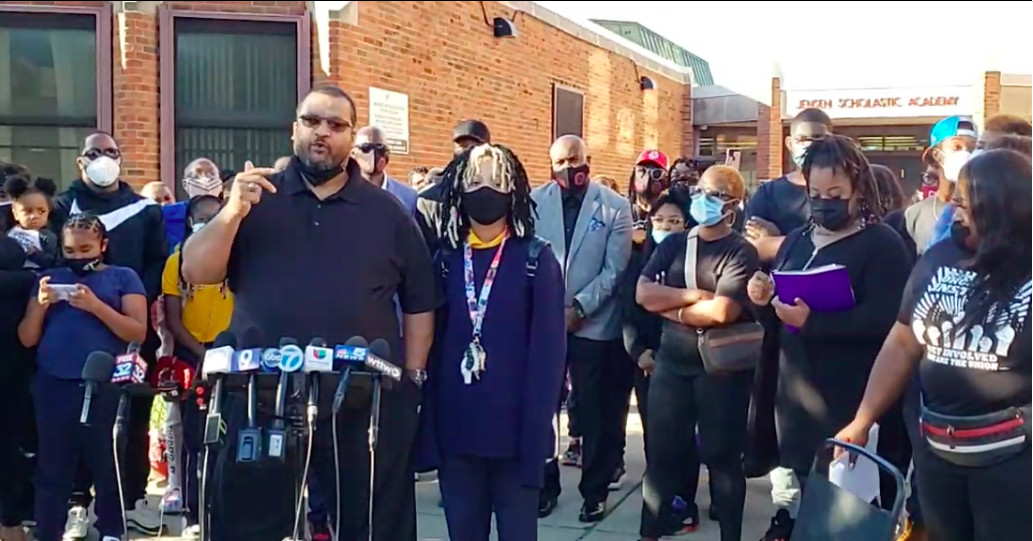 In the wake of the deaths of two mothers from COVID-19 in one elementary school community and with a Thursday deadline for a districtwide testing rollout looming, Chicago will bring in the region’s largest pediatric provider to back up surveillance efforts.

Lurie Children’s Hospital of Chicago will provide additional testing services at any campus where there are five or more COVID-19 cases confirmed within 14 days, the district said as news surfaced that two Jensen Elementary Scholastic Academy mothers had died late last week from complications related to coronavirus.

“We do not have evidence of any large-scale outbreak at this school,” said Arwady.

Chicago Public Schools is on track to meet a deadline later this week to offer surveillance testing for asymptomatic students and staff at every campus, she said, after that program was twice delayed.

But standing outside Jensen Elementary on Chicago’s West Side Tuesday afternoon, parents described heartbreak at the deaths of the mothers in their community and said they were outraged that, even after 11 of 17 classrooms were quarantined last week, testing had not been offered to asymptomatic students until earlier that day.

“We are demanding a shutdown, we are demanding that CPS do something. We are going to demand action until something is done,” said Jermaine Thomas, a member of the Local School Council.

“Why do we have to keep repeating ourselves over and over?” asked Shauntee Colston, a father who spoke outside the school with his daughter, Saraiah. “Close the school. Deep clean the school. I want my daughter to come home from school, safely.”

The deaths at Jensen have prompted scrutiny of the district’s COVID-19 safety plan just as a new schools CEO, Pedro Martinez, is scheduled to start on the job. Martinez’s first day is Wednesday.

Martinez arrives as the city’s teachers union amplifies its call for stricter safety protocols, including districtwide testing and thresholds for shutting down campuses when case counts are too high. So far, the union and district officials have failed to reach an agreement, an ongoing cause of concern for teachers.

Some parents and educators have said that tightening up Chicago’s COVID-19 testing protocols should be Martinez’s first priority.

According to the union and parents at the school, the mothers who died each had children who had been quarantined at Jensen.

As of Sunday, the district had confirmed eight COVID-19 cases among students and staff at Jensen, including some siblings and exposures that had been traced to events outside the school. More than 200 students or staff at the school have been identified as “close contacts” of someone who tested positive for COVID-19. Multiple classrooms have been quarantined in the past weeks, with some students returning Monday.

On Tuesday, Arwady called the deaths of the mothers tragic and said she understood why some in the community wanted to direct blame at the school, but that there was no evidence so far to connect the cases to in-school transmission. The city’s public health department is still investigating the situation, she said, and so far evidence showed that administrators had followed protocols set by the district when cases are reported.

“There is a lot of desire to try to pin blame,” said Arwady, who flagged misinformation being spread about the investigation at Jensen, “and I would be remiss if I didn’t say that the blame here is on the virus at the end of the day.”

Chicago schools reopened full-time to students on Aug. 30. So far, citywide data has not shown significant increases in the number of COVID-19 cases among children under 17, and hospitalizations in the weeks since school reopened are down compared to the weeks prior. Among 341,000 students, Chicago Public Schools contact tracers have confirmed 200 “actionable” cases among adults and 595 cases among students since the start of school, according to district data.

Actionable cases are all confirmed cases, including those self-reported, but officials have cautioned that they don’t necessarily mean someone caught the virus at school.

The district has more recently started updating its online tracker daily, but the district data has come under scrutiny for inconsistency and reporting lags. Parents have said they’ve received reports of school cases that have not appeared on the site.

Officials have said numbers are updated regularly, which could lead to disparities, and that delays in contact tracing could also explain some discrepancies. District administrators pledged last week in front of the city’s school board to triple the number of contact tracers and launch contract tracing efforts more quickly, within 48 hours.

Chicago Public Schools is also staring down a Thursday deadline to roll out a COVID-19 testing program at each of its 520 district-run campuses. The deadline for the program was originally the start of school, but has since been pushed back twice as Chicago confronted logistical problems, including background checks of staff hired by the Massachusetts-based testing vendor Thermo Fisher.

Last week, the district offered testing at 314 schools, according to district data. As of last Wednesday, only about 3% of students had parents or guardians opt them in for a testing — a percentage officials flagged as concerningly low.

Parents or guardians must also consent for children to be tested by Lurie, through a separate opt-in form.