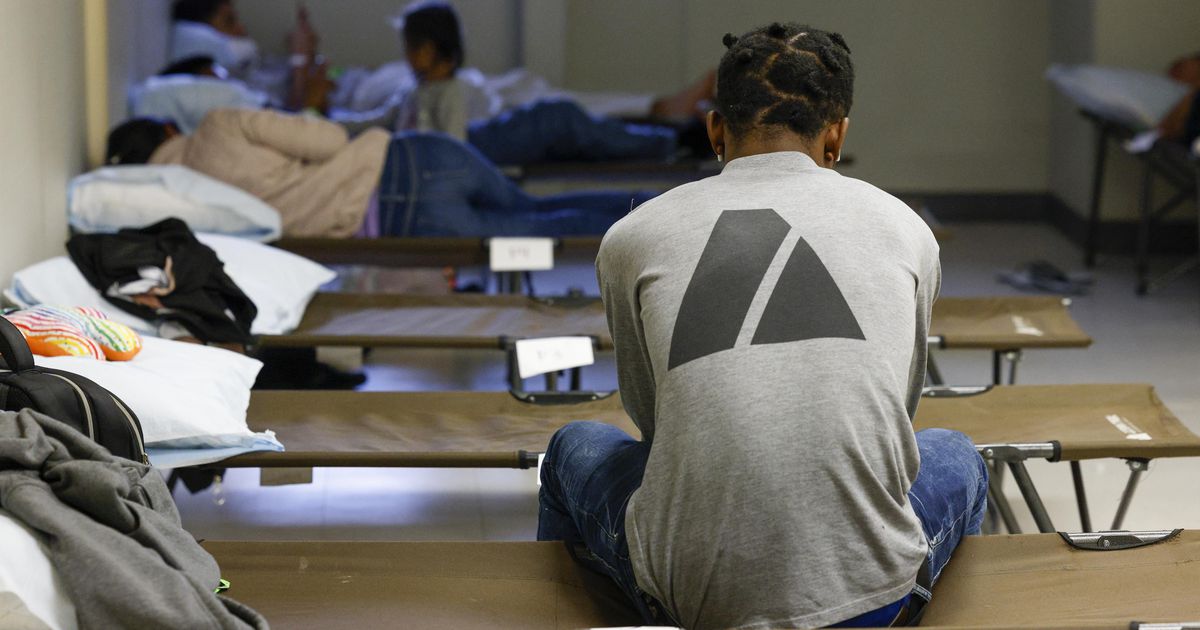 From Dallas, they will be helped to book travel to their final destinations as they await court hearings that will likely include asylum pleas.

The migrants, who had already been processed by immigration officials in El Paso, arrived at Oak Lawn United Methodist Church where they were welcomed by volunteers. Nearly all traveled as families by bus and came from Haiti, Venezuela, Ecuador and Bolivia. One mother carried a 3-month-old.

They will have to defend themselves from deportation at later dates, and many are expected to seek asylum in the crowded federal immigration courts.

“I can’t see people without a way to find their home, their destination,” said Almas Muscatwalla, executive director of Faith Forward Dallas. Muscatwalla said she believes larger changes are needed to repair a chaotic immigration system, but, she added, that’s a conversation for another day. In the interim, she is called to help.

“We feel, as faith leaders, it is the ethic of all of our traditions to welcome strangers into our home,” Muscatwalla said. “That exemplifies what society should be.”

The migrant families arrived at the stately brown brick UMC church on Oak Lawn Avenue shortly before 7 a.m. and passed a sign that read: “All Are Welcome Here.” Some were heavily pregnant. Others lacked shoes or hadn’t showered for weeks. But inside an air-conditioned hall, they received food, chicken and eggs and energy bars, and help in making plans for their next travel destination, which included cities in Florida, New York and New Jersey.

The first faces that greeted the migrants in Dallas were those of friendly volunteers representing a variety of faiths – and also a variety of reasons for their desire to help. Many of the volunteers were Christians, but others were Muslim or Jewish. A few volunteers were migrants themselves or descended from people who migrated to the United States.

“Everyone has a unique situation,” said Mercy Torres, a 20-year-old volunteer from Ohio who took the 9-hour bus ride along with the migrants. Torres’ grandparents immigrated to the United States from Mexico. Like other volunteers, Torres saw her service as a way to give back.

Oak Lawn United Methodist Church Pastor Isabel Marquez migrated to the United States from Mexico as a pregnant 17-year-old. She can relate to what those who got off the bus Wednesday are thinking about and going through.

“I’ve been in their situation, and I’ve been in their shoes,” Marquez said while trying to coordinate flights and other logistics for the newly arrived migrants. “That’s why, when I welcome them here, I tell them they’re in a safe space.”

The church plans to receive buses once a week — with groups of 60 to 80 people each. There is no expected end time for the arrivals of migrants.

But there are needs: the church and Faith Forward are always looking for volunteers, as well as donations of money, clothes, backpacks and shoes. The church hopes to be able to install portable showers in its parking lot sometime in the near future.

“People here are going beyond their differences,” said Muscatwalla, the Faith Forward leader. “If the divine is watching over us, he’s going to have a smile on his face.”

The transfers were coordinated from El Paso by Ruben García of the Catholic-oriented Annunciation House, a private nonprofit that has helped migrants with shelter for decades. In recent years, Garcia has run a network of 18 “hospitality sites,” church halls to gyms in El Paso, Deming, N.M., Las Cruces, N.M., and Albuquerque. In May, Garcia said that his private network needed to expand to other transportation hubs, such as Dallas and Denver, because of rising numbers of asylum-seekers. Already, García works with shelters and volunteer groups from San Diego to Brownsville, he has said.

In a text, Garcia said the asylum-seekers were released by the Border Patrol of Customs and Border Enforcement and Immigration Customs Enforcement, agencies of the U.S. Department of Homeland Security.

A federal government spokeswoman didn’t respond to questions about the arrival of the buses. Dallas is one of several cities across the U.S. under consideration by federal officials in a plan to move migrants to reduce overcrowding at the border, according to an NBC News report.

“It is heartbreaking to see so many families and babies and pregnant women,” said Anna Nuñez, a volunteer with the Church of Latter Day Saints. A few families didn’t have sufficient money to purchase airline tickets to the East Coast, she said.

Nuñez, a Spanish-speaking daughter of an immigrant, helped such quiet relief efforts at the church last year, but said volunteers are now ramping up to assist weekly. Especially helpful was Catholic Charities of Dallas, who provided buses and drivers to take families to the DFW International Airport, Nuñez said.

In May, migration arrests by the U.S. Border Patrol hit a historic monthly high of about 222,000. The last time the monthly number was nearly that high was in March 2020 when there were 220,000 arrests, according to Border Patrol statistics.

But current numbers are inflated some by a controversial pandemic-related measure known as Title 42. The public health order results in many migrants trying to enter the U.S. multiple times because there are no legal consequences as there would be under immigration law.

Arrests represent the number of attempts by migrants–not actual migrants, immigration experts note. In May, federal immigration officials said about a quarter of those encountered had made at least one other try to cross the border.

Texas Gov. Greg Abbott, who is running for re-election, began sending dozens of migrants released by federal immigration officials in Del Rio to Washington, D.C. in mid-April. Abbott accused the administration of President Joe Biden of failure in managing immigration. Many migrants interviewed said they appreciated the free trips to the East Coast that put them closer to their intended destinations.