CNN raised eyebrows over an article plastered on its website targeting “angry White men” following the acquittal of Kyle Rittenhouse.

“The specter of the angry Black man has been evoked in politics and popular culture to convince White folks that a big, bad Black man is coming to get them and their daughters… But as I’ve watched three separate trials about White male violence unfold across the US these past few weeks – the Kyle Rittenhouse trial, the Ahmaud Arbery death trial and the civil case against organizers of the 2017 Unite the Right rally in Charlottesville – I’ve come to a sobering conclusion: There is nothing more frightening in America today than an angry White man,” CNN writer/producer John Blake wrote on Saturday.

“It’s not the ‘radical Islamic terrorist’ that I fear the most. Nor is it the brown immigrant or the fiery Black Lives Matter protester, or whatever the latest bogeyman is that some politician tells me I should dread. It’s encountering an armed White man in public who has been inspired by the White men on trial in these three cases.”

Blake clarified there’s “nothing inherently violent about White men, or any human being” but that a “vision of White masculinity that allows some White men to feel as if they ‘can rule and brutalize without consequence,’” quoting author Ibram X Kendi.

Kyle Rittenhouse with his attorneys at the Kenosha County Courthouse in Kenosha, Wisconsin. Police departments across the country said they were ensuring the right to peaceful protests following his not guilty verdict Friday. (Sean Krajacic/The Kenosha News)

“This angry White man has been a major character throughout US history. He gave the country slavery, the slaughter of Native Americans, and Jim Crow laws. His anger also helped fuel the Jan. 6 insurrection at the Capitol. It’s this angry White man – not the Black or brown man you see approaching on the street at night – who poses the most dangerous threat to democracy in America.” Blake wrote in CNN’s “analysis” article. “That’s a sweeping claim. But these trials represent something bigger than questions of individual guilt or innocence. They offer a disturbing vision of the future, and a choice about what kind of country we want to live in.”

The CNN writer went on to argue that “race” was an “inescapable theme” in the three trials he cited, including the Rittenhouse case that involved no Black victims nor any evidence that Rittenhouse was a White supremacist, but because the men he shot were “during racial protests.”

“This is what that future looks like: More angry White men emboldened by ‘stand your ground’ and citizen’s arrest laws, inspired by a conservative interpretation of the Second Amendment. And more dead Americans,” Blake later wrote. 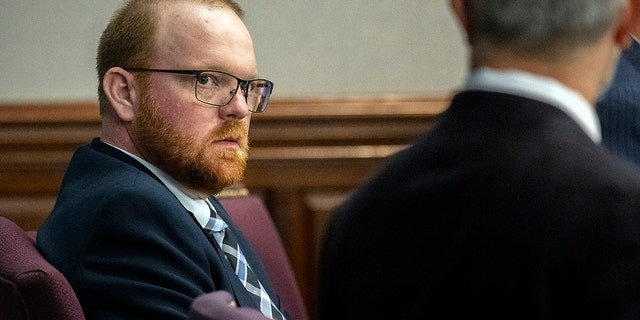 Travis McMichael, one of three men charged in the February 2020 slaying of 25-year-old Ahmaud Arbery, listens to an attorney at the Glynn County Courthouse on Nov. 4, 2021, in Brunswick, Georgia.  (AP Photo/Stephen B. Morton, Pool)

“Enough with the casual racism from news outlets. The guy spends the first few paragraphs decrying stereotypes of African American men and then the rest of the article promoting similar stereotypes about men with a different skin color. How did this become acceptable/normal?” conservative writer A.G. Hamilton asked. “Honestly could not imagine thinking about another group of people this way based on their race or religion, but bigots have broken brains and they always think their bigotry/hate is justifiable. We need people to stand up against this. That includes people at CNN.”