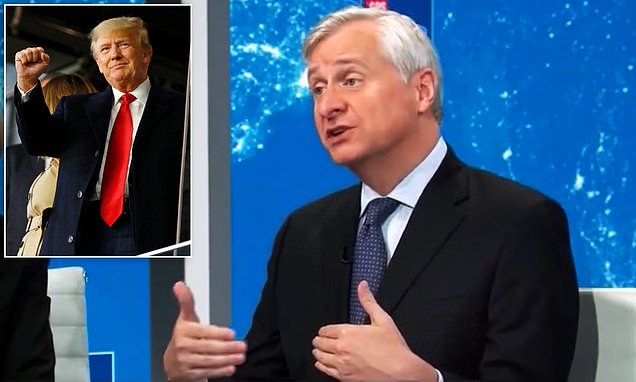 Presidential historian and former Biden speechwriter Jon Meacham said that he believes if ex-President Donald Trump runs for a third time in 2024, America may be thrown into a civil war as Democrats continue to press for voting rights legislation.

Meacham, a regular CNN contributor, appeared on Fareed Zakaria’s Sunday show on the network, where the host said Trump will claim he won regardless of the results in 2024.

‘Doesn’t that present us with a constitutional crisis?’ Zakarias asked.

‘I think it’s an unfolding one,’ Meacham replied, calling it ‘an interesting use of the word crisis.’

Meacham said the riot at the Capitol on January 6 was the closest America came to forfeiting its Democracy since the Civil War.

‘I think we came as close to losing the Constitution… that day as we have since Fort Sumter,’ he said.

Meacham said on CNN Sunday that he believes if ex-President Donald Trump runs for a third time in 2024, America may lose it’s very Constitution

Fellow historian Doris Kearns Goodwin joined the panel and argued that securing voting rights and securing peaceful transition of power is ‘the fight of our life right now,’ suggesting that state legislatures overturning elections could mean every election could be contested.

Earlier in December, President Biden pledged while speaking to world leaders that he will keep voting rights legislation a ‘priority’ as he opened up his Summit for Democracy at the White House Thursday morning.

The president is convening participants from some 110 countries with the aim of reversing the ‘backwards slide of democracy,’ a trend on display around the world and in the United States.

‘My administration is going to keep fighting to pass two critical pieces of legislation that will shore up the very foundation of American democracy, the sacred right of every person to make their voice heard through free, fair and secure elections,’ Biden said.

The John Lewis Voting Rights Act, passed in August by the Democrat-controlled House of Representatives, remains stalled in a deadlocked Senate.

Meacham suggested that the anger and disillusion Republicans feel comes from the party not delivering on policies.

He talked about everyone from Dwight Eisenhower to George W. Bush to Ted Cruz as making what Zakarias called ‘crazy promises’ to the base without delivering.

‘It’s the will to power. Democracy is not the natural state of things. We are emotional creatures. The insight of the founding was that if we had the chance to do something, we would do the wrong thing.’

He’s also a frequent critic of Trump, having accused him of treason.

His comments come after three retired US generals warned that America’s divided military could fuel a new civil war if there’s another coup attempt after the 2024 election because ‘more than 1 in 10 of those charged in January 6 attacks had a service record’.

‘As we approach the first anniversary of the deadly insurrection at the US Capitol, we – all of us former senior military officials – are increasingly concerned about the aftermath of the 2024 presidential election and the potential for lethal chaos inside our military, which would put all Americans at severe risk,’ the generals penned.

‘We are chilled to our bones at the thought of a coup succeeding next time,’ they added.

The generals referenced January 6, 2020, when thousands of fiery patriots and Donald Trump supporters stormed the Capitol building, which resulted in the death of five people

‘In this context, with our military hobbled and divided, US security would be crippled. Any one of our enemies could take advantage by launching an all-out assault on our assets or our allies,’ the column read.

They emphasized: ‘The military and lawmakers have been gifted hindsight to prevent another insurrection from happening in 2024 – but they will succeed only if they take decisive action now’.

Eaton, 71, was in charge of training Iraqi troop during Operation Iraqi Freedom between 2003 and 2004 during. After he retired, Eaton became a vocal critic of former President George W. Bush, who spearheaded the war in Iraq., and is currently a senior adviser to VoteVets.

Taguba, 71, spent 34 years in the military and made headlines for an internal United States Army report on the abuse of detainees held at Abu Ghraib prison in Iraq when it was leaked in 2004.

Anderson, 65, had a  31-year career in the armed forces, including 15 months working under General David Petraeus as a in Iraq.

Most recently Robert Palmer (pictured), 54, was sentenced to 63 months for his involvement in the January 6 riot, where he assaulted police officers with a fire extinguisher and hurled wooden boards at them

The three retired generals noted that the events that unfolded on January 6, 2020 – when thousands of fiery patriots and Donald Trump supporters stormed the Capitol building and resulted in the death of five people – showed that ‘the signs of potential turmoil in our armed forces are there’.

Since, at least 185 people in attendance have since been charged with assaulting or impeding police in a failed bid to stop Congress from certifying Joe Biden’s presidential election victory.

The three generals were sure to note that ‘more than 1 in 10 of those charged in the attacks had a service record’.

Meacham, a 2009 Pulitzer Prize winner for a biography on Andrew Jackson, was previously dropped by MSNBC after he failed to disclose that he had been helping write Biden‘s speeches.

Meacham, however, did not tell his employers that he himself had been involved in crafting Biden’s speeches, including his acceptance address in Wilmington, Delaware, The New York Times reported.

A NYT report revealed Meacham had been helping craft Biden’s speeches including the victory speech the president-elect delivered in Wilmington, Delaware on Saturday night

Meacham and Biden have had a close relationship over the years. They are pictured together above at the the Joseph R. Biden, Jr. School of Public Policy and Administration at the University of Delaware

The report revealed Meacham had been ‘playing a larger role’ in Biden’s campaign ‘than was previously known’, including writing the president-elect’s acceptance speech at the Democratic National Convention last summer as well as his speech in Gettysburg.

Meacham had appeared on the network three times since Biden’s remarks on Saturday, including one appearance in which he analyzed the speech.

He was asked to weigh in on the address during an on-air conversation with anchor Brian Williams.

‘I’m not the historian that you are, and I don’t have the Pulitzer that you do, but do you concur that is the way we are used to hearing from our presidents?’ Williams asked.

‘Absolutely,’ Meacham said, without admitting he played a role in the writing process.

Meacham had reportedly been ‘playing a larger role’ in Biden’s campaign ‘than was previously known’, including writing the president-elect’s acceptance speech at the Democratic National Convention this summer. He is pictured at the DNC

A Biden spokesperson on Monday downplayed Meacham’s involvement, telling the Times Biden had written his own victory speech on Saturday but had ‘consulted a number of important, diverse voices as he often does.’

Another campaign official said Meacham had contributed to the ‘themes’ included in Biden’s remarks.

Although the source did not specify which themes, parts of Biden’s speech echoed Meacham’s 2018 book –  The Soul of America: The Battle for Our Better Angels –  as he spoke of ‘rebuilding the soul of America.’

A person close to the matter told DailyMail.com Meacham will no longer serve as a paid contributor for MSNBC but will be welcome as a guest with full disclosure of his involvement with Biden’s team.

Similarly, Dr Ezekiel Emanuel, who will serve on Biden’s Coronavirus Task Force, will no longer be a contributor for the network but will return as a guest.

Despite his close ties to Biden, Meacham is reportedly not expected to join his administration.

MSNBC declined to comment to DailyMail.com when asked about Meacham’s omission.

On Tuesday, Tom Elliott, the founder and news editor of media company Grabien, said the revelation came as no surprise.

‘In a year of media shocks, this was not one. Anyone who’s tuned into ‘Morning Joe’ over the last year already knows that Meacham’s ‘analysis’ sounds no different than what you’d expect from a Biden campaign’ spokesperson,’ he told Fox News.