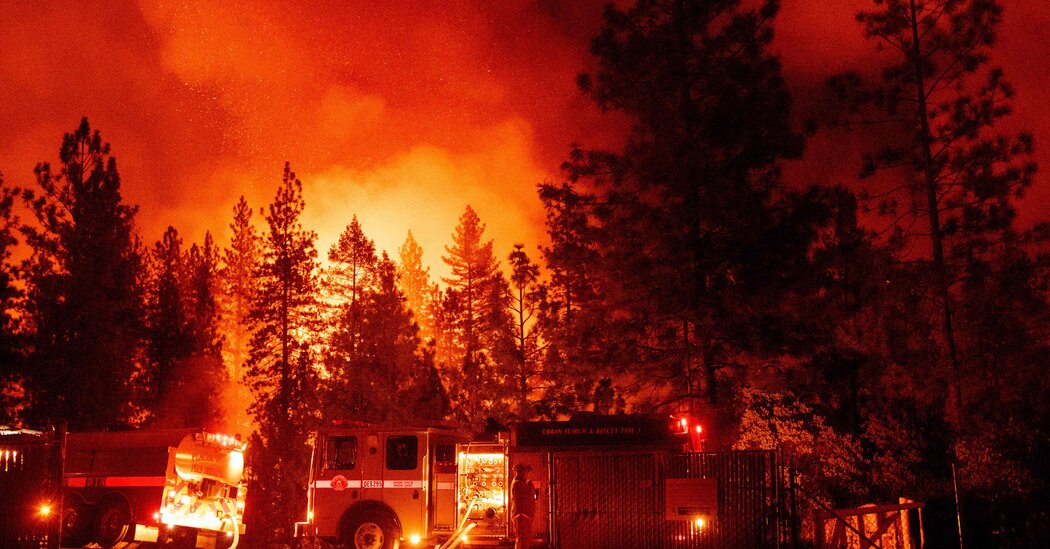 This article is part of Climate Solutions, a special report on efforts to make a difference, coinciding with The New York Times Climate Forward conference and Climate Week NYC.

On a muggy day in Tampa this summer, Gov. Ron DeSantis of Florida took the podium and unleashed an attack on what he claimed was one of the principal threats to the livelihoods and freedoms of upstanding American citizens.

“This is something in many respects that is crushing the little guy,” he said. “So we want to make sure that we’re standing on the side of average people.”

Mr. DeSantis was not talking about aggression from overseas, high gas prices, inflation, pandemic lockdowns or even the Democratic Party.

Instead, he was talking about the rise of E.S.G., a catchall term in the corporate world used to denote a business’s focus on issues like climate change and diversity.

Standing before a banner that read, “Government of Laws, Not Woke CEOs,” Mr. DeSantis railed against companies that he said were trying to use their power to advance a liberal agenda.

“From Wall Street banks to massive asset managers and big tech companies, we have seen the corporate elite use their economic power to impose policies on the country that they could not achieve at the ballot box,” he said.

Mr. DeSantis went on to announce measures intended to reduce the role of E.S.G. — or “environmental, social and governance” policies — in investing in Florida’s pension system. In doing so, he said, he was “asserting the authority of our constitutional system over ideological corporate power.” Besides stoking fears of globalism, it was a message likely to resonate with his base.

The need for more such policies and commitment of funds for climate mitigation and adaptation will be among the topics discussed this week as scientists, corporate sustainability officers, government officials and others, including former Vice President Al Gore and John Kerry, now the U.S. special presidential envoy for climate, gather in New York for The New York Times Climate Forward conference.

The event is part of Climate Week, an annual global summit that runs during the United Nations General Assembly, where the role of corporations in combating climate change and achieving social justice is emphasized, with such panels as “Investing in Equity and the Economy.”

But in recent months, what has become a plain vanilla bit of sustainability reporting in other parts of the world has, along with the related term “stakeholder capitalism,” emerged as the latest front in the culture wars roiling American politics.

Conservatives in the United States, closely aligned with the oil and gas industries, have begun calling foul as companies and investment firms embrace efforts to reduce greenhouse gas emissions and address international and local inequities. And in recent months, they have pushed beyond rhetoric to punish corporations that they say are unduly focused on issues that they argue are unrelated to a company’s bottom line.

“There’s a lot of politics around the term E.S.G. right now,” said Reid Thomas, a managing director at JTC, a fund manager. “You’ve got different sides pushing back at each other.”

Yet even as the rhetoric heats up, and executives brace for more attacks by Republican politicians, most companies and investment firms are standing their ground. Many corporate leaders say that, as a long-term strategy, it is in their best interests to invest in climate solutions and their work forces — and worth the uncomfortable public relations moments in the short term.

More on Ron DeSantis and His Administration

Laurence D. Fink, the chief executive of BlackRock, the world’s largest asset manager, is a frequent champion of E.S.G. He defended the firm’s policies in his annual letter to chief executives this year.

“Stakeholder capitalism is not about politics,” he wrote. “It is not a social or ideological agenda. It is not ‘woke.’ It is capitalism, driven by mutually beneficial relationships between you and the employees, customers, suppliers, and communities your company relies on to prosper.”

Tensions between conservative and corporate America have been growing for years. After the election of former President Donald J. Trump, many chief executives found themselves at odds with the White House on issues including immigration, race relations and efforts to mitigate climate change by reining in oil and gas production and use.

Now, in addition to staking out policy positions that are unpopular with many Republicans, big corporations and investment firms are working to integrate E.S.G. more deeply into their businesses.

Rarely do the setting of such goals result in swift and dramatic changes to how firms operate. And indeed, many companies are accused of greenwashing — touting their commitments to E.S.G. without instituting any real reforms.

Nevertheless, conservative leaders are now taking on the biggest companies in the country, attacking E.S.G. and working to portray environmental and social priorities as bad for business and politically motivated — evidence, they charge, that corporate America is committed to globalism and in cahoots with the left.

A record number of anti-E.S.G. shareholder proposals were introduced over the last year.

Texas became the first state to pass a law that barred major financial institutions from state business if they were deemed to be “boycotting” the oil and gas industry. In truth, the financial firms targeted by the law still do ample business with the fossil fuel industry, but have pulled back lending for some parts of the oil and gas business that they believe to be poor investments.

How Times reporters cover politics. We rely on our journalists to be independent observers. So while Times staff members may vote, they are not allowed to endorse or campaign for candidates or political causes. This includes participating in marches or rallies in support of a movement or giving money to, or raising money for, any political candidate or election cause.

At the same time, Republican state attorneys general have targeted BlackRock, accusing it of putting its “climate agenda” ahead of clients and being in league with climate activists because it is supporting the goals established at the Paris climate conference in 2015 and working on efforts to phase out fossil fuels, which are dangerously warming the planet.

Former Vice President Mike Pence, a potential presidential contender in 2024, said this summer that he wanted to “rein in” E.S.G.

A financial firm that says it is guided by biblical principles, Inspire Investing, lashed out at companies pursuing E.S.G. efforts, saying that the term has “become weaponized by liberal activists to push forward their harmful, social-Marxist agenda.”

Elon Musk, the world’s richest man, has also soured on the term. “ESG is a scam,” he wrote on Twitter earlier this year. “It has been weaponized by phony social justice warriors.”

And with each passing week, more states are taking steps to penalize companies they say are unduly focused on climate issues, with Mr. DeSantis making good on his threat to ban E.S.G. considerations from its pension fund managers, and Texas expanding its list of banned financial institutions to include many of the world’s biggest banks.

“I see this anti-ESG push as the next extension of the ongoing culture war,” Kristoffer Inton, an analyst with the research firm Morningstar, said in a recent report. “Many of these thoughts, and even some of the bills, are written without a great understanding of sustainable investing. Any investor who ignores ESG risk, like any other risk, does so at their own peril.”

Yet as the right ratchets up its attacks on companies, most executives are staying the course, at least for now.

“We see E.S.G., or resilience, or more specifically our decarbonization and diversity programs, as ways to enhance long term value for our companies,” said Jean Rogers, head of E.S.G. at Blackstone, the world’s largest private equity firm. “So we are really not looking at the political fray.”

Companies say that their efforts to reduce emissions are sound long term investments because the risks of climate change are increasingly material, and that efforts to promote more diversity among their work forces improves corporate culture.

“Fund managers and investors aren’t really deterred by all of the noise,” Mr. Thomas said. And, he said, “the money is flowing” in the direction of investing in issues like climate and equity.

BlackRock has defended its stance as a sound investment strategy. “We believe investors and companies that take a forward-looking position with respect to climate risk and its implications for the energy transition will generate better long-term financial outcomes,” the company wrote.

Many other big companies have taken similar positions.

“The market is recognizing this and doing it because it’s good for business, not because it’s part of a political agenda,” said Steven M. Rothstein, managing director at the Ceres Accelerator for Sustainable Capital Markets, a group that supports sustainable businesses.

What is more, plenty of opportunistic corporations sense that there is money to be made as more renewable energy projects are built around the world.

“This transition can lead to enormous opportunities,” Mr. Rothstein said. “There will be trillions invested in green technologies.”

Given the absence of uniform standards, what people mean when they say E.S.G. is constantly evolving. After Russia launched its full-scale invasion of Ukraine in February, analysts at Citi made the case that weapons makers and defense contractors should qualify as socially positive investments because they were helping protect democracy.

Making matters worse is the fact that even those who support corporate efforts to combat climate change acknowledge that some funds and companies that boast of their environmental accomplishments are overstating their impact.

“E.S.G. funds do a lot of greenwashing, which we know,” said Mary Cerulli, founder of Climate Finance Action. “It’s tainted the whole legitimacy of the broader framework.”

‘Climate is a risk’

For now at least, conservatives appear to have the upper hand in the battle to control the public narrative.

“They’ve been spinning this narrative that E.S.G. is ‘woke,’ and they’ve had a big head start in messaging,” Ms. Cerulli said.

Prominent conservative commentators have amplified the message, often misrepresenting what the term means.

“E.S.G. has no real definition, but in effect it requires companies and countries to shut down their most productive sectors in the name of climate change and equity,” the Fox News host Tucker Carlson said in a segment this summer.

And yet even as the attacks continue, big companies appear to be moving forward with their efforts to prioritize environmental issues.

The majority of anti-E.S.G. shareholder proposals have failed to gain support from investors, according to the Morningstar report. More than 90 percent of companies in the S&P 500 Index now publish an E.S.G. report. And the Securities and Exchange Commission is considering adopting new rules that would require public companies to submit more detailed analysis of climate related risks and greenhouse gas emissions.

“The private market is speaking,” Mr. Rothstein said. “And they are saying that climate is a risk.”