First Trust Advisors chief economist Brian Wesbury on supply and demand issues brought on by new lockdowns around the world, as well as government spending bills.

U.S. consumers have done an about-face and are as worried about the pandemic as they were over a year ago, during the dark days of lockdowns and COVID-19 daily briefings.

The University of Michigan Consumer Sentiment for August, which is considered one of the most current economic assessments, saw the largest drop in over a year in what was described by the surveyors as a “stunning loss of confidence” and has only been as negative two other times in history.

The reading dropped 13.5% from July to a level that was just below the April 2020-low of 71.8 when COVID-19 lockdowns and headlines dominated everyday life. The other time when things were as bad was during the 2008 Great Recession. 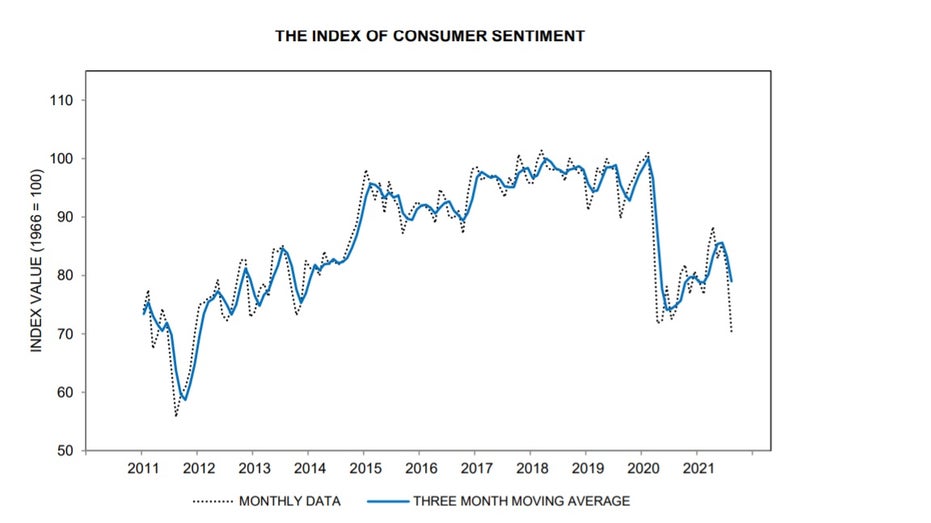 “Moreover, the losses covered all aspects of the economy, from personal finances to prospects for the economy, including inflation and unemployment. There is little doubt that the pandemic’s resurgence due to the Delta variant has been met with a mixture of reason and emotion” wrote Surveys of Consumers chief economist, Richard Curtin, who also noted Americans fear the economy’s performance will be “diminished” in the coming months.

“Lockdowns are the biggest threat to the economy” warned First Trust Advisors chief economist Brian Wesbury, during an appearance on FOX Business Network.

The down-in-the-dumps reading comes after two back-to-back inflation reports showed rising costs across the board. Annual gains Consumer Price Index gains in July saw the biggest jump since 2008 rising 5.4%, while the Producer Price Index jumped by 7.8%, the most on record.

AFTER MORE THAN $2 TRILLION SPENT BY THE US, AFGHANISTAN IS FALLING BACK TO THE TALIBAN

The concerns also come as vaccines remain available for free to all Americans and as usage gets expanded. The Centers for Disease Control and Prevention (CDC) advisory committee recommends moderate-to-severe immunocompromised individuals receive an mRNA COVID-19 booster dose.

The Advisory Committee on Immunization Practices held the vote Friday, a day after the Food and Drug Administration expanded emergency use of Pfizer-BioNTech and Moderna’s COVID-19 vaccines to authorize a booster shot for certain immunocompromised patients.

The reading surprised economists but did not spook investors. The broader stock market remains at record levels for the Dow Jones Industrial Average and the S&P 500.