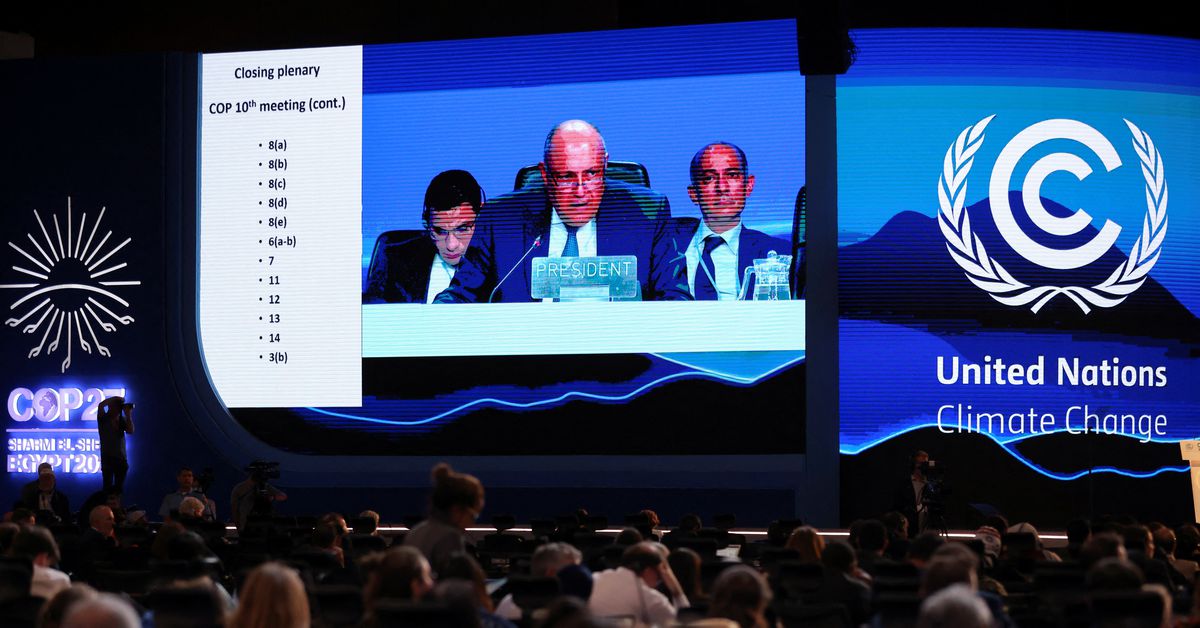 SHARM EL-SHEIKH, Egypt, Nov 20 (Reuters) – Countries closed this year’s U.N. climate summit on Sunday with a hard-fought deal to create a fund to help poor countries being battered by climate disasters, even as many lamented its lack of ambition in tackling the emissions causing them.

The deal was widely lauded as a triumph for responding to the devastating impact that global warming is already having on vulnerable countries. But many countries said they felt pressured to give up on tougher commitments for limiting global warming to 1.5 degrees Celsius in order for the landmark deal on the loss and damage fund to go through.

Delegates – worn out after intense, overnight negotiations – made no objections as Egypt’s COP27 President Sameh Shoukry rattled through the final agenda items and gavelled the deal through.

Despite having no agreement for a stronger commitment to the 1.5 C goal set in the 2015 Paris Agreement, “we went with what the agreement was here because we want to stand with the most vulnerable,” Germany’s climate secretary Jennifer Morgan, visibly shaken, told Reuters.

When asked by Reuters whether the goal of stronger climate-fighting ambition had been compromised for the deal, Mexico’s chief climate negotiator Camila Zepeda summed up the mood among exhausted negotiators.

“Probably. You take a win when you can.”

The deal for a loss and damage fund marked a diplomatic coup for small islands and other vulnerable nations in winning over the 27-nation European Union and the United States, which had long resisted the idea for fear that such a fund could open them to legal liability for historic emissions.

Those concerns were assuaged with language in the agreement calling for the funds to come from a variety of existing sources, including financial institutions, rather than relying on rich nations to pay in.

The climate envoy from the Marshall Islands said she was “worn out” but happy with the fund’s approval. “So many people all this week told us we wouldn’t get it,” Kathy Jetnil-Kijiner said. “So glad they were wrong.”

But it likely will be several years before the fund exists, with the agreement setting out only a roadmap for resolving lingering questions including who would oversee the fun, how the money would be dispersed – and to whom.

U.S. special climate envoy John Kerry, who was not at the weekend negotiations in person after testing positive for COVID-19, on Sunday welcomed the deal to “establish arrangements to respond to the devastating impact of climate change on vulnerable communities around the world.”

In a statement, he said he would continue to press major emitters like China to “significantly enhance their ambition” in keeping the 1.5 C goal alive.

The price paid for a deal on the loss and damage fund was most evident in the language around emission reductions and reducing the use of polluting fossil fuels – known in the parlance of U.N. climate negotiations as “mitigation.”

Last year’s COP26 summit in Glasgow, Scotland, had focused on a theme of keeping the 1.5C goal alive – as scientists warn that warming beyond that threshold would see climate change spiral to extremes.

Countries were asked then to update their national climate targets before this year’s Egypt summit. Only a fraction of the nearly 200 parties did so.

While praising the loss and damage deal, many countries decried COP27’s failure to push mitigation further and said some countries were trying to roll back commitments made in the Glasgow Climate Pact.

“We had to fight relentlessly to hold the line of Glasgow,” a visibly frustrated Alok Sharma, architect of the Glasgow deal, told the summit.

He listed off a number of ambition-boosting measures that were stymied in the negotiations for the final COP27 deal in Egypt: “Emissions peaking before 2025 as the science tells us is necessary? Not in this text. Clear follow-through on the phase down of coal? Not in this text. A clear commitment to phase out all fossil fuels? Not in this text.”

On fossil fuels, the COP27 deal text largely repeats wording from Glasgow, calling up parties to accelerate “efforts towards the phasedown of unabated coal power and phase-out of inefficient fossil fuel subsidies.”

Efforts to include a commitment to phase out, or at least phase down, all fossil fuels were thwarted.

Critics pointed to a section which they said undermined the Glasgow commitment to regularly renew emissions targets – with language saying the work programme would “not impose new targets or goals”. Another section of the COP27 deal dropped the idea of annual target renewal in favour of returning to a longer five-year cycle set out in the Paris pact.

“It is more than frustrating to see overdue steps on mitigation and the phase-out of fossil energies being stonewalled by a number of large emitters and oil producers,” German Foreign Minister Annalena Baerbock said.

The deal also included a reference to “low-emissions energy,” raising concern among some that it opened the door to the growing use of natural gas – a fossil fuel that leads to both carbon dioxide and methane emissions.

“It does not break with Glasgow completely, but it doesn’t raise ambition at all,” Norway’s Climate Minister Espen Barth Eide told reporters.

The climate minister of the Maldives, which faces future inundation from climate-driven sea level rise, lamented the lack of ambition on curbing emissions.

“I recognise the progress we made in COP27” with the loss and damage fund, Aminath Shauna told the plenary. But “we have failed on mitigation … We have to ensure that we increase ambition to peak emissions by 2025. We have to phase out fossil fuel.”