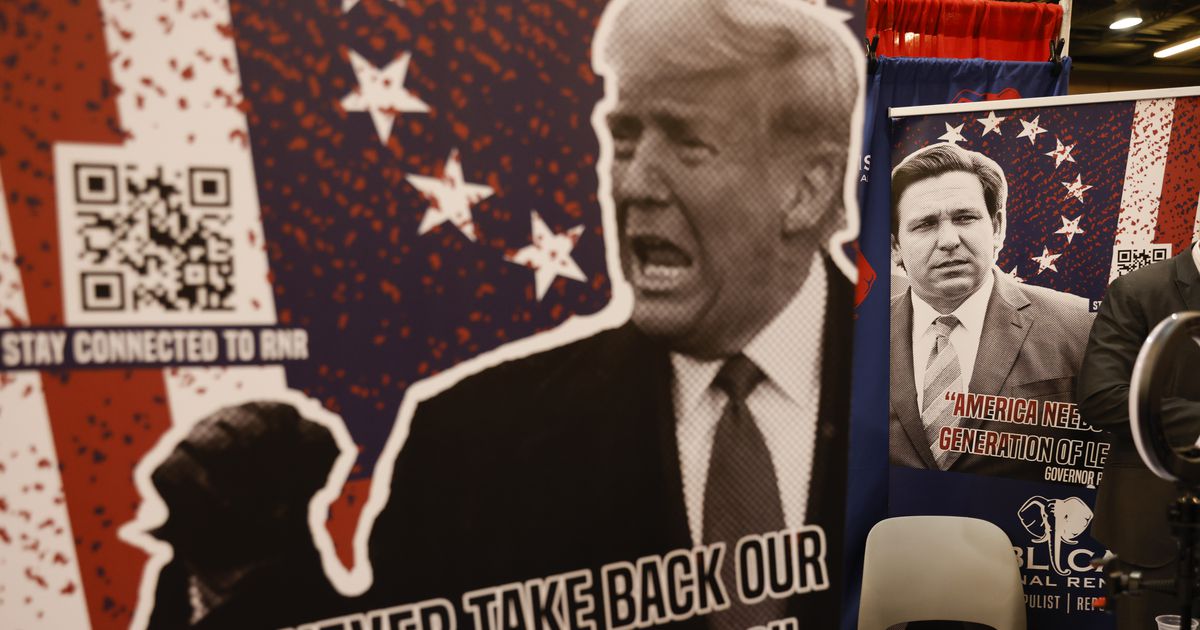 The Conservative Political Action Conference is still very much a Donald Trump-dominated event, but ears perked up anytime another name was mentioned during the three-day event in Dallas.

Though Florida Gov. Ron DeSantis is not at CPAC, he is still omnipresent, with his name stitched on hats and T-shirts and drawing a raucous reaction whenever he’s mentioned onstage. He is widely considered the leader of the post-Trump conservative movement and a potential 2024 presidential candidate.

Ahead of Trump’s headlining speech Saturday, most CPAC attendees said they believe the Republican Party is DeSantis’ to inherit, but not until the former president steps aside.

Still, in the absence of a 2024 announcement from Trump, some at CPAC said the passing of the torch should happen sooner rather than later.

Carol Cook of Allen called herself a “DeSantis girl” and said she appreciated his fight against “woke” corporations and his handling of COVID-19 in Florida, including his stance against vaccine mandates.

“I loved Trump’s policies,” said Cook, 53. “But DeSantis is less abrasive, and his personality is less divisive.”

Her husband, Kenneth Cook, said he would prefer Trump, but admitted DeSantis has less political baggage.

“I like what [Trump] did when he was in office, but the problem is it’s almost too easy for the Democrats to serve him up on a platter again,” he said. “I think DeSantis would be more likely to get across the finish line easier.”

Dale Delatte, a 65-year-old from Dallas, agreed: “The hate for Trump is so deep that maybe it wouldn’t be a good thing if he ran. But then maybe if DeSantis ran, they would just pretend it’s Trump and hate him as much they hated Trump.”

DeSantis has avoided questions about his 2024 aspirations, but he has also subtly set himself apart from Trump. Earlier this year, DeSantis said he regretted not speaking out “much louder” against Trump’s recommendation that people stay home in the early days of the COVID-19 pandemic. He’s also avoided asking for Trump’s endorsement for his reelection campaign this year, according to Politico.

In the exhibit hall of the Hilton Anatole, CPAC vendors hawked DeSantis gear alongside Trump gear. One group set up two banners, one featuring Trump, one DeSantis.

The majority of CPAC attendees, though, said DeSantis needs to wait his turn.

“Nobody wants to see Trump and DeSantis making each other look bad,” said Josh Caesar, a 56-year-old from McKinney. “I know some people are tired of Trump and want new blood, but realistically, Donald Trump owns the party. If he runs, nobody’s going to stand in the way, and DeSantis surely will not if he knows what’s good for his career.”

Kenneth Argo of Dallas said he “loved DeSantis,” but added that DeSantis even toying with the idea of a 2024 run is disloyal to Trump.

“It would be suicide,” said Argo, 70. “I would be very upset with DeSantis and it would cause me to be a no vote for him in a future election.”

The two Texas Republicans with presidential aspirations, Sen. Ted Cruz and Gov. Greg Abbott, fared poorly in the CPAC straw poll. Cruz got 2% of the vote, while both Abbott and Rep. Liz Cheney didn’t register beyond 0%. Former Vice President Mike Pence, whom Trump and his base heavily criticized for certifying President Joe Biden’s 2020 election victory on Jan. 6, scored higher than Abbott.

At CPAC, Ted Cruz says China shooting down Pelosi’s plane would be ‘an act of war’