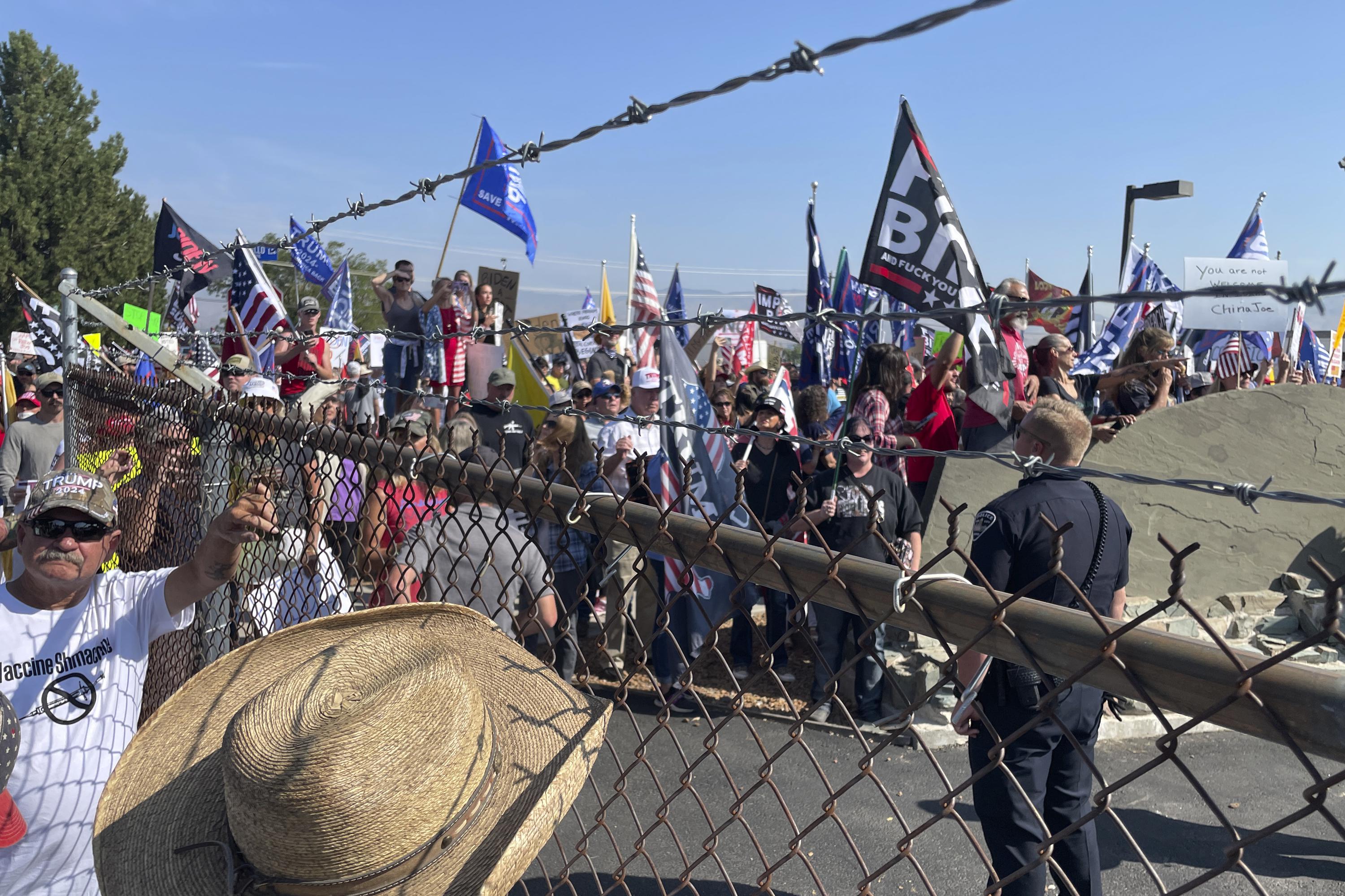 BOISE, Idaho (AP) — More than 1,000 protesters gathered Monday in Boise during a visit by President Joe Biden to rail against his plan to bring the coronavirus pandemic under control, last year’s presidential election and a host of other issues.

Biden visited Boise as part of a swing through three Western states to promote his administration’s use of a wartime law to aid in wildfire preparedness, survey wildfire damage and push his economic agenda. He arrived at the National Interagency Fire Center in Boise late Monday morning to meet with fire officials and Idaho Gov. Brad Little, a Republican.

Lisa Mitchell, 65, of Middleton, Idaho, said she showed up to demonstrate because she doesn’t believe the 2020 election was valid and thinks former President Donald Trump actually won.

“I’m here to support Trump and stand for freedom,” said Mitchell, who was wearing a “Trump won 2020” sticker.

Biden, Mitchell added, is “is in there illegally.”

Though some of former President Donald Trump’s most fervent supporters believe his continued claims that the presidential election was stolen, there is no evidence of widespread fraud and Republican and Democratic election officials certified the election as valid. Courts have also repeatedly rejected lawsuits claiming the election was tainted.

About a half-dozen Boise police officers were stationed at the entrance to the National Interagency Fire Center and other law enforcement officers patrolled the area on motorcycles. The complex that houses the center is generally closed to the public and the protesters gathered outside its entrance.

Many protesters carried expletive-laden signs or waved U.S. flags hung upside down as a signal of distress.

Biden was also scheduled to visit Sacramento, California, and Denver during the two-day trip and will campaign in California for Democratic Gov. Gavin Newsom, who faces a recall election on Tuesday.

Wildfire activity has been growing increasingly extreme across the West. Scientists say climate change has made the region much warmer and drier in recent decades and that it will continue to make wildfires and weather more extreme and destructive.

Among the demonstrators was Chris Burns, of Boise, who said he attended the protest because “I’m against everything Biden is for.”

The vaccine requirement says that all employers with more than 100 workers must require them to be vaccinated or test workers for the virus weekly. Workers at health facilities that receive federal Medicare or Medicaid will also have to be fully vaccinated, as well as employees of the executive branch and contractors who do business with the federal government.

“He’s acting like a dictator,” Burns said of Biden.

Idaho has one of the lowest vaccination rates in the United States and the state’s health care system is in danger of buckling as the delta variant sends COVID-19 case numbers skyrocketing.

One in every 210 Idaho residents tested positive for COVID-19 within the past week, and the average number of daily new cases has increased by nearly 70% in the past two weeks.

Idaho reached a record high with 613 patients hospitalized with COVID-19 on Wednesday, according to the most recent numbers available from the Idaho Department of Health and Welfare.

Last week, state officials gave hospitals in northern Idaho permission to operate under “crisis standards of care,” a health care rationing measure intended to ensure that scarce resources such as hospital beds are first given to those most likely to benefit from treatment or survive.

But opposition to wearing masks, social distancing and getting vaccinated remains high across the conservative and overwhelmingly Republican state.

“I don’t think anybody should be forced to put something in their body,” said Michelle Ballon, of Caldwell, as she held a sign saying that forced vaccines are “medical rape.”

Several far-right groups leveraged Biden’s trip as a way to show their opposition to his administration.

Among them was the far-right Idaho Liberty Dogs, whose members frequently protest events heavily armed while wearing militia-style clothing. The group had promoted an “Unwelcoming of Joe Biden in Boise” protest. Miste Gardner-Karlfeldt, the director of the anti-vaccine group Health Freedom Idaho, also urged followers to protest Biden’s arrival.

And Dan McKnight, a military veteran and founder of “Bring Our Troops Home,” an organization that advocated for the end of the war in Afghanistan, promoted a protest called “Biden Killed Americans.”

Several of Idaho’s GOP gubernatorial candidates also seized on Biden’s trip as a way to try to distinguish themselves in the crowded field.

Ed Humphreys, a GOP gubernatorial candidate who has made fighting against vaccine mandates part of his campaign, announced last week that he would host a “Traitor Joe is not welcome in Idaho rally.”

Idaho Lt. Gov. Janice McGeachin, who is also running for governor and has argued against masking rules and other efforts to slow the spread of coronavirus, called on Little, the governor, to “uninvite” the president.

Little also announced last week that he was working with the state’s attorney general to fight Biden’s vaccine mandate through the legal system.

During the briefing inside the National Interagency Fire Center, Biden said global warming is a serious problem and told wildland firefighters that the nation owed it to them to ensure they have the equipment they need for firefighting.

Biden also talked about raising wages for federal firefighters and other strategies to deal with wildfires.

Little said the group should address what federal and other partners can do to build a more resilient ecosystem and to prevent dangers that firefighters face.

Biden said that he once applied for a job at the Idaho-based Boise Cascade forest products company because he and his late first wife Neilia wanted to move to Idaho.

This story has been updated to correct the slogan on a sticker worn by Lisa Mitchell. The sticker says, “Trump won 2020,” not “Trump Women 2020.”