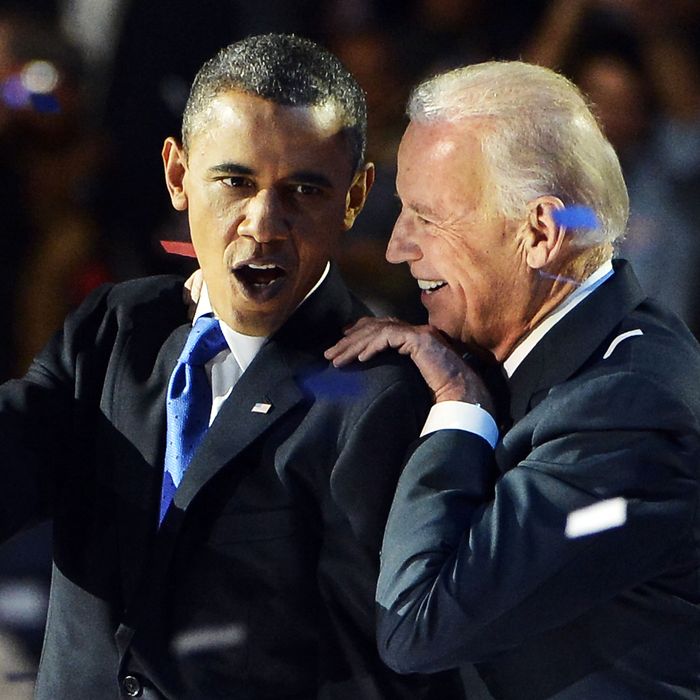 Barack Obama and Joe Biden on Election Night in 2012, after they overcame a terrible midterm. Photo: Brian Kersey/UPI/Shutterstock

The 2022 midterms don’t look great for Democrats, who will be trying to buck history by hanging on to super-slim congressional majorities. Thanks to the particular lay of the land in the seats that happen to be up next year, Democrats have a decent chance of maintaining control of the Senate. But the House? Not so much: The two times since the New Deal when the president’s party won net House seats in a midterm (1998 and 2002), the president in question had sky-high job-approval ratings. Even if you believe Joe Biden’s plunge in popularity has been stemmed or even turned around a bit, he’s not going to have 60 percent-plus approval in November 2022 unless really crazy things happen. There’s just too much partisan polarization for that these days.

Thankfully for Democrats, even if they lose their congressional majorities next year, Biden himself won’t be an underdog for reelection in 2024. After all, the last two Democratic presidents were reelected after historically terrible midterms. Democrats lost 54 U.S. House seats in 1994 and 63 in 2010. Yes, they had bigger majorities going into those elections than Democrats have now. But they lost the national House popular vote by an identical 6.8 percent in both midterms, which is pretty bad, particularly since Democrats suffer from a voter-inefficiency problem in House elections (too many voters concentrated in too few districts).

It’s possible for a president’s party to lose a midterm so badly that bouncing back in the next cycle is all but impossible. Consider the man whose unique comeback accomplishment Donald Trump will be emulating if he runs in 2024, Grover Cleveland. The president Cleveland defeated in an 1892 rematch, Benjamin Harrison, was a Republican whose party lost an incredible 93 House seats in the 1890 midterms. This, mind you, was at a time when the House had only 332 members, which means the GOP lost over half their caucus in one cycle (an even worse percentage than in 1894, when Democrats lost a record 125 House seats during the midterm after Cleveland’s comeback triumph). In this era of polarization, nothing like that is going to happen to Democrats in 2022.

Looking more broadly at the power of incumbency, there have been 13 sitting presidents since World War II who were on the general election ballot. Nine of them won. The four losers all faced special circumstances. Gerald Ford had not previously been elected to anything more than the U.S. House; he ascended to the vice-presidency and then the presidency when disgraced predecessors resigned, and he pardoned the president who appointed him, the especially disgraced Richard Nixon. Jimmy Carter was caught up in a historical realignment that he had held off four years earlier by carrying his native South, which then resumed a massive Republican trend. George H.W. Bush suffered from a terrible economy but then also a party split (third-party candidate Ross Perot won a lot of previously Republican voters). And we all know about Donald J. Trump, who was impeached twice and seemed determined to offend swing voters.

In retrospect, what’s most remarkable is that Ford and Trump very nearly got reelected despite their handicaps, exhibiting not the weakness but the strength of incumbency. And it’s with that perspective that any early handicapping of a potential 2024 rematch should be considered. Trump benefited from incumbency in 2020, as will Biden in 2024. So the idea that the 45th president has some built-in advantage over the 46th — absent the renewed election coup so many of us fear — doesn’t make a lot of sense.

Daily news about the politics, business, and technology shaping our world.
By submitting your email, you agree to our Terms and Privacy Notice and to receive email correspondence from us.