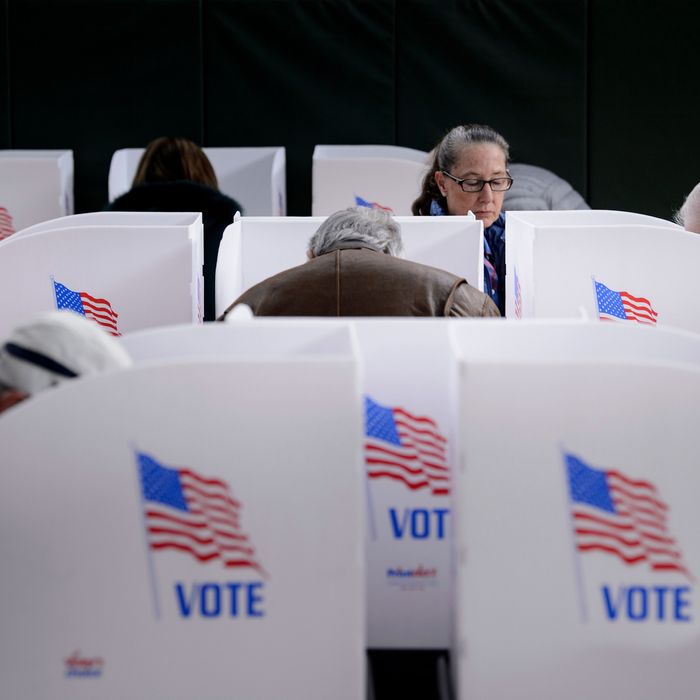 When voters vote in 2022, will they be thinking about Joe Biden, or something else? Photo: Brendan Smialowski/AFP via Getty Images

The signs are not good for Democrats hoping to hang onto their current Washington trifecta in the 2022 midterms. Actually, midterm prospects are never good for parties controlling the White House, unless the president involved has very high job-approval ratings (like Bill Clinton in 1998 and George W. Bush in 2002) and/or something weird is going on (like a gratuitous Republican impeachment effort in 1998 and the aftermath of 9/11 in 2002). By definition, you never know when something strange is on the horizon, but the trajectory of Joe Biden’s job-approval ratings, and the “cap” placed on them by partisan polarization, suggest it is very unlikely he’ll roll into 2022 on a wave of adulation. As Amy Walter has pointed out, Biden’s job-approval ratio is not only underwater now: The ratio between strong approval and strong disapproval is especially upside down; if translated to enthusiasm levels for the midterms, that’s deadly, given the tiny margin of Democratic control in the House, where every seat is up in the midterms.

It might be smart for Democrats to stop worrying about the impossible task of holding on to their trifecta and instead just focus on accomplishing as much of Biden’s agenda as they can cram through Congress on party-line votes. In fact, they have a decent chance to hold onto the Senate, given the particular seats up in 2022, and that has considerable value in terms of Biden’s ability to get executive and judicial nominees confirmed. But you cannot expect Nancy Pelosi to hand over the Speaker’s gavel to her despised Golden State rival Kevin McCarthy without a fight, so Democrats need a midterm message that transcends Biden’s accomplishments or agenda.

That means changing (or at least trying to change) the subject to make the midterms less of the usual referendum on the sitting president’s job performance. What are the options for a big distraction? Let’s go through them:

Democrats could run against Trump

One obvious option is to do what worked to energize Democratic voters and persuade swing voters in 2018 and 2020: Help the narcissistic 45th president keep himself at the center of attention. Indeed, as the contrast between the results in 2018 and 2020 showed, 2022 could replicate the situation where Trump is on the minds of voters who fear him but not on an actual ballot where voters who love him will feel compelled to go to the polls to express their affection (you saw the same phenomenon with Obama supporters in the 2010 and 2014 midterms where their president was not on the ballot).

Without question, Gavin Newsom’s likely-to-be-successful campaign to beat a recall effort has been heavily focused on tying recall sponsors and Republican replacement candidates to the more lurid and ongoing of Trump’s misdeeds, particularly the January 6 insurrection. And it’s looking like Democratic turnout for the recall election (which ends on September 14) will be robust despite earlier fears to the contrary.

How much of a Newsom win would be attributable to anti-Trump messaging is hard to say, just as it’s hard to say whether the fears the MAGA folk aroused on January 6 and in subsequent Big Lie activities like post-election “audits” will remain powerful right through the midterms. Any plans to deploy an anti-Trump message, moreover, will have to deal with the powerful undertow of sentiment among Democrats that the man will go away if they just refuse to talk about him any longer.

That’s why the effectiveness of a loud anti-Trump midterm effort may depend on how close he is to announcing or renouncing a potential 2024 comeback bid, and how visible and successful he is in 2022 primaries and other tests of his grip on the GOP. At a minimum, it’s clear progressives and the news media should not underestimate Trump a third time, or pass up opportunities to profit on the special loathing he arouses in the Democratic base and many swing voters as well. Running against Kevin McCarthy or Mitch McConnell while ignoring Trump may simply enhance the impression that the worst is over.

Democrats could run against threats to constitutional rights

Two big state-driven political trends in 2021 offer Democrats another ripe target that has the additional advantage of offering a unified message relevant to candidates at both the federal and state levels: going after GOP attacks on voting rights and reproductive rights. These are clearly base-energizing topics with significant swing-voter appeal, and can help supplement the depiction of Republicans as right-wing radicals with or without Trump’s leadership. There is also almost zero chance Republicans will undercut such a message by abandoning their commitment to voter suppression (a key component of their long-term strategy for surviving demographic change) or to the anti-abortion cause (central to the partnership of the GOP with its cultural conservative base).

It’s unclear if the timing will be right for a focus on these GOP threats in the midterms. Perhaps the 2021 voter-suppression wave will abate in Republican-controlled state legislatures next year, and the U.S. Supreme Court will hold off on undermining or even abolishing the right to choose an abortion. At present, though, it’s a decent bet that the iffy legal situation in Texas will keep pro-choice Americans fearful up to the time the Court is considering a frontal assault on abortion rights in Dobbs v. Jackson Women’s Health Organization. If as expected the hammer falls down on the right to choose in a June decision, it won’t be hard for Democrats to make this a midterm election issue from the top to the bottom of the ballot, with Republicans trying to change the subject while counter-mobilizing their own anti-abortion base. Abortion policy could be a big deal in 2022.

Democrats could run against anti-vaxxers

As Ron Brownstein points out, this approach takes advantage of the growing anger of vaccinated Americans — especially very highly vaccinated seniors, who also tend to vote in higher proportions in non-presidential elections than younger people — against those resisting vaccination and the politicians who defend them. This theme will most definitely be central to Democratic messaging in key states like Florida, Georgia, and Texas, where incumbent Republican governors have in varying degrees aligned themselves with anti-vaxxers to the peril of others (including, most recently, school children). But if it can work in California, it can work in other blue and purple states as well.

The big problem, of course, is our inability to know where we will be with COVID-19 in November of 2022, or even a few months earlier when the midterm campaign is in full swing. At this early point, the best thing about abrasively attacking anti-vaxxers is that it could do some good in the real world of public health, which in turn could help Biden and Democrats generally.

Democrats could run against Republican obstruction

A much more traditional midterm approach for the party holding power in Washington would be to single out the party proposals that poll the best with the public or with key target constituencies, and then campaign like hell against the obstructionists in the other party who are denying (or who have tried to deny) these goodies to the American people. This time-tested strategy has the advantage of being party-unifying, while also — if it’s effectively deployed — lifting the president’s job-approval rating as well by identifying him with the most popular stuff in his agenda.

Trouble is, public perceptions of what the president and his party are trying to do are baked into his job-approval ratings already, and may be difficult to change given counter-messaging from the other side and from media outlets across the political spectrum. And as Democrats have come to understand over the years, even if voters really like an array of their policy initiatives taken in isolation, many of the same voters may fear they add up to “socialism,” or “too much spending,” or “too much spending on people other than us.”

In the end, Democratic midterm messaging will likely depend on what the party is most seriously trying to achieve: an against-the-odds House victory, or a win in selected Senate races, or victories in key state races, or mere damage mitigation. The worst approach would be to mix it all up or vacillate in order to appease everyone. So the time for donkeys to choose is growing near.

Daily news about the politics, business, and technology shaping our world.
By submitting your email, you agree to our Terms and Privacy Notice and to receive email correspondence from us.

Now what? Texas Democrats have a very hard choice to make - CNN
How Trump blew his chance to steal the election: The clock was ticking; he was tweeting - Salon
Council closes in on charter amendments | News | normantranscript.com - Norman Transcript