President Biden won’t be on the ballot next year in Florida, as Republican Gov. Ron DeSantis runs for a second four-year term steering the Sunshine State.

But DeSantis sure made it sound like he was running against the president as he addressed a conservative crowd at a political fundraising event in Nebraska City, Nebraska, which is just across the Missouri River from Iowa, the state whose caucuses for half a century have kicked off the presidential nominating calendar.

DeSantis, whom political pundits see as a potential 2024 Republican presidential candidate despite his denials, used his speech to criticize the president over his handling of the rocky U.S. withdrawal and evacuation from Afghanistan and Biden’s executive order last week mandating COVID vaccines for up to 100 million American workers.

DeSantis – a conservative congressman who was narrowly elected Florida governor in 2018 with support from then-President Trump – saw his popularity surge among Republican voters in his state and around the nation over the past year and a half, thanks in large part to his combative pushback against COVID restrictions amid the coronavirus pandemic. And that’s fueled speculation about likely national ambitions, as the governor’s support has jumped among Republicans in early 2024 polls.

DeSantis, a vocal critic of the Democratic president, has traded verbal fire this summer with Biden over the coronavirus, the worst pandemic to strike the globe in a century. The back-and-forth was ignited early last month when the president, making a plea to Americans to get vaccinated, targeted DeSantis and Texas Gov. Greg Abbott of Texas without naming them.

“I say to these governors: Please help,” Biden said. “But if you aren’t going to help, at least get out of the way.”

DeSantis, in his speech on Sunday, argued that Biden “obsesses” over Florida and the governor’s handling of the COVID crisis.

“If you watch Biden, he always has to talk about Florida loves talking about things that we’re doing down there,” DeSantis charged. “If he spent a little less time talking about Florida and more time doing his job as commander in chief, we might not have 13 service members who were killed in action in Afghanistan because of his ineptitude and dereliction of duty.”

DESANTIS ATTACKS ON BIDEN INFLATE HIS STANDING AMONG REPUBLICANS NATIONWIDE

The governor claimed that the president “is so mad that in the state of Florida, we protect the rights of parents to be able to send their kindergartners to school without having to wear a mask for eight hours a day. That is something that he thinks is such a bad thing. But I think I understand why he is so concerned about Florida, because we’re leading on the issues that matter and we represent a brick wall when it comes to Biden’s agenda.” 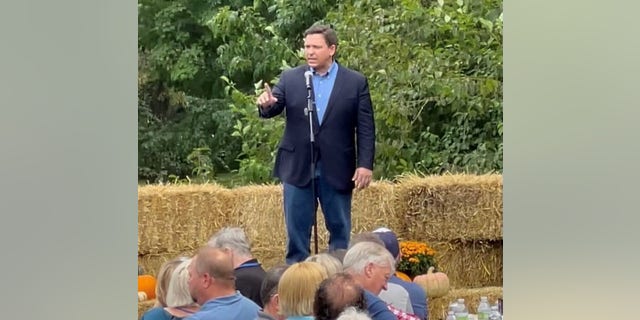 DeSantis didn’t bring up his own reelection campaign. But looking ahead to next year’s midterm elections, when Republicans aim to win back majorities in the House of Representatives and the Senate, DeSantis predicted “we’re going to do very well in 2022. Thank you, Biden, for being such a lousy president, waking up half of America.”

Amid heavy criticism from Republicans and even some Democrats over the Afghanistan exit, the surge in COVID cases this summer due to the highly infectious delta variant, and a rise in consumer prices, the president’s seen his standing among Americans take a tumble, with his approval ratings in national polls now under water. But the latest surveys in Florida also indicate that the soaring cases of COVID in the Sunshine State have also taken a bite out of DeSantis’ approval ratings.

The stop by DeSantis in Nebraska City was as close as he’s come to visiting Iowa, New Hampshire, South Carolina, or Nevada, the first four states to hold primaries or caucuses in the GOP presidential nominating calendar. A political trip to Nevada last month was cancelled as a tropical storm bared down on Florida.

Last week DeSantis pushed back against talk that he was looking ahead to 2024.

“All the speculation about me is purely manufactured,” DeSantis charged during a press conference Tuesday in St. Cloud, Fla. “I just do my job and we work hard… I hear all this stuff and honestly it’s nonsense.”

But DeSantis has made at least a dozen stops across the country this year as part of his highly successful 2022 fundraising push, all the way from Southern California on the west coast to New Jersey in the northeast. He also took a high profile trip to the U.S.-Mexico border in Texas, as he teamed up with Abbott to slam Biden’s immigration actions.

DeSantis was joined by former Vice President Mike Pence and Sen. Ted Cruz of Texas, two other potential White House hopefuls in the next presidential race, in headlining the Steak Fry, an outdoor event that attracted some 1,200 people. Early polls suggest that if Trump doesn’t follow through with his flirtations and launch a third presidential campaign, DeSantis, Pence, and Cruz would be the frontrunners in the fight for the Republican nomination.