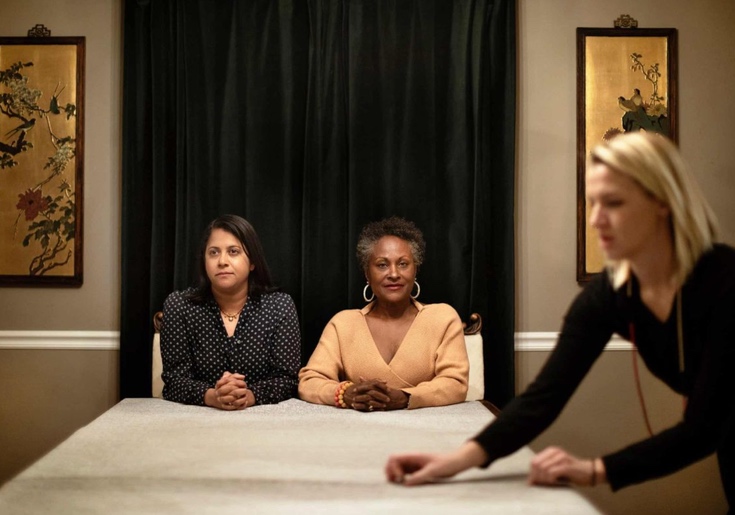 Is there any force more powerful in America today than white guilt? That is the question that springs to mind reading Regina Jackson and Saira Rao’s new book, White Women: Everything You Already Know about Your Own Racism and How to Do Better. Jackson and Rao, who get invited and paid to ruin perfectly lovely dinner parties by lecturing attendees about their “complicity in upholding white supremacy,” have found the white guilt—the soft spot in the skull of earnest liberals—and just keep poking their thumbs into it.

Jackson and Rao are the founders of an organization called Race2Dinner. For $5,000 the two women will attend your eight-person dinner party and bring along “Lisa Bond, our Resident White Woman.” For that price, they will berate you about your racism. They will share their own experiences with racism, which sometimes don’t sound like actual racism. But if you object or even if you agree, they will tell you that’s what white women do and you’re part of the problem. The two have a lot of observations about “what white women do.” White women are mean to each other, for instance. When they are accused of racism white women accuse black women of being “angry” or “crazy.” White women also say they’re not racist. White women like dinner parties. And they like to say they’ve donated money to the ACLU. If you suggest that black women may be mean to each other or that they may like dinner parties, you’re also a white supremacist. Because how would you know? Don’t say you have black friends because that too would be a sign of white supremacy.

Questioning whether spending $5,000 to have people call you names is also “white supremacy,” and the authors explain, “we are tired of it.” The fact that you are complaining about the price is evidence that you “see this work as charity. You doing us a favor. … White supremacy culture has you believing that you are doing us a favor by even caring about racism or antiracism. This results in your incessant demands that we educate you—on your own racism, on a system you created to harm us for your benefit. For free.”

Too often, the authors explain, black and brown women have “provided free labor for you.” It used to be slavery but now they are brought into boardrooms to discuss diversity, “tagged in Facebook conversations where white women are ‘listening and learning.’” And that’s basically just a different kind of slavery. But Rao and Jackson have had enough. They are no longer going to criticize you for free. They are going to be the McKinsey of diversity training. Only instead of coming to your workplace, they are going to partake of your red-pepper hummus and Pinot Grigio and lecture your friends in the privacy of your Restoration Hardware dining room.

But the money barely pays for the horrors that these two women have to endure. “We decided to write this book after more than a dozen dinners. Different White women, different dining rooms, different cities. SAME CONVERSATION. You are nothing if not consistently WHITE.” Just suffering the tedium of the dialogues. I mean they are clearly not getting paid enough.

In that sense, I’m probably more sympathetic than I should be. I can’t imagine having to spend two hours with the kind of women who would pay these grifters. There is not enough wine in France to get me through all that virtue-signaling. Look at us. We have a “Hate Has No Home Here” sign; we posted pictures of our kids holding up Black Lives Matter signs on the school Facebook page. No matter what they say it will not satisfy Rao and Jackson because if it were enough then they’d be out of work.

The other reason they need to be well-compensated is because this work is dangerous. While the white women are “feverishly getting lunches ready and kids off to school, know that we are doing the same plus hoping one of the many white folks who have threatened to commit bodily harm to us and our families is not hiding in a bush outside, ready to shoot our kids and grandkids.” Really Rao and Jackson are more like Navy SEALs than diversity consultants. Come on, though. I mean I get that they’re spoiling a lot of perfectly nice evenings for busy moms, but hiding in a bush with a shotgun? These people have pickleball matches to get to—who has the time for that kind of revenge?

Perhaps the most devastating part of Rao and Jackson’s critique for the attendees at Race2Dinners is the fact that their feminism is apparently part of the problem. “One of the reasons white feminism is so insidious—and why white feminists might more often claim colorblindness (compared with white women who don’t necessarily care about feminism)—is that white feminists like to think they live in a fantasy where ever women [sic] is equally oppressed. You like to believe you are fighting for the rights and well-being of all women, and want to consider all women as equitable in that fight. … Saying you are colorblind helps support your myth of equitability.”

This is the kind of logic that will be devastating to anyone who owns a pussy hat. And Chelsea Handler, who blurbed the book, just cannot get enough of this flagellation. “I am always looking for ways to learn, grow, shut the F up and listen,” she writes. Anyone who has watched one of the crudest and least funny women on television knows she is always looking for ways to learn and grow and listen.

But as everyone involved realizes or should, this is all part of an act. Rao and Jackson don’t really believe that all these women are racist or that attending Race2Dinners will make them any less racist. And the women attending these dinners don’t really believe they are racist either. And no one thinks Chelsea Handler can be made to shut the F up.

In an article for the Wall Street Journal a few years ago, Shelby Steele wrote: “White guilt is not actual guilt. Surely most whites are not assailed in the night by feelings of responsibility for America’s historical mistreatment of minorities.” Indeed, he explained, “White guilt is not angst over injustices suffered by others; it is the terror of being stigmatized with America’s old bigotries—racism, sexism, homophobia, and xenophobia. To be stigmatized as a fellow traveler with any of these bigotries is to be utterly stripped of moral authority and made into a pariah. The terror of this … pressures whites to act guiltily even when they feel no actual guilt. White guilt is a mock guilt, a pretense of real guilt, a shallow etiquette of empathy, pity, and regret.”

If the only effect of this guilt were rich liberal women wasting their money on this shallow etiquette, I would say, well that’s the free market at work. (And also there’s a sucker born every minute.) But unfortunately it’s not.

In what is perhaps the closest the authors come to grasping the real problems with what they are saying, Jackson tells the story of her son’s sixth grade teacher calling her to say “she could not get him to behave in class.” When Jackson asked her son why he was giving his teacher a hard time, he said, “because she lets me.” Jackson then explains, “From that point on I understood … white women educators have zero expectations of Black children. … What I know is that children live up to your expectations. If you expect nothing of them (as white teachers did), you will get nothing.”

After years of explaining to white people that anything black children do wrong is the result of racism, that racial disparities in school discipline are the result of racism, that black students underperforming on tests is the result of racism, what are white teachers supposed to do? Their hands are tied. Disciplining a black student is, of course, white supremacy. And no doubt Jackson’s “gifted” son has figured that out. Jackson concludes that “white teachers don’t care about me.” But the truth is that they care too much about you and what you will do to them and their reputations, and not enough about what your bigotry and shaming are doing to black people.

White Women: Everything You Already Know about Your Own Racism and How to Do Better
by Regina Jackson and Saira Rao
Penguin, 174 pp., $16

Naomi Schaefer Riley, a senior fellow at the American Enterprise Institute and the Independent Women’s Forum, is the author of No Way to Treat a Child: How the Foster Care System, Family Courts, and Racial Activists Are Wrecking Young Lives.