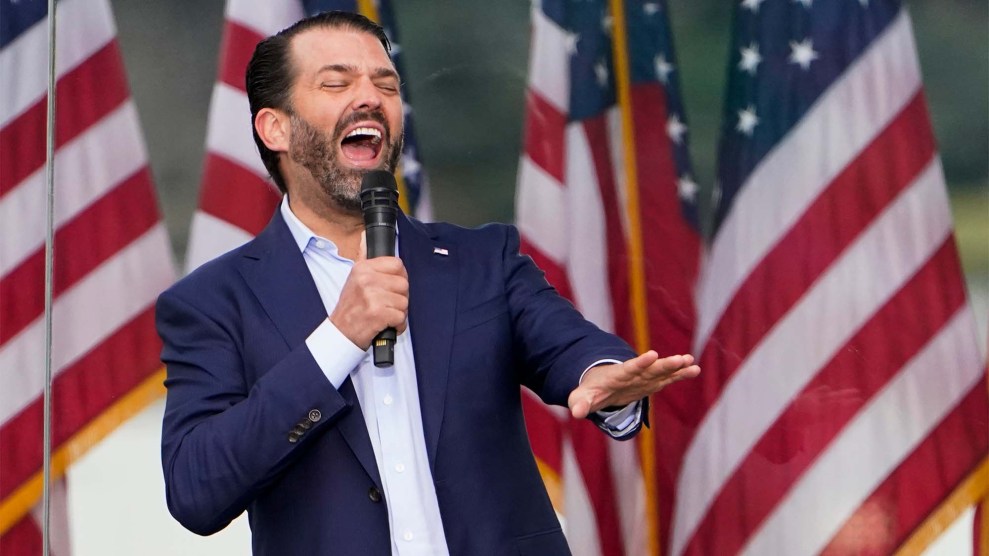 Not long after a jury acquitted Kyle Rittenhouse on all charges on Friday, Donald Trump Jr. chimed in with support for the teenager, who shot and killed two people and wounded another in Kenosha, Wisconsin, last year.

The verdict, which came after a tense trial in which Rittenhouse claimed self-defense, has been loudly praised among conservatives as a vindication for Second Amendment rights and criticized by many others, who worry it will embolden gun-toting men to take the law into their own hands.

Trump Jr. wasted no time following the verdict, going on Twitter to amplify a far-right gun group’s campaign to send Rittenhouse a free rifle as a sort of congratulatory award.

“Gun Owners of America is sending Kyle Rittenhouse an AR-15. Sign the card in support of Kyle,” Trump Jr. wrote in a since-deleted tweet, urging his 7.1 million followers to add their name to a virtual card showing their appreciation of Rittenhouse. The gun lobbying group had stated that the AR-15 was a “thank you” gift to Rittenhouse “for being a warrior for gun owners and self defense rights across the country!” In another tweet, Trump Jr. shared an article that referred to Rittenhouse as a “badass” for the “near flawless” way he handled his gun on the night he shot three people. “Worth the read,” Trump Jr. wrote.

Rittenhouse’s own defense attorney, Mark Richards, slammed Trump Jr. for backing such a publicity stunt. “He’s an idiot,” Richards told Insider. “I don’t have to expand on that because it speaks for itself.”

ALERT: GOA will be awarding Kyle Rittenhouse with an AR-15 for his defense of gun rights in America.

Join us in saying THANK YOU to Kyle Rittenhouse for being a warrior for gun owners and self defense rights across the country!

Many pro-Trump voices from the GOP rushed to praise and promote Rittenhouse. As my colleague Tom Philpott recently detailed, some Republican members of Congress, including Paul Gosar, Matt Gaetz and Madison Cawthorn, have excitedly offered Rittenhouse internships.

“There’s a lot of people trying to profit on this, and I don’t think people should,” Richards further commented about the politicians’ job offers. “They want to trade on his celebrity and I think it’s disgusting.”

Justice was served for #KyleRittenhouse and he is fully exonerated. As I said last year, obviously self-defense.

I will arm wrestle @mattgaetz to get dibs for Kyle as an intern. https://t.co/kon65IB1d9