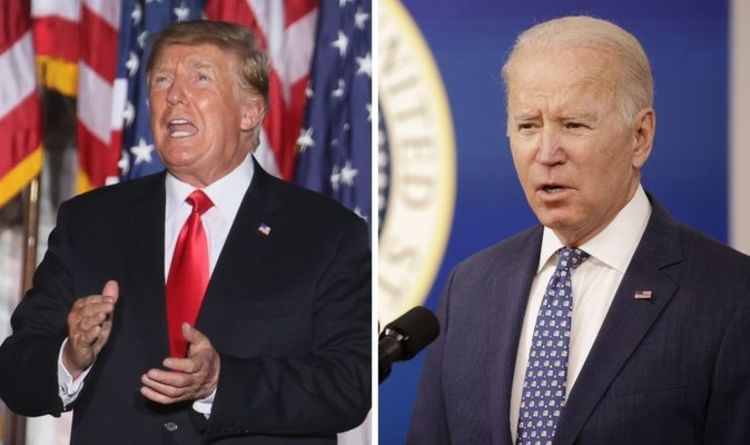 Since being ousted from the White House, Mr Trump has been touring the US and rallying his base with speeches promoting the groundless conspiracy theory that he was the rightful winner of last year’s election. Though the former President has not formally announced whether he will run in 2024, new polling data suggest Mr Trump would beat President Joe Biden and Vice President Kamala Harris. In the poll conducted by Redfield & Wilton Strategies, 44 percent of respondents said they’d vote for Mr Trump if he is a candidate.

In contrast, only 39 percent said they would vote for President Biden.

Mr Trump has continued to hint at another run for the presidency. Bill Grover, a US political scientist, told Express.co.uk the former president “showed every sign” that he would try to reclaim the White House.

Professor Grover, author of ‘The Unsustainable Presidency: Clinton, Bush, Obama and Beyond’, said: “We don’t know for sure but I think there are no signals that he’s not going to [run in 2024].

“When he spoke in Iowa [in October] it was notable that Chuck Grassley was there, Senator Grassley, who’s very, very senior.”

He claimed: “Grassley pretended to be an opponent of Trump when it came to the January 6 attack, and he was fully at Trump’s feet in Iowa.”

Prof Grassley believes this indicates “that even some of his opponents are coming to his side”, adding that “his fundraising is off the charts ‒ he shows every sign of being a candidate for sure.”

The former President’s previous spell in office ended in chaos when a mob of his supporters attacked the United States Capitol in Washington, DC in the hopes of disrupting the joint session of Congress and overturning Mr Trump’s election defeat.

“100 percent I’m thinking about running and we will, I think, be very successful.”

Professor Grover says the prospect of him winning the 2024 presidential election is a “critical danger” to democracy.

The academic claimed: “All the dangers, all the threats to democracy that we see already, would become manifest and would become more critical.

“I think that he would want to hurt his opponents, and I think that it would spell, not necessarily the end of democracy, but he’s an authoritarian leader.

“I think it would be a turn towards authoritarianism.”

Professor Grover added: “If he were to get re-elected it would certainly signal that the US is going in a more authoritarian direction.

“It would send a really damaging signal about the quality of democracy in the US.”