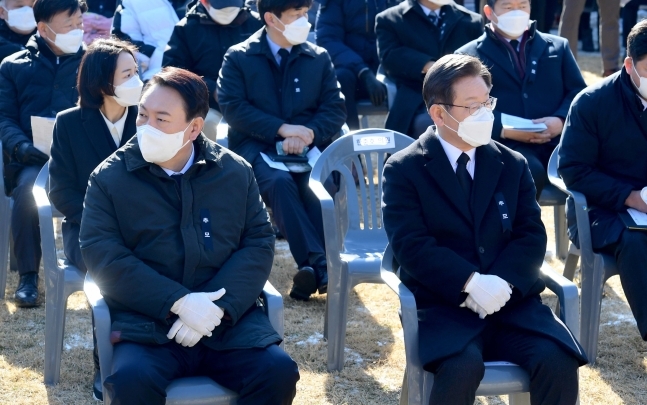 The race to decide the country’s next president is becoming a contest of scandals and accusations surrounding the candidates.

The political tit-for-tat following controversies have drowned out discussion on policy and state affairs, and voters are having second thoughts on who they should choose in the presidential election, slated for March.

“Since the presidential candidates from the major parties have been decided, fresh allegations of past wrongdoings of the candidates and their families are breaking out daily,” Lee, who wished to be identified only by his surname, told The Korea Herald on Thursday.

“Now, I am so disappointed by how unlawful the candidates are, and how they are handling the accusations. I have no trust in any of the candidates anymore and I am lost on who to choose.”

While the election is less than three months away, some are also expressing wishes for the parties to change their candidates, as the two-way race between Lee Jae-myung of the ruling Democratic Party of Korea and Yoon Suk-yeol of the main opposition People Power Party appears to revolve only around controversies related to their families.

According to a survey by local pollster Realmeter on Thursday, 1 out of 4 respondents said they have either already changed their choice of support, or are considering doing so due to the family issues.

In the poll commissioned by YTN conducted Monday and Tuesday, 16.1 percent of 1,027 respondents said they may change the candidate they support, as 8.9 percent said they have already changed their preference.

While the remaining 70.7 percent of respondents said they are maintaining their support for their first choice, they appear to be less than satisfied, as another questionnaire in the poll showed that over half of respondents view the apologies from the candidates over family controversies as “not enough.”

“Obviously we should be choosing a person who would be the best to lead the country. It is a sad reality that we have to choose for the lesser evil,” Hwangbo, 30, told The Korea Herald.

If it is possible, she would want the candidate from the People Power Party to be changed to someone else, such as Hong Joon-pyo, who was the runner-up in the party’s primary.

“It upsets me to think that I might have to give my ballot to Lee Jae-myung because I am so disappointed in Yoon Suk-yeol,” she added.

Lee Jae-myung, the presidential candidate from the ruling Democratic Party, has been plagued by a series of scandals related to his family.

Last week, Lee apologized after allegations were brought forward that his 29-year-old son had engaged in illegal gambling from January 2019 to July 2020 via online poker. He also denied allegations his elder son visited a massage parlor for sex.

Lee has also been taking flak for downplaying a case involving his nephew, who brutally killed two women in 2006. As an attorney, he provided the legal defense for his nephew and referred to mental illness in his defense.

Apart from his family, the ruling party candidate is also accused of unlawfully favoring his aides in a land development project that is currently being investigated by prosecutors for corruption.

The main opposition party has raised suspicions that Lee is the mastermind behind the Daejang-dong development scandal, as he was the mayor of Seongnam, Gyeonggi Province, at the time the project was carried out, and that he has close ties with key figures of the project.

Over the past weeks, two key officials who were managers of the project at the land development company have taken their own lives, after the probe kicked off.

Lee’s rival, Yoon Suk-yeol from the main opposition People Power Party, is also not free from controversies surrounding his family.

On Thursday, Yoon’s mother-in-law, surnamed Choi, was sentenced to one year in prison for forging a financial document used in a past deal for a land purchase.

According to Uijeongbu Regional District Court in Gyeonggi Province, Choi created a fake bank account balance certificate that showed she had a deposit of 34.7 billion won ($29.2 million) and used it to buy a plot of land in Seongnam in 2013.

Choi was also released on bail in September for a separate case, in which she was convicted of establishing a medical foundation and a long-term care hospital for seniors despite having no medical qualification.

Yoon’s wife, Kim Keon-hee, has been under attack for weeks for allegedly falsifying her credentials when applying for teaching jobs and for academic plagiarism.

Kim, who is also a head of a cultural content company, is mired in allegations of stock price manipulation related to used car dealer Deutsch Motors.

While mounting controversies concerning the presidential candidates are creating fatigue among voters, it is still not possible to change candidates unless they step down, Shin Yul, a politics professor at Myongji University, told The Korea Herald.

“There are no regulations or precedent, and it would create great confusion when the election is just a couple of months away.”