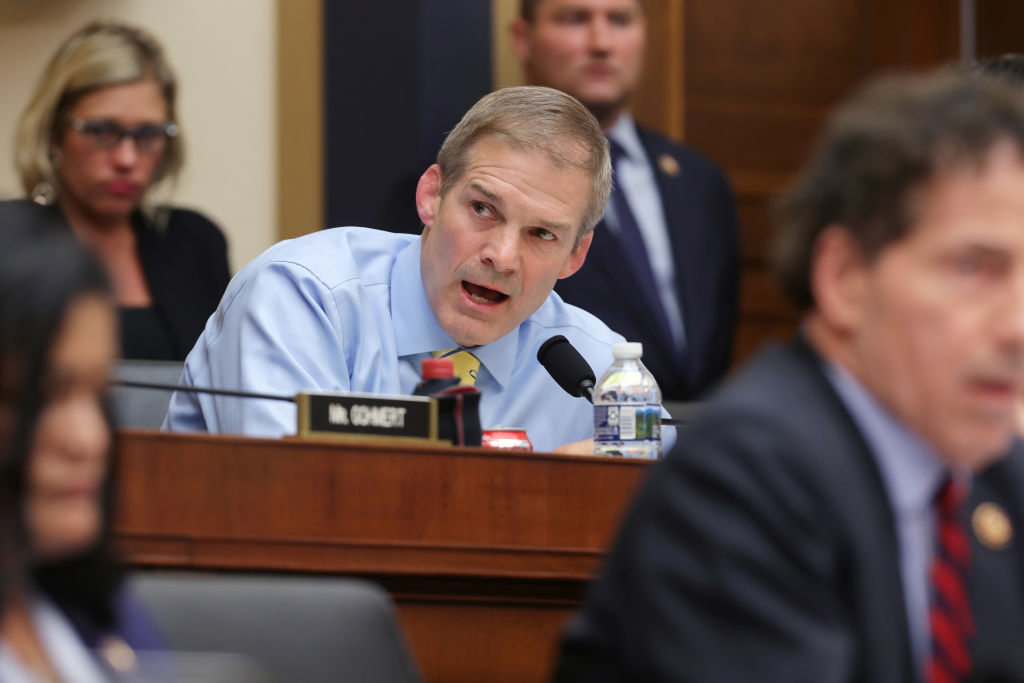 A crowd rose to its feet in applause at a forum last month when a man questioned GOP Congressman Jim Jordan about what he would do about the untrue assertion that the 2020 presidential election was stolen from Donald Trump.

Jordan was speaking at a December event hosted by the Lima Community for Medical Freedom and took questions from the crowd afterward. A man who did not share his name and identified himself as a tradesman and a Jordan voter said he wanted to ask about the “elephant in the room” that he hears about everyday “that no politician wants to talk about.”

Jordan, in his speech, had said restrictive voting laws passed in Georgia last year and similar efforts in other states would alleviate the threat of election fraud in 2024. The man in the crowd said the issue couldn’t wait.

“Everybody I talk to is not satisfied with 2024,” he said. “Everyone I talk to thinks our election was stolen.”

The crowd started to clap and rise in applause toward Jordan, who watched with a smile. He nodded along as the man said he and others saw “a couple of weeks’ worth of evidence” of fraud in swing states, according to footage of the event posted on social media.

“My understanding: If someone gets caught robbing a bank, they don’t get to keep the money, and if somebody stole the election, they should not be able to keep it,” the man said to the congressman.

There’s no evidence of widespread election fraud. Rare, isolated incidents occur, but an Associated Press review of every potential case of voter fraud in six battleground states disputed by Trump amounted to fewer than 475, far short of enough mass to tip an election. Numerous audits haven’t detected any widespread fraud, and Trump’s own attorney general and election security director have said there’s no reason to believe the election was stolen.

When Jordan responded to the question, he neither confirmed nor denied the man’s claim of election fraud. Instead, he laid out a three-point outlook for 2024. For one, he said, “people are watching.” For two, he cited Georgia’s new law, specifically a provision requiring voters to show state-issued identification to cast an absentee ballot (current law allows them to do so with just a signature). Thirdly, Jordan said Republicans should file lawsuits “as soon as you see them start to play games” — a reference to states expanding use of drop boxes during the COVID-19 pandemic.

He also called on Congress to “investigate” what happened in 2020.

“I haven’t said anything other than, ‘I want to check it out,’” he said. “Because there are lots of Americans, including Democrats, who have big concerns about what happened in the election, and that’s why I said, let’s figure it out.”

Jordan has repeatedly used his official powers and media profile to amplify Trump’s election lies. Hours after the Jan. 6 insurrection, he and 146 other GOP congressmen voted to overturn the results in Arizona and Pennsylvania — key battleground states. He spoke at a “stop the steal” rally in Pennsylvania after the election and issued official letters calling for investigations and alleging the existence of “irregularities and improprieties” and “ election errors and misconduct.”

Congressional investigators, meanwhile, recently released text messages Jordan sent to White House Chief of Staff Mark Meadows just before the Jan. 6 insurrection. At the hearing, U.S. Rep. Adam Schiff, D-Calif., read a part of a text message he said an unspecified lawmaker sent to Meadows on Jan. 5. Jordan’s office confirmed to CNN that he sent the text message to Meadows, forwarding on legal advice that had been sent to him.

“On January 6, 2021, Vice President Mike Pence, as President of the Senate, should call out all electoral votes that he believes are unconstitutional as no electoral votes at all — in accordance with guidance from founding father Alexander Hamilton and judicial precedence,” the full text Jordan reportedly sent to Meadows, obtained by CNN, states.

“’No legislative act,’ wrote Alexander Hamilton in Federalist No. 78, ‘contrary to the Constitution, can be valid.’ The court in Hubbard v. Lowe reinforced this truth: ‘That an unconstitutional statute is not a law at all is a proposition no longer open to discussion.’ 226 F. 135, 137 (SDNY 1915), appeal dismissed, 242 U.S. 654 (1916). Following this rationale, an unconstitutionally appointed elector, like an unconstitutionally enacted statute, is no elector at all.”

Jordan’s spokesman did not respond to emails regarding the CNN report or the standing ovation.