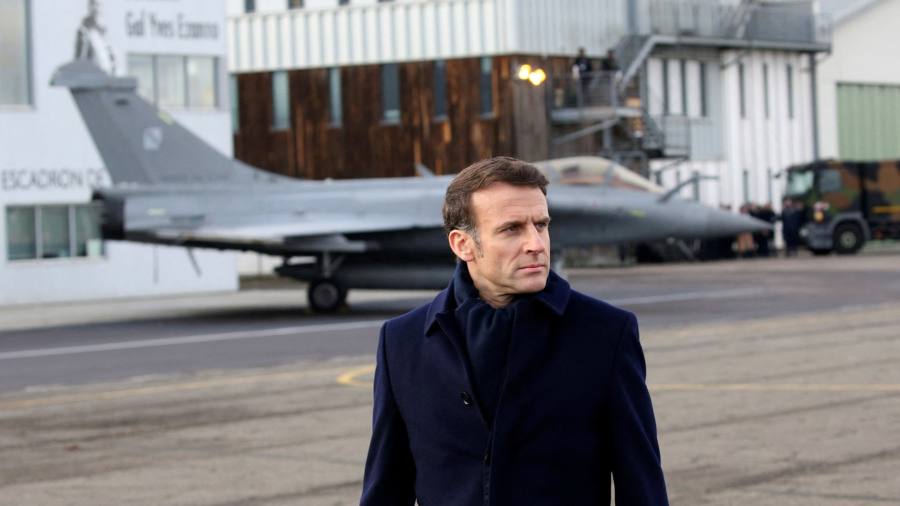 President Emmanuel Macron promised to boost French defence spending to the end of 2030 to reinforce the country’s capabilities in response to new global threats after Russia’s invasion of Ukraine.

“The new conflicts of our century will not be of our choosing,” Macron said in a new year speech on Friday at the Mont-de-Marsan air force base in south-west France. “There is no more peace dividend because of the aggression of Russia against Ukraine.”

He said the military budget for 2024 to 2030 would be €400bn, if parliament approved, with an additional €13bn in revenue coming from asset sales. That represents a 40 per cent increase in defence spending from €295bn in the last budget cycle from 2019 to 2025.

The French defence ministry said the government aimed to bring its spending to above 2 per cent of gross domestic product in line with Nato commitments, but declined to provide specific forecasts.

France has regularly fallen short of that target. According to Nato figures, France spent about 1.8 per cent of GDP on defence from 2014 to 2019, and 2 per cent in 2020, the last year data were available.

Germany last year vowed to hit the 2 per cent target and pledged a €100bn fund to modernise its army. Britain spends 2.2 per cent of GDP on defence and has not yet committed to a big increase in its military budget.

Nuclear-armed France began to increase its defence budget in 2017 under the leadership of then newly elected Macron. Those funds aimed to “reinvest and repair our armies”, he said on Friday, but more remained to be done. Under the new budget, defence spending would go up to €59bn annually to the end of 2030.

“Nuclear deterrence is what makes France different from other countries in Europe. We see anew, in analysing the war in Ukraine, its vital importance,” Macron said, adding that some of the extra military budget would be used to improve his country’s nuclear arsenal.

France will also use the larger budget to purchase new tanks, fighter jets and drones and refurbish existing equipment. Military intelligence spending would also be increased by 60 per cent.

Russia’s invasion of Ukraine last year raised questions among French officials over whether the military could face the challenge of such a high-intensity conflict given its limited stocks of equipment and munitions. France has also had to parcel out donations to Ukraine, such as its Caesar howitzers, because of short supplies.

In June, Macron called on domestic defence contractors including Dassault Aviation and Nexter Systems to go on a “war economy” footing so as to boost French capabilities. But analysts have said little measurable progress has been made since then, citing long delays before the government puts in orders and time it takes to manufacture such weapons.