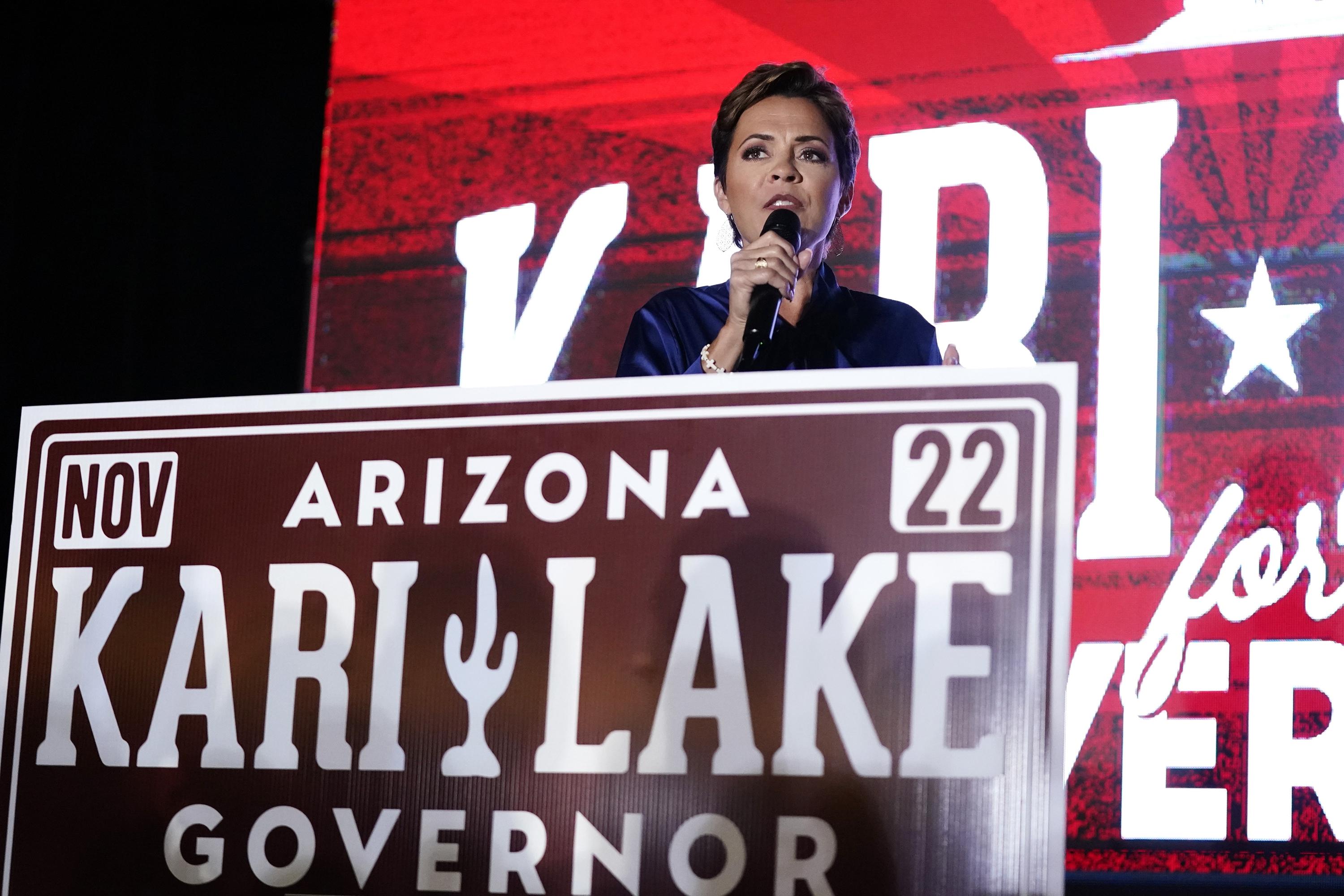 The contest is seen as a barometer of Donald Trump’s enduring influence after establishment Republicans came out in force behind Robson. Lake is closely aligned with the former president, who could gain allies with influence over how elections are run as he considers a 2024 White House campaign.

The winner will advance to the November general election to take on Secretary of State Katie Hobbs, who defeated Marco Lopez, a former mayor of Nogales and border enforcement official during Obama’s administration, in Tuesday’s primary.

Trump endorsed and campaigned for a group of candidates who supported his falsehoods about the 2020 election, including Lake, who says she would have refused to certify President Joe Biden’s narrow Arizona victory. Robson said the GOP should focus on the future despite the election from two years ago that she called “unfair.”

Trump-backed state lawmaker Mark Finchem won the Republican primary to oversee elections as secretary of state — Hobbs’ current job. Finchem was at the U.S. Capitol on Jan. 6, 2021 — the day of the riot — and claims Trump was cheated out of a second term. Trump-backed candidates for attorney general and legislative races also were leading.

Mail ballots favored Robson, but Lake overwhelmingly won polling place votes. Ballots left to count are mainly mail ballots turned in at the polls on Tuesday, including 125,000 from Maricopa County, which includes Phoenix.

Arizona, a longtime Republican stronghold, has become more favorable to Democrats in recent years because of explosive growth in and around Phoenix. The primary and the fall election will provide insight into whether Biden’s success in 2020 was a onetime event or the onset of a long-term shift away from the GOP in the state.

With such high stakes, Arizona has been central to efforts by Trump and his allies to cast doubt on Biden’s victory.

Federal and state election officials and Trump’s own attorney general have said there is no credible evidence the 2020 election was tainted. Trump’s allegations of fraud were also roundly rejected by courts, including by judges he appointed. A hand recount led by Trump supporters in Maricopa County, Arizona’s largest, found no proof of a stolen election and concluded Biden’s margin of victory was larger than the official count.

Though Trump is still the most popular figure inside the GOP, his efforts to influence primary elections this year have yielded mixed results. His preferred candidates in states such as Ohio and Pennsylvania prevailed in their primaries.

But in Georgia, also central to Trump’s election lies, his handpicked candidate for governor was defeated by more than 50 percentage points, and the GOP secretary of state was also renominated over a Trump-backed primary rival.

Trump hoped for more success in Arizona, where Republican Gov. Doug Ducey could not run for reelection.

Lake is well known in much of the state after anchoring the evening news in Phoenix for more than two decades. She ran as a fierce critic of the mainstream media, which she says is unfair to Republicans, and of those who oppose Trump’s “Make America Great Again” movement, including the family of the late Sen. John McCain, R-Ariz.

Lake claimed her campaign was “already detecting some stealing going on” in her own race, but she repeatedly refused to provide any evidence for the claim. She said Tuesday night that changing election laws was her top priority.

Robson, whose housing developer husband is one of the state’s richest men, mostly self-financed her campaign. The GOP establishment, growing increasingly comfortable creating distance from Trump, rallied around her over the past month with a series of endorsements from Ducey, former New Jersey Gov. Chris Christie and former Vice President Mike Pence.

“You have entrusted me with your most sacred possession in a constitutional republic — your vote,” Robson told supporters Tuesday night as she awaited election results.

Robson ran a largely old-school Republican campaign focused on cutting taxes and regulations, securing the border and advancing school choice. She also emphasized Lake’s prior support for Democrats, including a $350 contribution to the last Democratic president.

“I can’t vote for someone who supported Barack Obama,” said Travis Fillmore, 36, a firearms instructor from Tempe who planned to vote for Robson. He said he remains a Trump backer and believes the 2020 election was stolen from him, but Lake’s support for Obama was disqualifying.

Democratic nominee Hobbs, as Arizona’s top elections official, endeared herself to party voters with an impassioned defense of the integrity of the 2020 election, a stance that has drawn death threats. But she has been weighed down by a discrimination case won by a Black policy adviser from Hobbs’ time in the Legislature.

In the Senate race, Trump-backed Blake Masters emerged as the Republican nominee, The 35-year-old first-time candidate has spent most of his career working for billionaire Peter Thiel, who is bankrolling his campaign. Masters emphasized cultural grievances that animate the right, including critical race theory and allegations of big tech censorship.

Until Trump’s endorsement, the race had no clear front-runner among Masters, businessman Jim Lamon and Attorney General Mark Brnovich, all of whom jockeyed for his support.

Masters will take on Democratic Sen. Mark Kelly in the fall.

Republican state House Speaker Rusty Bowers, who gave testimony to the Jan. 6 committee in Washington about Trump’s pressure campaign following the 2020 election, was defeated by a Trump-backed challenger in his bid to move to the state Senate.

This story expires at 5:07pm on Thursday November 3rd, 2022 and will be deleted.