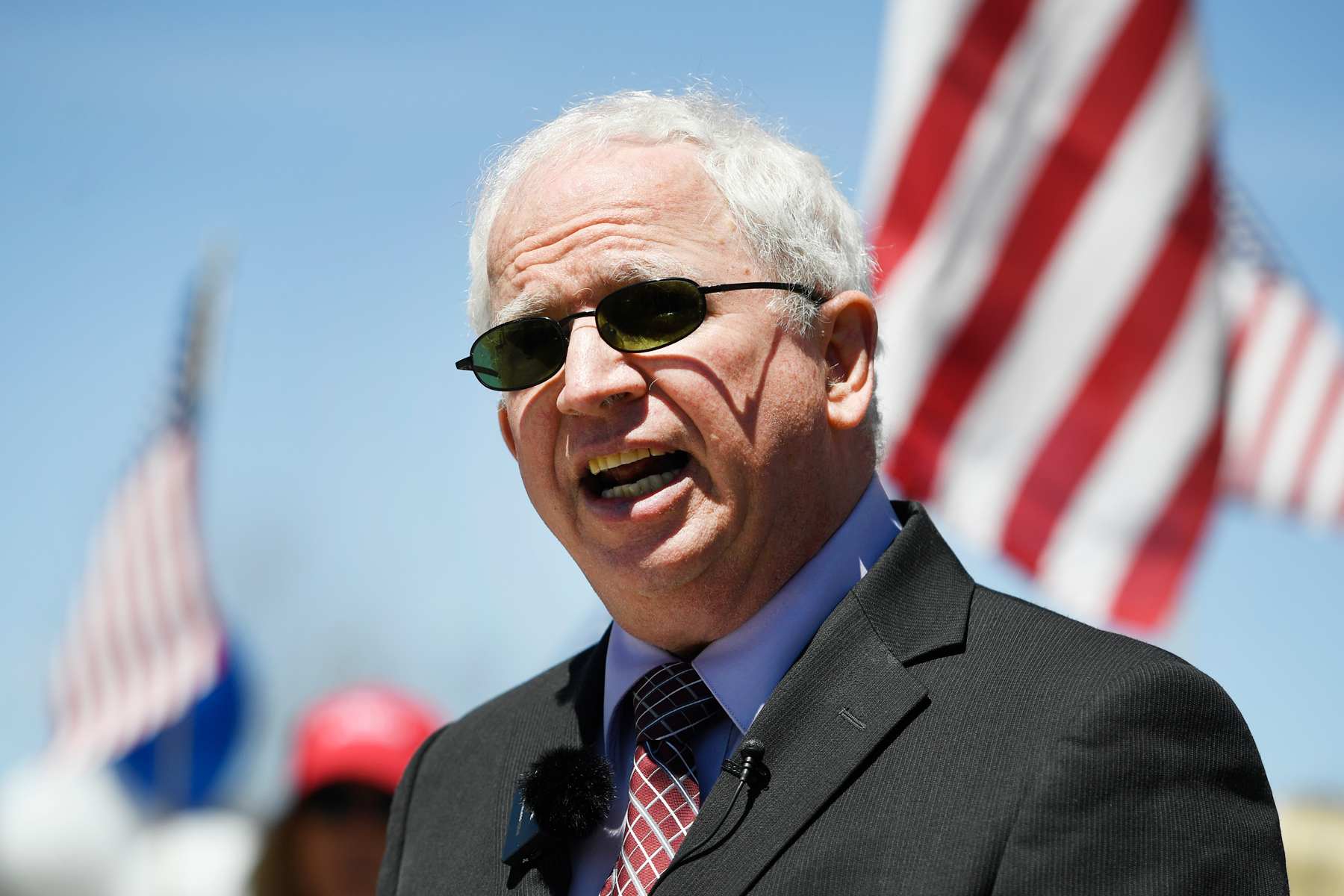 With the Justice Department and Jan. 6 committee taking a close look at Donald Trump’s efforts to overturn the 2020 election, he and his cronies could certainly use a fall guy, and it looks like they’ve found their patsy: right-wing lawyer John Eastman.

Eastman worked for Trump as the attorney devised legal strategies to overturn the election to keep the outgoing president in power. But, in recent weeks, Trump has confided to those close to him that he sees no reason to publicly defend Eastman, two people familiar with the matter tell Rolling Stone. The ex-president is also deeply annoyed with Eastman and all the negative “attention” and media coverage that the lawyer’s work has brought Trump and his inner sanctum, including during the ongoing Jan. 6 hearings on Capitol Hill.

Furthermore, to those who’ve spoken Trump about Eastman in recent months, the ex-president has repeated an excuse he often uses when backed into a corner, as investigators confront him with an associates’ misdeeds: He has privately insisted he “hardly” or “barely” knows Eastman, despite the fact that he counseled Trump on taking a string of extra-legal measures in a bid to stay in power and wrote the so-called “coup memo,” which laid out the facsimile of a legal argument for reversing Trump’s election defeat.

Behind closed doors, Trump will occasionally ask questions about Eastman’s fortunes, including bluntly inquiring: “Is [John] going to jail?” according to a source who has heard the former president say this. But publicly, Trump has stayed silent. Over the past several months, Trump has been strongly advised by lawyers and several associates not to openly discuss Eastman or his work — and to personally avoid the man altogether, according to three sources familiar with the matter. At this time, Trump, his legal advisers, and various political counselors would prefer to cut ties with Eastman and keep their distance, in a perhaps vain attempt to build a firewall between the lawyer who enthusiastically pitched strategies for delegitimizing the 2020 election outcome and the ex-president who repeatedly sought his help.

“It has been repeatedly communicated to the [former] president that he should not even bring up Johnny Eastman’s name because he is maybe the most radioactive person [involved in this] when it comes to…any so-called criminal exposure,” a source with direct knowledge of the matter says. “Johnny does not have many friends in [the upper crust of] Trumpworld left, and most people loyal to the [former] president are fine with him being left out on his own, to deal with whatever consequences he may or may not face.”

Indeed, the infamously garrulous Trump has publicly kept his mouth shut about Eastman, a lawyer whose work became integral to the scandalous efforts to nullify President Biden’s 2020 victory. (Trump even considered Eastman as counsel for his post-insurrection impeachment.)

Nowadays, in the top ranks of MAGAland, there’s a clear attitude towards Eastman (“Johnny,” as some Trump advisers derisively call him): He might be going down. So be it, as long as he doesn’t take anyone else down with him.

Eastman and a Trump spokesperson did not respond to requests for comment from Rolling Stone.

Eastman has become an increasing focus for the January 6th committee for his role in spearheading many of the Trump campaign’s efforts to overturn the election. Exhibits posted by the committee last week included excerpts of a deposition by Trump White House attorney Eric Herschmann in which he described a heated confrontation with Eastman the day after the insurrection where he told Eastman to “get a great fucking criminal defense lawyer” because “you’re going to need it.”

Shortly afterward, Eastman emailed fellow Trump lawyer Rudy Giuliani to say: “I’ve decided that I should be on the pardon list, if that is still in the works.”

“Any time you give legal advice and then feel compelled to ask for a pardon, it probably wasn’t good legal advice,” says Steven Groves, formerly a lawyer and then a spokesman in Trump’s White House.

In a nod to growing calls by the January 6 committee for a criminal investigation of Trump’s actions around the election, Trump released a 12-page statement, which The New York Times reported contains the seeds of a potential defense against criminal allegations that the former president attempted to thwart the transfer of power while knowing he had legitimately lost the election. The document cites a range of wild-eyed theories, including 14 references to the bogus election fraud conspiracy documentary 2,000 Mules, but it does not mention Eastman or his work that the former president relied on to make the case that his efforts to overthrow the election were within the law.

Eastman, a former clerk for Supreme Court Justice Clarence Thomas turned conservative constitutional law professor, was first welcomed into Trump’s orbit during the penultimate year of Trump’s term in office. Trump, enamored of Eastman’s skepticism of the birthright citizenship afforded by the constitution, increasingly came to rely on the attorney’s crackpot views of election law as the the odds of overturning Biden’s 2020 election victory grew longer. On behalf of Trump, Eastman authored briefs for the Supreme Court to intervene in the election in Trump’s favor — both ultimately discarded by the justices.

When the Supreme Court ultimately shut the door on Trump’s attempts to leverage the courts to stop the democratic transfer of power, Eastman took up the mantle of cobbling together a legal rationale for why, in blatant violation of the constitution, Vice President Mike Pence somehow had the authority to stop the counting of electoral votes on January 6.

But the idea that Eastman is becoming something of a fall guy for Trump and various Republicans’ efforts in 2020 and early 2021 is now so prevalent in influential conservative circles that it’s now being acknowledged by some of the former president’s favorite right-wing media stars.

“How many lawyers did Trump have? He had several…And John Eastman has turned into the fall guy,” Mark Levin, a Fox News and radio host, said on-air last week. “He’s a lawyer, he’s an advocate for the [former] president. Whether you agree with his legal judgment, his legal findings, or not, it’s what lawyers do.” (According to a New York Times report last year, Levin is indirectly responsible for landing Eastman in then-President Trump’s inner orbit — simply due to the fact that Trump had seen the attorney on a 2019 episode of Levin’s program.)

On Trump’s social media forum, Truth Social, the former president has remained silent about Eastman — even as he’s come to the defense of other aides and supporters now under scrutiny for their efforts to wage a coup against Joe Biden. In fact, Trump has “Truthed” about Elon Musk’s spat with Twitter, the Johnny Depp and Amber Heard trial, and the PGA tour — but hasn’t posted even a fleeting defense of Eastman.

When the FBI arrested Trump’s former trade advisor Peter Navarro for defying a subpoena from the committee, the former president thundered with outrage that “our great trade genius, Professor Peter Navarro, was just handcuffed, shackled, and put in jail.” Ginni Thomas, whose efforts to overthrow Biden’s victory in Arizona, received similar encouragement from Trump when The Washington Post uncovered her emails urging legislators there to ignore the voters’ will and proclaim Trump the state’s victor. Thomas, Trump wrote after the Post story, is a “Great American Patriot, the wonderful wife of Justice Clarence Thomas” who “fought for Voter Integrity in the Great State of Arizona.”

On Trump’s personal website, where the former president hosted written statements after his ouster from Twitter and before the launch of Truth Social, he’s been similarly mum. Eastman’s name appears on the site only twice, in hosted copies of the Supreme Court election briefs he authored in 2020.

Despite multiple stories about the January 6th committee’s interest in Eastman, however, Trump’s thumbs have remained unmoved on the subject of his onetime attorney’s fate. On Truth Social, where the former game-show host has offered a running commentary on the committee’s hearings, Trump has not once mentioned Eastman who, as president, he had once hailed on Twitter as a “Brilliant Constitutional Lawyer.”

Trump aides have remained similarly quiet on the subject of Eastman. His spokeswoman Liz Harrington has not mentioned the campaign lawyer since a tweet on January 6, when she hailed his speech at the rally on the mall “explain the rigged voting machine system that corrupt politicians kept in place for the GA runoffs.”