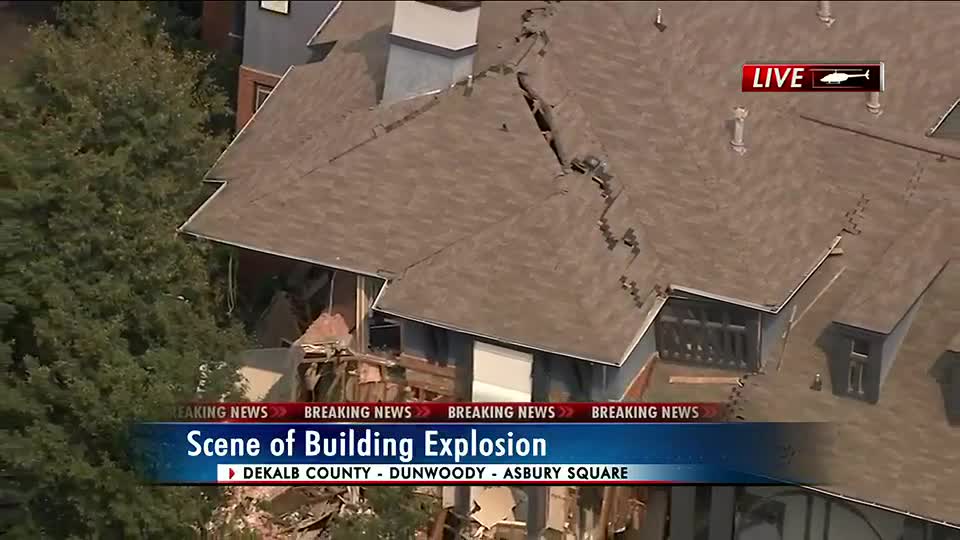 Police said they were called to the Arrive Perimeter apartments in DeKalb County around 1:24 p.m., where they encountered heavy gas fumes. Police were able to start evacuating residents.

DeKalb Fire Department said there are reports of at least two people who are unaccounted for.

At some point, there was an explosion, which initially trapped multiple people inside. In chilling 911 calls, dispatchers say “half of the building is gone.”

At 1:24pm, we received calls regarding an explosion at the Arrive Apartments. We are on scene with the Dekalb Co. and Sandy Springs Fire Dept. This is a very active scene and the cause of the explosion is under investigation. @DCFRpubaffairs will put out more when known.

Officials said several people are on the way to the hospital with burn injuries. It’s unclear if anyone is still trapped in the rubble. Firefighters are going unit to unit in parts of the building that are structurally sound.

Heavy rescue team crews are working to shore up the building so that they can get into areas that are still unstable. Firefighters said they are waiting to search at least three units. There are reports that two people are still unaccounted for.

Of the people rescued, at least one had injuries severe enough to be taken to the hospital.

Multiple law enforcement and fire agencies are assisting in the rescue effort. Officials said there are at last 75 firefighters at the location as well as technical rescue crews. Atlanta Gas Light crews are also on site assisting emergency responders.

All the roads surrounding the building are closed. Police are asking for anyone who lives at the complex but wasn’t impacted by the blast stay in their homes.

The blast was so powerful that it damaged surrounding buildings. NewsChopper 2 was over the scene, where there was a large crack in the roof and one side of the building with heavy damage.

“The entire building received some sort of damage,” firefighters said.

Eboni Thornton said she was in a moving truck outside the building when it felt like something fell on top of the vehicle. She said the whole vehicle shook. She was shocked at what she saw when she got out of the truck.

“The leasing office was collapsed on the left side, the double doors were blown out and I could hear a lady screaming her head off,” Thornton said.

Thornton said she saw a couple people limping and bleeding and being carried out of the rubble.

This is the second explosion at a Dunwoody apartment building in less than a year. Two people were injured in a fire and explosion at the Dunwoody Village apartments last December just before Christmas.

If y’all know Anyone who lives at Arrive Perimeter apartments check on them
A gas line blew up at the entrance and several people are trapped inside of the building pic.twitter.com/UFja2G2Hiw