Members of the Queen‘s extended family are preparing to say a final farewell to Her Majesty.

The Queen’s cousins, niece, nephew and distant relatives will come together to pay tribute at the Westminster Abbey service later today.

Some have shown their support by standing in for the Queen at royal engagements, others have been there at family gatherings or shared personal moments with the Queen.

While they rarely gather en masse, there have been several occasions in recent months in which they have, including the Duke of Edinburgh’s service of thanksgiving and the Queen’s Platinum Jubilee celebrations.

The Queen’s cousins Prince Michael of Kent, the Duke of Kent and the Duchess of Gloucester will all be in attendance with their families.

Also present will be Princess Margaret’s children, Lady Sarah Chatto and Lord Snowdon, who enjoyed a particularly close relationship with their aunt the Queen.

Here, ahead of the Westminster Abbey service, FEMAIL  takes a look at the minor royals expected to attend… 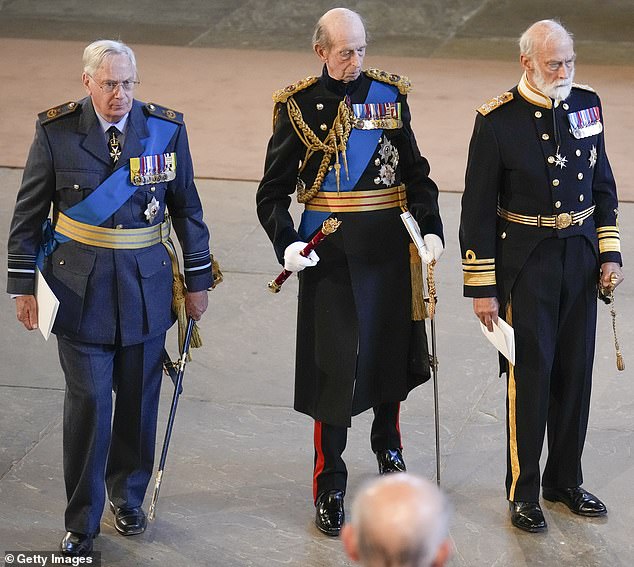 The Queen’s cousins Prince Richard, Duke of Gloucester, Prince Edward, Duke of Kent and Prince Michael of Kent attended the procession for the lying-in-state last week. They’ll be among the members of the Queen’s extended family who will gather to pay tribute today

The furniture designer enjoyed a close relationship with the Queen and used to holiday with the Royal Family as a child. 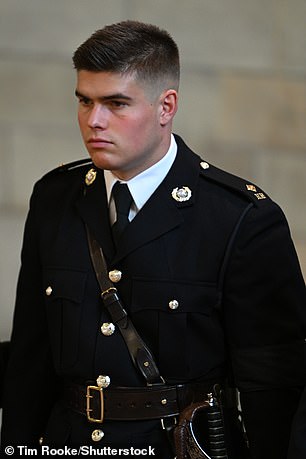 Lady Sarah Chatto: The Queen and Prince Philip’s much-loved niece Sarah Chatto  was born in 1964 — the last royal baby born at a palace rather than a hospital — within weeks of cousins Prince Edward, Lady Helen Windsor and James Ogilvy. She is known to have had a close relationship with the Queen.

Daniel Chatto: The husband of Lady Sarah will likely accompany his wife and their two children.

Samuel Chatto: The eldest of Lady Sarah Chatto’s children, youthful-looking Samuel, 25, is  potter and artist and a hit on Instagram with 86,000 followers.

Arthur Chatto: Sporty Arthur Chatto, who is a member of the Royal Marines and used to work as a personal trainer is 29th in line to the throne. 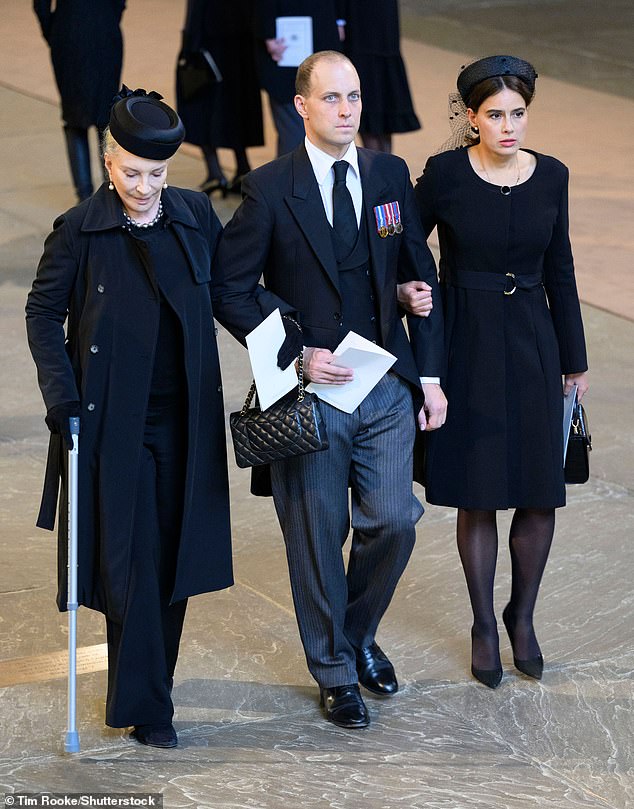 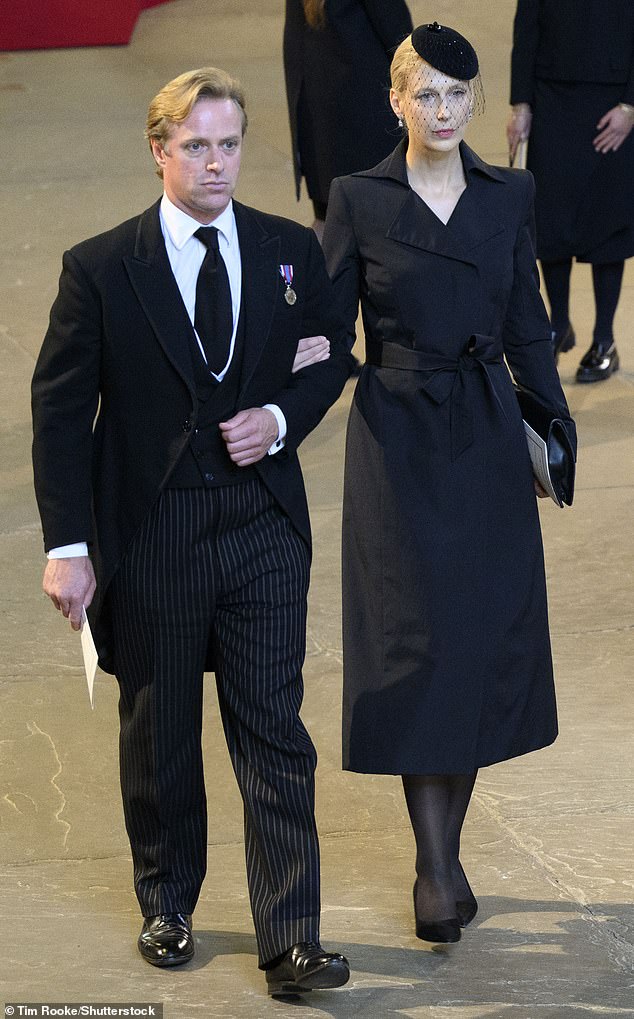 Richard, Duke of Gloucester: The Duke is the youngest grandchild of King George V and Queen Mary and a paternal cousin of the Queen. He carries out duties on behalf of the royal family and is patron of many societies.

Birgitte, Duchess of Gloucester: The Dutch-born Duchess married Prince Richard in 1972 and is a full-time working member of the Royal Family. She shares three children with the Duke – none of whom undertake official duties. 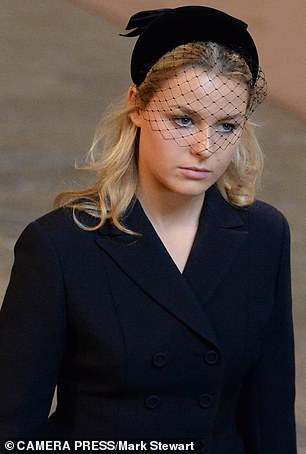 Lady Rose Gilman: The daughter of the Duke and Duchess of Gloucester, Lady Rose, 42, does not undertake royal duties. However it is expected she will be at the funeral on Monday. She will likely attend with her husband George.

Lady Davina Windsor: Lady Davina is the elder daughter of the Duke and Duchess of Gloucester. She is 34th in the line of succession to the British throne as of September 2022.

Alexander Windsor, Earl of Ulster: Alexander Windsor attended Prince Philip’s memorial service earlier this year. He is the son of the Duke and Duchess of Gloucester, and will likely join his sisters and parents at the event.

Edward, Duke of Kent: Edward is the son of George VI’s brother and is a first cousin of Her Majesty. The Duke is involved with over 140 different charities, organisations and professional bodies on behalf of the Royal Family.

Duchess of Kent: Edward’s wife will likely join him at the event. When she retired from the royal circuit, many thought the Duchess had become something of a recluse – but the truth was very different. It later emerged she had been teaching music at a state primary school in Hull – most of the time in anonymity, for 13 years.

Lady Helen Taylor: A peripheral royal happy to lead a life largely under the radar, Lady Helen, daughter of the Duke and Duchess of Kent, will likely pay her respects to the Queen accompanied by her son Cassius, who she shares with art dealer Timothy Taylor. 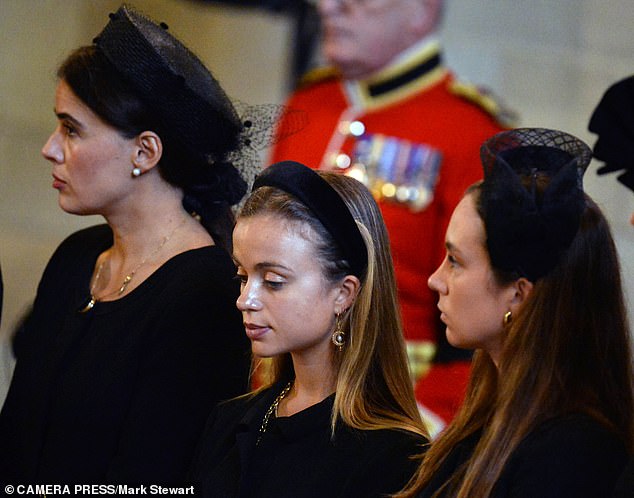 Lady Frederick Windsor, Lady Amelia Windsor and Lady Marina Windsor at Westminster Hall for the lying-in-state of the Queen

George Windsor: The Earl of St Andrews, a former diplomat, is the elder son of Prince Edward, Duke of Kent, and his wife, Katharine, Duchess of Kent. The 59-year-old father-of-four will likely attend with his wife Sylvana Tomaselli. 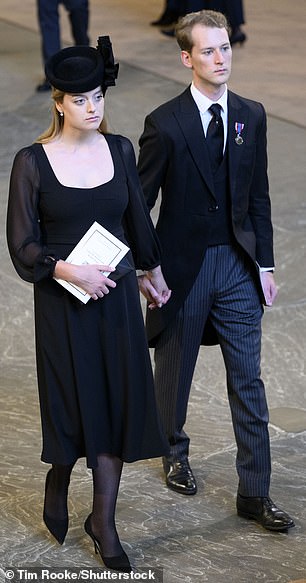 Lady Marina Windsor: Lady Amelia’s elder sister Lady Marina will also likely be in among the guests at the event.

Lord Downpatrick: The 33-year-old is the brother of Lady Amelia Windsor, son of George Windsor and Sylvana Tomaselli. Edward, or ‘Eddy’ as he’s referred to by friends and family, works as a fashion designer, having ditched a former career in the City.

Lord Nicholas Windsor:  Lord Nicholas will likely attend the event on Monday, He forfeited his place in the line of succession to the throne when he converted to Catholicism in 2001, following the example of his mother, Katharine, who went across to Rome in 1994.

Princess Alexandra: Princess Alexandra is the sister of the Duke of Kent. She will likely be in attendance. She is 39th in line to the throne. She has carried out many royal duties on behalf of the Queen over the years, including several foreign tours.

James Ogilvy: James is the eldest son of Princess Alexandra and her husband Sir Angus Ogilvy.

Flora Vesterberg: Flora, who is the daughter of James, married her Swedish beau last year in a service attended by the Earl and Countess of Wessex.

She is also likely to make an appearance at the funeral. She attended the memorial service for Prince Philip in March. 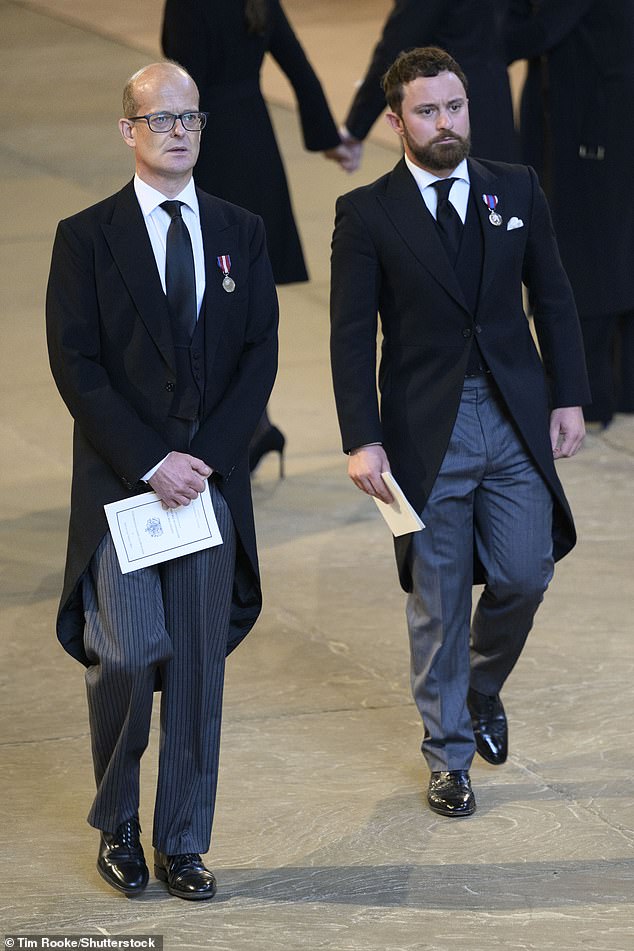 Lord Nicholas Windsor and Lord Downpatrick, descendants of the Queen’s cousin, will attend

Timothy Vesterberg: Flora’s new husband Timothy joined her at the Service of Thanksgiving for the Duke of Edinburgh in March. He is likely to attend alongside his wife.

Alexander Charles Ogilvy: Flora’s brother Alexander may also make an appearance at the event on Monday.

Frederick Windsor: Lord Freddie is the son of the Queen’s first cousin Prince Michael of Kent and 53rd in line to the throne. He attended Prince Philip’s memorial service earlier this year.

Sophie Winkleman: Sophie Winkleman, 41, who is the half sister of TV presenter Claudia Winkleman famously starred as Big Suze in Peep Show. She often attends royal events and will likely want to pay her respects to the Queen.

Penelope Knatchbull: Countess of Burma is also likely to be in attendance.

King Charles: The new King will be in attendance at the service.

Queen Consort: Camilla, 74,  was known to have enjoyed a close relationship with the late Queen – who gave her the title of Queen Consort ahead of her death in February 2022

Princess Anne: The Princess Royal, who is the Queen’s only daughter, has been dutifully accompanying her mother’s body from Balmoral to London. She is likely to attend the funeral with husband Timothy Lawrence.

Timothy Laurence: The 67-year-old retired Royal Navy Vice Admiral, husband of the Princess Royal, will be in attendance.

Prince Andrew: After a tumultuous year for Prince Andrew, the Duke of York is likely to be in attendance. He was renowned as the Queen’s favourite child.

Sophie Wessex: Sophie, Countess of Wessex, 57, was famously close to her mother-in-law and has appeared grief-stricken

Lady Louise Windsor: Lady Louise, 18, who is the Queen’s youngest granddaughter, is studying at St Andrew’s University. She was known for her close relationship to her grandfather who she has inherited a love of carriage-driving from

Prince William: The Queen’s grandson and first in line to the throne will be in attendance with Kate.

Kate Middleton: The new Princess of Wales will join her husband Prince William for the event

Peter Phillips: The Princess Royal’s son, separated from wife Autumn Phillips, is likely to be in attendance. He is believed to have been the Queen’s favorite grandson.

Zara Tindall: The Queen’s granddaughter, who is the daughter of Princess Anne, will likely be in attendance. She joined the family days ago in Balmoral to look at the floral tributes, and appeared devastated by her grandmother’s death.

Mike Tindall: The former England rugby player is known to have been close to both his mother-in-law Princess Anne, and the Queen. He will likely want to show his support to the family during this time.

Princess Beatrice: Princess Beatrice, 33, who is the eldest daughter of Prince Andrew and Sarah Ferguson, will be in attendance. She was highly emotional when she attended Prince Philip’s funeral and memorial service.

Princess Eugenie: Princess Eugenie will be joined by her husband Jack Brooksbank. Eugenie and Jack welcomed son August in February 2021 and gave him the middle name Philip after his great-grandfather

Jack Brooksbank: Princess Eugenie’s husband Jack Brooksbank will also likely attend. The occasion will be particularly poignant for Jack, who lost his own father to Covid in November 2021, just days before their son August’s christening.