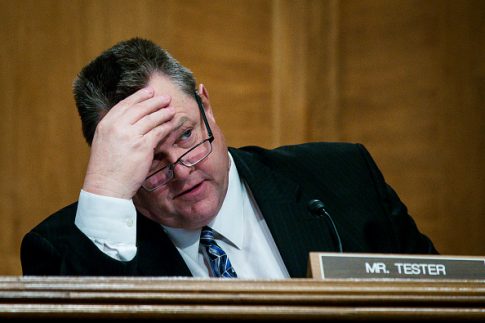 Claim: Citizens United v. Federal Election Commission is “the worst decision the Supreme Court has ever made.“

Who said it: Sen. Jon Tester (D., Mont.), the so-called centrist Democrat who has voted 91 percent of the time with President Joe Biden’s agenda and opposed the confirmation of Justices Neil Gorsuch, Brett Kavanaugh, and Amy Coney Barrett.

Why it matters: Tester made the superlative claim on Monday as he introduced a constitutional amendment to overturn the 2010 Citizens United decision, which he credits with having destroyed “democracy” by shielding “big money” corporate donors from scrutiny.

Context: The Supreme Court has handed down far worse decisions in its history. Citizens United is not even in the top five.

In the 1857 case Dred Scott v. Sandford, the Court upheld the legal basis for chattel slavery in the United States, ruling that an enslaved black man who had traveled to free territories had to be kept in bondage. The case catalyzed support for the abolition of slavery, eventually leading to the outbreak of the Civil War.

The Supreme Court’s decision in Plessy v. Ferguson (1896) affirmed racial segregation laws under the “separate but equal” doctrine, leading to the shameful era of Jim Crow laws in the South.

The High Court’s 1927 ruling in Buck v. Bell permitted the forced sterilization of the mentally infirm “for the protection and health of the state,” according to Justice Oliver Wendell Holmes, who infamously declared that “three generations of imbeciles are enough.”

In 1944, the Court ruled in Korematsu v. United States that President Franklin D. Roosevelt’s (D.) internment of Japanese Americans during World War II was justified to protect the nation against foreign espionage efforts.

And in 1973, the Court ruled in Roe v. Wade that the Constitution protected a right to abortion. Both liberal and conservative legal scholars have long considered its reasoning to be shaky, and it fomented decades of acrimonious Court decisions around social issues until being overturned last year.

Analysis: Tester was aware that he was making a sweeping claim, noting in a Twitter video during his press conference that the Supreme Court had its fair share of bad rulings. Even the president of End Citizens United, Tiffany Muller, made a more qualified statement Monday, calling the Court’s opinion “one of the worst decisions in modern history.”

Tester is also not immune to the allure of taking money from corporate interests. An Associated Press fact check found Tester received more cash from lobbying groups than any other U.S. senator during the 2018 election, including from big corporate banks like Goldman Sachs.

Democrats frequently accuse Republicans of seeking to divide the American people with exaggerated, extremist rhetoric. A careful Washington Free Beacon review of the facts shows that Tester was doing exactly that.

Verdict: We rate this claim 4 Clintons.