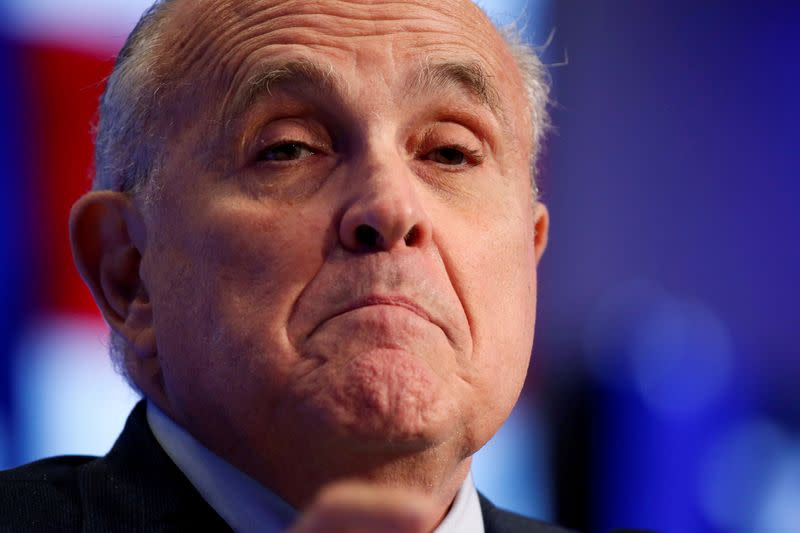 (Reuters) – FBI agents recently returned the cell phones and other electronic devices they had seized from Donald Trump’s former attorney Rudy Giuliani, in a possible sign the investigation into whether he failed to register as a foreign agent of Ukraine could be winding down, his attorney said on Wednesday.

Robert Costello, Giuliani’s lawyer, told Reuters he has not been officially notified yet whether federal prosecutors in Manhattan are closing the investigation.

But he said the return of the devices is a positive sign for his client.

“I have not been officially told that its over,” Costello said. “It is possible they could make some startling new discovery…but we have always been confident that he didn’t do anything wrong.”

A spokesperson for the U.S. Attorney’s office declined to comment.

Prior to the 2020 presidential election, Giuliani, who served as personal lawyer for former U.S. President Trump, and one-time mayor of New York City, led an effort to dig up dirt on then-Democratic contender Joe Biden and his son Hunter in Ukraine.

Federal prosecutors have been looking into his activities now for more than two years.

Costello told Reuters that Giuliani and he voluntarily met with federal prosecutors and FBI agents to discuss the investigation and answer questions in February.

His comments came shortly after the New York Times reported that the criminal inquiry by the U.S Attorney’s Office for the Southern District of New York into Giuliani’s ties to Ukraine during the presidential campaign was likely to end without any charges.

He is still entangled in several other pending investigations involving post-2020 election matters.

In recent months, prosecutors in Washington subpoenaed Trump’s allies in battleground states who signed onto false slates of electors in a failed bid to overturn the election results. Their subpoenas have asked for copies of all their communications with Giuliani and other attorneys who were involved in Trump’s campaign.

He has also been ordered to testify before a grand jury in Georgia probing Trump’s alleged attempts to overturn the 2020 election results.

This story expires at 4:26pm on Thursday November 3rd, 2022 and will be deleted.